The Girl at the Piano 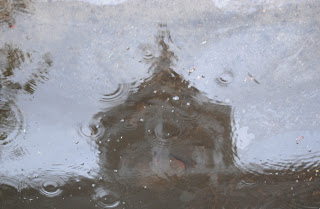 I thought I'd get the story up before I head out to jury duty. I'm not sure how much I'll be around this week. If I'm not here, miss me, okay?
---
I’ve mentioned my interest in theology before. This story, which occurred back in the 70s, gives a brief glimpse of an event that influenced my life. Lately I’ve been looking for reflections in puddles to photograph and took this photograph of a steeple’s reflection last week.
---
My theological journey got a jump start when I was in the 11th grade. Mike, a friend of mine, told me about this girl who played the piano at his church. As she attended the other high school in the county, my only way to meet her was to go to his church and Mike suggested I drop in on a Wednesday evening service. Mike was a Pentecostal, which didn’t mean a lot to me at that time. After all, Presbyterian and Pentecostal both starts with a P so how much difference could there be? In other words, I wasn’t prepared for what I was about to experience.

Mike’s church was a white-washed wooden building located in Sunset Park, an older neighborhood across town. There was no parking lot, so I had to park along the street down the road and as I had allowed for no such contingencies, the services had already started as I walked up the steps. I was greeted at the door by an older woman. You’d thought I’d said something bad about her mama when I asked her for a bulletin. She snapped, assuring me that their services were led by the Spirit, which I learned in time lead them the same way every week. I went into the sanctuary. Mike, my friend, was up front. The girl, I can’t remember her name, was at the piano. I took a seat in a pew near the back.

We sang a few hymns, which tended to be familiar and for the first few minutes everything felt pretty comfortable. Then everyone suddenly ran up front. There was no announcement to this movement, but soon they all sounded and appeared as if they were trying to outdo one another in their prayers as they raised their voices to God. Much of it was unintelligible. Some danced and others lay on the floor. I caught a glimpse of my friend Mike and of the girl at the piano, both caught up in this conflagration. This was a far cry from the decently and in order Presbyterian services that I was use to. It made even the looser Baptist services I’d attended with friends look down right stiff. Looking around, I was the only one left in the pews, sitting there like a knot on a log. Then I noticed a guy from school. He was leaning against the door frame at the back. He nodded for me to join him out on the front porch, so I followed.

The evening air outside was much cooler than the un-air conditioned church. We sat on the steps. I didn’t know this guy very well. He was a year ahead of me and as it turned out was the preacher’s son. He pulled out a joint and offered it. I quickly declined, figuring there was no place worse than the front steps of a church to bring down the wrath of God. He put it away and pulled out a pack of cigarettes and lit one. Even that seemed sacrilegious to me. We talked. He wanted to know why I was there; assuring me that he was only there because it was easier than dealing with the wrath of his father. I could only imagine what his dad would do if he found him smoking on the steps. I hemmed and hawed about my reasons for attending, not wanting to tip my hand about the girl at the piano. After ten or fifteen minutes, he said we need to get back inside. He buried his cigarette butts under a shrub and we walked up the steps and back into the warm building.

The service continued for another hour and a half. Before the sermon there were several testimonies. I don’t remember much about what was said except for this one man who made a bold assertion about how he and his family had come to this church from Grace Baptist, a large church on the north side of town where no one was saved. Although I wasn’t up for defending Baptists, I found the statement pretty arrogant. I later learned they believed you were not saved unless you had “signs following,” which meant speaking in tongues, and had been baptized their way, which not only excluded Baptists but also Presbyterians.

I sat through that service, counting the minutes till I had a chance to meet the girl at the piano. Mike was right, she was beautiful. She had long flowing brown hair that seemed to go with her flowing dress that went to her mid-calves. Her dress seemed out of place as this was in the 70s and most dresses were way above the knees. Like all the women there, she wore no makeup and no jewelry, but she was a natural beauty and didn’t need any. When the service was over, I headed up front to catch Mike and to be introduced to the girl. But before I got there, the preacher grabbed me and started asking questions. He wanted to know where I went to church and what I believed. I told him I was a Presbyterian, which set him off on a tirade about the Trinity. It turned out this was a United Pentecostal Church. Not only do they believe you should have the experience of speaking in tongues, they do not believe in the doctrine of the Trinity, instead holding to some kind of oneness doctrine. For the next hour, long after my dream girl at the piano had left the premises, that preacher held me hostage as he bombarded me with his church’s doctrine and his ideas about what was wrong with the Trinity. I was woefully unprepared to defend or even state what it was that I believed.

It was after ten when I got home that night. I went into my father’s office and pulled out his copy of the Westminster Confession of Faith and I began to read up on the Trinity. There was a nice index in the back which directed me to the right sections and footnotes that gave passages in the Bible for support. I began my study. Later that week, I’d talked to the preacher at my church who gave me some other stuff to read. I began to make notes and to organize my thoughts. When the next Wednesday rolled around, I was back at Mike’s church, loaded for bear. I’m not sure the preacher knew what hit him as this cocky 17 year old member of the high school debate team came in with answers and challenges. After the service, we talked for another hour, neither of us giving ground. Again, I missed my chance to talk to the girl at the piano, but by this time I wasn’t just on a quest, I was on a crusade. My faith had taken on a new dimension as I had to articulate what it was that I believed. As for the girl at the piano, we talked a few times but never went out. She wasn’t allowed to go to the movies or go to the beach, the two options that I knew for a date.

When I ran into Mike a couple years after high school, I asked what had become of that girl at the piano. "She married the preacher’s son," he said. The look of shock on my face must have caused him to reassure me that the boy had cleaned up his act and had become a preacher himself, following in his dad’s footsteps.
Click here for more of Sage's Memories and Recollections.
Posted by sage at 12:01 AM