Walking Along the Coldwater 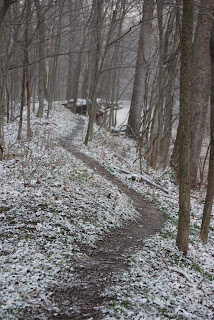 This evening, after an early dinner, I took off north of town to check out the Coldwater River. The stream is maintained by a local chapter of Trout Unlimited and with trout season just a few weeks away, I thought I’d check it out. It was also good to be out one more time this season with the wind biting my face and feeling snowflakes land on my nose. The temperature was a bit below freezing and a strong wind was blowing out of the west. As the evening approached, snow increased. 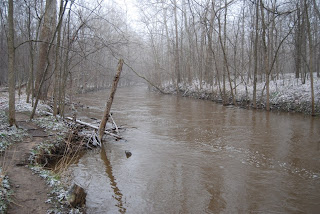 The Coldwater is a good wading stream, but it’s so high due to our rain that it would suicide to try to wade in it now. With all the rain turning the water muddy, it doesn’t look like the clean trout stream it supposedly is. Also, with the river up, most of the rocks were well underwater and invisible to the eye. The stream looks to be fairly clear of logs, even though the banks are lined with sycamore trees. 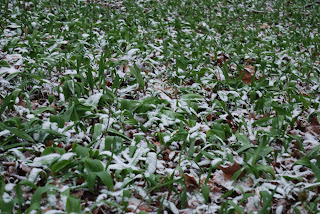 Spring is trying to make its appearance here, but the early risers got dusted with snow.

The poor spider who tried to set his invisible trap had it exposed by the snow. 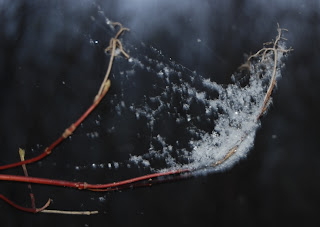 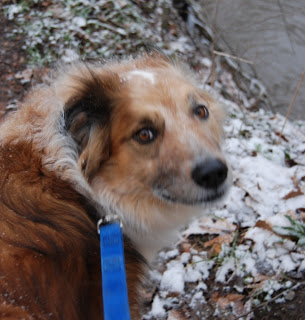 Trisket (don’t ask, my daughter named him) loves to be out with me, but he is terribly afraid of cameras. It’s a long story. He equates cameras with flashes which he equates with lightning and when a storm approaches, he’s given a tranquilizer. That’s right; the dog is a dope-head and during thunderstorm season, he goes through a few prescriptions of pills. All that to say that he wasn’t happy when he saw my camera coming, but I did trick him into getting a head shot. He is a pretty dog and very loyal and smart.

I kept hiking until my camera was requiring a flash (which really freaked the dog out). Figuring I was running out of light (hard to tell with the gray skies), we turned around and headed back to the truck. By the time I got home, it was dark. I placed a fire in the hearth and am sitting by it as I write this post and nurse a glass of aged rum on the rocks.
Posted by sage at 9:12 PM