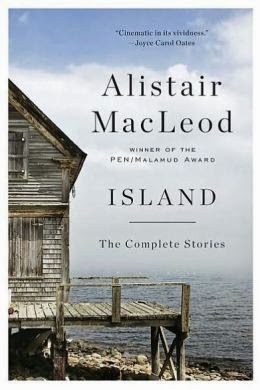 This is a wonderful collection of short stories that are set in and around Nova Scotia or about people who are from the Maritime Islands of Canada.  The author, who was raised on Cape Breton, draws upon the rich heritage of his childhood home to create characters grounded in a mystical setting.  There great variety in these stories.  Some deal with coming of age themes: growing up, leaving home, and learning the truth about Santa.  Many of the stories deal with loss: of a spouse, a lover, child and a horse.  And then there are stories of change: a new way of life, new stages of life, and the seasons.  Throughout the stories there is a connection to home and even one deeper, across the sea to the islands of Scotland. The characters are involved in a host of occupations: mining, fishing, lobstering, tending lighthouses, hiring out on Great Lake freighters.  Although the characters may leave their home for jobs (miners going to West Virginia and even Africa), there is a magnetic connection to the islands as seen in miners making sure a fellow miner's body parts are returned home.

MacLeod is a master at providing great depth within a short period of time.  In "The Vastness of the Dark,"  a story that takes place on the day of a boy's 18th birthday, we learn of his father's and grandfather's history as miners in the coal veins that are playing out on Cape Brenton.  The story is set in the late 1950s.  He has decided to leave home and he recalls with detail how his day begins.  Before leaving the island, he stops to tell his grandparents goodbye and we pick up more of the family history.  His father had also left the island, but had come back to take his grandfather's place in the mine (which has since closed).  In a way, his setting out is the same as his father's.  He hitches a ride with a salesman, betraying his home as he says he's heading home to Vancouver.  The salesman brags of "getting lucky" in the mining towns where there are a large number of widows.  Instead of exciting the boy with the possibility of a sexual encounter, he finds himself repulsed.  He recalls a trip with his father and grandfather who went to help the miners trapped underground and from collecting coins in school for the families who lost their father.  His disgust rises as he realizes this man could be hitting on his own mother. Leaving the salesman behind, he is picked up with a group of guys heading back to a uranium mining job in Ontario.  Realizing that they, too, are from Cape Breton, he drops his story of being from Vancouver and admits that he is also from the Cape.  This long story all takes place on one day, his 18th birthday.

These are stories to be cherished.  MacLeod beautifully captures the lure of his homeland.  When his characters leave the Maritimes for jobs in the West, the reader feels their pain as they travel the long highways toward Toronto.  I recommend this book.
Posted by sage at 4:39 PM 15 comments:

Where's Sage? He was last seen flying across the ice

Yep, that's me.  I've not dropped totally off the side of the earth, at least not yet.  However, there have been times this winter that I was ready to jump of the edge.  It has been a long winter and because of all that was going on with me (ie, my absence here), I haven't had nearly enough time to cross country ski (of course, that doesn't mean that I didn't ski, for I did, just not as much as I wanted to).  And the weather has been so cold that only in the last week have the rivers opened up enough to canoe!

On Sunday, I got a text from a friend telling me the ice was perfect for ice boating.  Friday and Saturday had been warm days and the top layer of ice had melted then when the temperature reverted back to the deep freeze on Saturday night, the water refroze into a slick surface (except where the ice fishermen had dug holes).  Knowing that I was interested in experiencing ice boating, he told me to come over to his house on the lake after church.  I wasted not time getting there!

I can't believe how fast you can go on one of these boats--much faster than sailing on water.  The wind just scoots you across the lake.  I read a bit on ice boating and one article said you could go five times faster than the wind (which was probably blowing around 20  mph).  Of course, we weren't going 100 mph, as these were not high performance boats, but we were still moving and being that close to the ice it seemed even faster.  Yes, we were wearing helmets and every bit of your skin had to be covered as the temperature was in the mid-teens (~-10C).  But it was fun!

Of course, near the mouth of the lake there was a section where the water was not frozen and one had to avoid it.  It was easy to see as there were a few swans camped out in the open water, like bouys!

I've missed all winter the sound of canvas luffing in the wind.  Adding that to the sound of the blades cutting across the ice, it was mystical. Michigan doesn't have as many great days for ice boating, I'm told, as they do on the other side of Lake Michigan where the conditions are often more favorable.

Soon, the ice and snow will be gone and I'll be launching my boat... Until then, ice boating has wet my appetite for the sail.  (Right now, on my closed in porch, I am restoring my boom--last spring I redid the mast for my boat).

This winter has been tough-not because of the snow and cold temperatures for I enjoy winter and the weather has been perfect.  But the past four months have taken their toil on me and consequently I haven't felt much like writing the kinds of things I enjoy sharing here.  Even on the cross country ski trips, I have tended to be locked into my own head, trying to figure things out.  However, I am thinking about starting a private blog (and if you are interested, you can let me know, as I won't have it publicly available) to share some of these "other adventures" as I also look to collect them for memoirs.

I hope you have enjoyed your winter and will have a blessed spring.