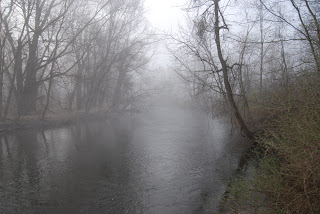 Spring along the Thornapple, photo by Sage

Tropical weather has come to the upper mid-west. Since Friday, we’ve been getting up into the high 70s and low 80s. Trees are beginning to bud out. Dogwoods are beginning to unfurl their flowers and in a few days, the highways will be lined with white flowers. The populous, having suffered from a lack of sun for the past six months, are now noticeably more cheerful. Instead of reading by the fireplace, I now sit on the swing on the back porch, the cracking flame being replaced with the chirping of birds and the singing of insects. Thanks to nasal spray, life is okay. I won’t say it’s as great as all the giddy people around me think it is, for I miss winter and the snow, but it’s okay. After all, trout season opens this weekend. The negative side is that the great Michigan miniature air show is about to begin as zillions of mosquitoes take the sky with the sole purpose to make life miserable. Then, all these happy people will be longing for winter. 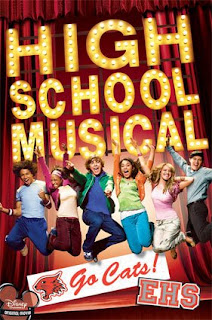 I started this weekend by taking my daughter on a date to her school’s “movie night,” which is sponsored by the PTA. (It was a cheap date!) I think I was the only one in the crowd who had not seen Disney’s “High School Musical.” The kids and many of the parents sang and recited lines as they whipped around glow-light sticks. Obviously, this event is a training exercise for the day they’re old enough to go to the Rocky Horror Picture Show and really cut loose. I came away with mixed feelings about the movie. On the right hand, it encourages kids not to bow to peer pressure and to reach for their dreams. On the left hand, it encourages kids to take things into their own hands as the students in the film hacked into the school’s computer system, causing a power failure, which allows the star athlete miss enough of the game and the school’s brain to miss enough of the academic Olympics so that together they auditioned for the school musical. I’m sure the film will help create among our children self-confident adults who are also budding anarchists.

Saturday morning, my daughter, the dog and I took the canoe out for the first time of the season. With no foliage, we had an interesting look into the woods and swamps. We also got a first hand look at a Canadian goose sitting on her nest out in a high marshy area surrounded by water. The bird sat still as we paddled within 10 feet of her and her nest. I’d thought this was early in the season for sitting on the nest, but I must be wrong.

Sunday night I watched the 1955 Humphrey Bogart film, “We’re No Angels.” It was a real treat. Three cons escape from prison and plan to rob a family who they discover are about to lose everything. With great comedy, instead of robbing the family, they help them out. It’s Christmas after all! There are some great lines in the film, such as when they decide to go back to prison, with Bogart quipping, “there’s a better class of people there.”

Yesterday was so busy I didn’t get time to do any “Monday Morning Ramblings.” It’s a good thing I’ve received a reprieve from jury duty this week—I still have to check in next week and see if they need me. So here’s my Monday ramblings—a day late and a dollar short…
Posted by sage at 9:34 AM