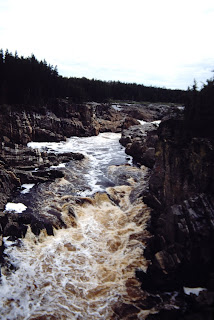 Bone’s 3-Word Wednesday writing exercise this week has the following words: “Lost, Wave, Lined.” Here is my assignment—it’s fiction even though I’ve traveled by canoe into the northern Canada. This photo was taken in August 1992 on a 200 mile/10 day canoe trip to the James Bay via the Missinabi River.

We lined the boats through the rapids. There was no safe way to run the rapids in an open boat and this far north we couldn’t risk capsizing, nor was there an easy trail to portage. Since we needed to make good time to meet the train on Wednesday, lining was the best option. Ropes were tied to the bow and stern painters on each canoe, extending their length. Gear was securely tied inside the boats. We agreed to take one boat through the rapids at a time, with the other crew members waiting downstream in case there was a need for a rescue. The person in front held the bow line, and helped set the canoe’s direction. The water was allowed to move the canoe, while the stern paddler held the back line, controlling speed while assisting with the canoe’s direction. Like puppets, the first two boats navigated the turns and the ledges through the rapids without taking on much water. As the last boat started down stream, Chuck slipped and fell into the river. As the water swept him downstream, he dropped the stern line and the canoe tracked sideways as a wave filled the boat with water. As Chuck crawled out of the river, the canoe was caught for a moment on a submerged rock. It flipped the boat momentarily, but the craft righted itself and drawing much more water, banged through the rapids. It came to a stop in the shallow waters of a on a rock garden at the base of the falls. The boat was damaged, but nothing so severe that couldn’t be patched with duct tape. Luckily, no gear was lost, but everything was wet. We immediately set up camp and built a fire, setting out to dry out the gear. There was no reason try to rush; we could catch the Friday train.

Today's Update: It's been depressing. It’s snowing like crazy, which I really don’t mind, but this inch an hour snowfall (that started at 8 AM and is to continue till evening), is more than we bargained for this time of the year. The roads have been slippery. Maybe, however, it's a good thing I haven't put away my skis. What's really making the day depressing is that I got word late last night of the death of a man who'd become a good friend. E had been part of the interview team that hired me. He apparently had a heart attack and died yesterday afternoon. Although he'd had some heart issues, this was a shock.

On the good news front, I had my yearly physical this morning (my first in three years). All seems to be good. I could lose 10 or 15 pounds, other than that my cholesterol and blood pressure and hemoglobin and platelet counts and PSA are all in the good range.
Posted by sage at 3:05 PM