A Fortune-Teller Told Me: Earthbound Travels in the Far East (and a catch-up note)

June started out so promising: four blog post in the first two weeks!  But then life got busy.  I am now down near Savannah searching for a place to live as I am moving back (after nearly 3 decades) to the land of heat and humid and sand gnats, but also some of the most beautiful low country marsh you can imagine!  And I'm excited about the new opportunity. 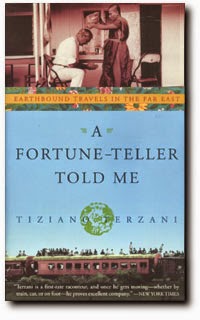 In 1976, a year after the fall of Saigon, Terzari, the late an Italian journalist who lived much of his adult life in Asia, was told by a fortune-teller that he should not fly during the year 1993.  Although he didn't believe in fortune-telling, the specific warning stayed with him and as 1993 began to draw near, he decided to spend the year traveling on the ground.  This book tells of his journeys that year as well as bringing to life the richness and the challenges of Asia as the 20th century drew to a close.  Having travelled along many of the same paths two decades later, I was fascinated with Terzari’s insight, saddened by some of his findings, and amused by his humor.
Terzari experience in Asia as a journalist included being one of the few Westerners to have experienced both the fall of Cambodia and South Vietnam.  His life almost ended at the hands of the Khmer Rouge in Cambodia.  He was being set against a wall in Poipet to be shoot and it was only at the last minute, through his basic knowledge of Chinese, that his life was spared.  In 1993, at the time of elections in Cambodia, he once again visited that wall. (275)  Terzari began his year on the ground in Cambodia reporting on the United Nation's investigation of Khmer war crimes.  Having stopped flying, he was replaced with another correspondent who was in a helicopter crash.  Luckily, no one was killed, but the news of the crash gave Terzari a moment to reflect on the possibility.
I was drawn to Terzari’s idea of traveling on the ground for so long, especially after having travelled overland in Southeast Asia in 2011.  However, at first, I was taken back when Terzari seemed to build his trip around visits to fortune-tellers in Asia.  Every place he visited, he sought out a fortune-teller and began to compare notes and fortunes.  Unlike the West, Terzari says, Asia remained superstitious long after the West.  Communistic governments often tried to stamp out foretelling, even though as Terzari notes, many top officials even consulted foretellers before making major decisions.(85)  He even suggested one of the West's failure in its counter-espionage efforts in Southeastern Asia came from its lack of understanding the role astrology plays in Asian decision-making.(87)  From my own experience, I remember being shocked of Korean Christians consulting shamans for the best date to get married (although such a practice may not be any worse than picking your date based on the availability of the best banquet hall).
Terzari, I should note, outside of not flying in 1993, doesn't put much stock in the advice he receives. "One shouldn't put too much faith in fortune-tellers, at least not where details are concerned," he writes. (331)  He is interested in the different ways the art is practiced which makes his travels informative.
Terzari spent most of 1993 traveling from his home in Bangkok.  He headed down the Malay Peninsula to Singapore, wandered his way around in Miramar/Burma, Cambodia, Vietnam, China.  He then took a train from Asia to Europe to visit his home in Italy and took a freighter back to Asia.  Along the way he gains a renewed appreciation for travel:

Insights into travel; Travel is an art; and one must practice it in a relaxed way, with passion, with love.  I realized that after years of going about in airplanes I had unlearned the art-the only one I care about. (123).

Ironically I read the above quote while on an airplane!  Along the way, he often laments the changes going on in this part of the world.

Tibet, to protect its spirituality, for centuries forbade anyone to cross its borders; that is how it preserved its very special aura.  There it was the Chinese invasion that broke the spell; in the name of moderation, of course.  One of the most disturbing bits of news I have read in recent years is that he Chinese, to facilitate (what else?) tourist access, have decided to "modernize" the lighting of the Potala, the Dalai Lama's palace-temple, and have installed neon lights.  This is no accident: neon kills everything, even the gods.  And as they die, the Tibetan identity gradually dies with them.  (31)

While traveling on a container ship, he laments the lost of ships shapely elegance, and how technology has stolen poetry from a life at sea. (366, 368)
He often employs a dry sarcastic humor.  Reporting on the work of the United Nations in Cambodia, he speaks of the various nations with troops there and their own baggage: "Indonesians responsible for massacres in Timor, Thais who have murdered unarmed protesters in Bangkok, and the police from various African dictators. (262)
Terzani appears concern that the Chinese are dominating much of Asia (it's an age old battle as Chinese have outposts all over the region).  When visiting a Malay fortune-teller, the man told of his past life.  When asking for details, the man said:
That I do not see...  The great majority of my clients are Chinese, and if I started talking about their previous lives I would go bankrupt.  The Chinese do not care about past lives, only this life; they are interested in making money, and what they want to know is how far they can go in cheating their customers and deceiving their friends." (347)

Terzani suggested his fortune-teller friend was "another victim of the prosaic character of the times, and of the diaspora Chinese!" (347) I wondered if Terzani bias had something to do with having once been expelled from China.  Yet, in Malaysia I did see how the local Malay people were fearful of the Chinese as they tended to be the minority with the money and influence.
Another change he finds troubling is how Western Capitalism is changing the culture.

Projecting itself as the only true model of human progress, the West has managed to give a massive inferiority complex to those who are not 'modern' in its image—not even Christianity accomplished this, and now dumping all that is unknown in order to adopt all that is Western...  (64-65)

At another place, he laments finding karaoke (Japanese capitalism is essentially western capitalism) in the middle of a Burmese jungle and I was reminded of my own experiences in a karaoke bar in Mongolia. (366)  Terzani also calls Singapore the "Bethlehem of the great new religion of consumerism." (171)          Although Terzani explores religious beliefs along the way and compares them to the faith of his childhood, he never seems interested in religion even though he does end his question with a boot-camp on mediation that was taught by an ex-CIA American Buddhist. (376)  He seems to have a great appreciation for Buddhism and likes how the faith tradition prohibits bragging about one's progress in mediation. (384)
I enjoyed this book and (although a bit dated and at times Terzani can be a little condescending) recommend it to anyone interested in learning more about Southeast Asia and the role various forms of fortune-telling plays within society there.