Processional on the First Sunday of Lent

In February, as Lent approaches, the Jacaranda trees which are all around Antigua, Guatemala bloom. Their purple petals are royal in color and set the scene for the season. Antigua is known for it's processionals and on each Sunday in Lent, A processional will begin at a church on the edge of town and wind its way toward the site of the old cathedral at the City's Center. I was blessed to be in Antigua for the first such processional for 2018.  In preparation, large colorful designs made of flowers and/or colored sawdust, are placed along the route of the processional.

While the processional is still a ways away, young men with banners began to make their way down the street as the music from the band can be heard long before one sees the musicians.

As the processional approaches, priests swing censers filling the air with incense.  Immediately my head began to react to the smell and I realize why I could never be a Catholic, Orthodox or Buddhist priest (there's other reasons, but my allergies is at the top of the list). 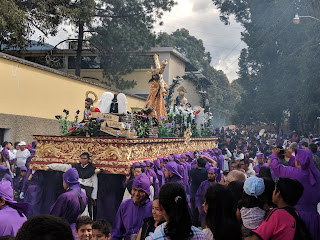 The floats are carried on the shoulders of men who wear purple robes.  Those who carry the float are exchanged each block.  As they slowly move forward, the float seems to rock back and forth. Time seems to appear to slow down as the float waddles down the street carried by local men. 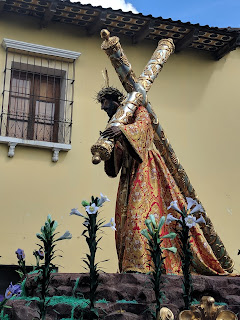 The statue of Jesus carrying the cross provides a visual that goes well with the mournful sounds coming from the band. 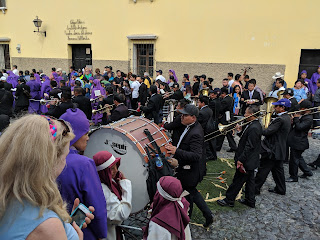 The band follows the Jesus float, providing a mournful tune to encourage those who are a witness to the processional to reflect on their sins and on our human role in crucifying the Savior. 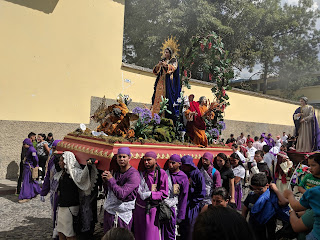 Following Jesus is a float of the blessed mother of the Savior, Mary. 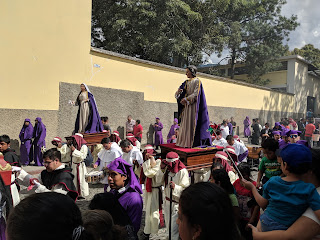 I think these were statues of Mary and Joseph. 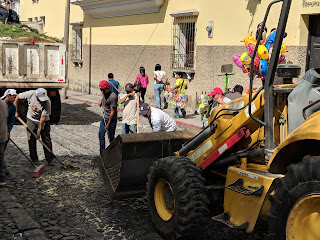 As soon as the processional passed, men were out with shovels and racks to clean up the streets. The vegetation and sawdust was tossed into a front-end loader who would dump the waste into the back of waiting pickup trucks.

It was over in 30 minutes. Even though my head was clogged, it wouldn't have missed this experience.  It was also beautiful and mysterious.
Posted by sage at 3:43 PM 19 comments:

On Tuesday evening, I returned from an eleven day trip to Guatemala.  I went on a mission team and as no good deeds go unpunished, I came back with one heck of a congested head that has sapped my strength.  Over all, it was a good trip.  We started and ended in Antigua, which is a lovely old city.  But we spent four nights in Jalapa, a town in the southeast of the country, from which we ran clinics in two smaller villages.  When we returned to Antigua, the volcano that overlooks the city had become quite active, or at least it was sending up enough smoke to remind folks of its presence.

I loved the climate (we were mostly above 4000 feet).  Nights were cool, days were warm.  I also enjoyed the food--lots of vegetables and fruit, good meats, wonderful spices and sauces, and cold beer!  Maybe I'll write more later (but I still have more to write about my summer trip to Scotland).

I'm staying busy and preparing to head to Guatemala late this week...  So for now, I just have another book review.  I've listened to this book while in the gym during January. 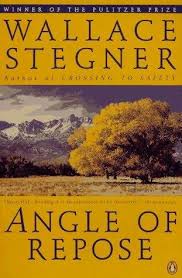 It’s the summer of 1970 in California. Lyman Ward is a divorced and retired professor. He has lost a leg to disease. He spends his days with the aid of a neighbor, going through is grandmother’s letters and using them to recreate his grandparent’s lives in the American West. Oliver, his grandfather, was a mining engineer. He married Susan, an artist and author from New York. After moving West, she continues her work while regularly writing letters to her friend in the East.  With her life tied to a mining engineer, she moves all over the West and even to Mexico. The two are always hopeful, but nothing ever works out.  Oliver creates a process for making cement, but doesn’t patent it and someone else develops it. He is honest about the mines he works which leads to problems in a society where many use fake reports to make a killing selling shares in worthless mines.  He has a vision for a massive water project in Idaho, but loses his backing before it pays off.  He trusts an attorney to file his papers for land and then learns the attorney has claimed the land for himself.  His honesty and the trust he places in others leads to disappointment and after disappointment.  While having a few good years, he never makes it big while Susan’s work (illustrations for books as well as articles on the West) keeps the family afloat.  In time, a gap begins to break between Susan and Oliver. She is lured away by Oliver’s loyal assistant, Frank.  Although she declines Frank’s offer, the rift between Susan and Oliver widens. After the accidental drowning of a child, Frank’s suicide, and more separation, the two live out their lives accepting their less than happy estate.

As Stegner bounces back and forth from the 19th Century to 1970, parallels between Lyman Ward and his Grandparents become apparent. While this is a novel about the West, it is also a novel about families and relationships. However, the West plays a role as the backdrop for the story. It’s a land of promise that often fails to live up to its hype. The Ward’s traveling from place to place in the hopes of hitting it big remind me of Bo and Elsa in Stegner’s first novel, TheBig Rock Candy Mountain which begins around the turn of the twentieth century, a few decades later than Angle of Repose (1870s-1890s). The families of both novels spend their lives jumping around over the West in an attempt to make it big.  But there is a difference in the two men.  Oliver is very honest, where Bo is often operating outside the law.  They both find more trouble than reward in the American West.
Stegner’s prose is masterful as he captures the landscape of the West.  As he did in Big Rock, he often uses the journey across country to describe the differences between the East and West.  There is something about the wide-open spaces that draws his characters back to their home.  Even though Susan resisted becoming a western woman, by the end of the book, she has been lured into the landscape. It may not always be a place where dreams are fulfilled, but it is a place of hope and promise.

The title has to do with an engineering concept about the angle material (such as tailings from a mine) will stabilize and not continue to roll down a slope.  Stegner is able to apply this term to human relationships and it comes up numerous times within the book.

Stegner won the Pulitzer Prize in Fiction for this novel, even though he did have its critics.  For a work of fiction, he does quote letters from a woman whom he modeled Susan Ward afterwards. These letters are extensively quoted throughout the book and provide opportunities for Lyman Ward (the narrator) to speculate about what was going on in the lives of his grandparents.  I enjoyed this book and do recommend it.  Of course, I have spent much time studying mining camps in the West and especially in Nevada, so this book was, as some say, “right up my alley.”  I listened to the book, but had a hard copy which I did some actual reading over interesting sections.
Posted by sage at 9:51 PM 22 comments: