The Savannah Bananas: A Night at the Ball Park 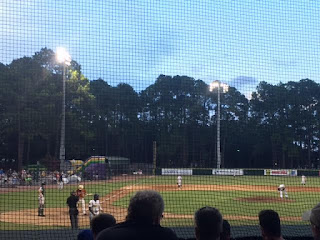 Last year Savannah lost its minor league team when the Sand Gnats moved to Columbia, South Carolina. It's no longer just the major league teams that chase new stadiums and Columbia provided one for the Sand Gnats.  I'd like to know whoever thought it a good idea to call a Single A baseball club the name of one of Savannah's nastiest residents?  In Savannah, the Sand Gnats played in the "historic Grayson Stadium" which has been around for 90 or so years. I know the stadium may not be up to snuff for professional ball players, but I like it.  You're close to the action.  There are large overhead fans that cools the fans below.  There's plenty of shade in the main seating areas.  And the best, the food and beer is cheaper than at a major league game. Watching a game in Grayson is a nice experience.  I was heartbroken to learn that the Sand Gnats were moving, but figured good riddance.  Sadly, they left the sand gnats behind when they packed up their bats and swept out the locker rooms.  Baseball appeared to be a thing of the past in Savannah.

But up steps a young local businessman with the idea of a new team, the Savannah Bananas.  They are not exactly a minor league team. The players are all also college students and play for college teams.  They are a part of the "Coastal Plain League," a name borrowed from an old "Class D" minor league (a notch down from Single A).  The league stretches from Virginia to Georgia and two of my old locales support teams (the Petersburg Generals and the Wilmington Sharks).  The college players who make up these teams are hoping for a chance at the pros, and this gives them a venue to play once the college season is done.  They have a rather short season (mid-June to mid-August and play 24 home games.  This past Thursday night I went with a group from church to see this new team.  The owner is a marketing genius.  Last year, there'd be 1000 people on a good night to watch the Sand Gnats.  This year, they've been selling out with 4000 or more fans.  The food is even cheaper than last year (for a group, you can get a $15 a ticket that includes an all-you-can-eat wristband allowing you to munch out on hot dogs, chicken sandwiches, hamburgers, popcorn, cookies and soft drinks). 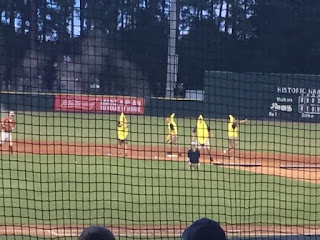 The mascot is the "World's Strongest Banana," also known as the "King of Potassium."  The owner pranced around in a yellow tux, obviously enjoying the crowd.  Crews in banana costumes swept the infield, stopping at second base to dance.  Between one inning, there was a "catch the banana in the pants" stunt, that pitted two fans wearing over-sized pants trying to catch tossed bananas.  I don't think they can brag that no bananas were harmed in that stunt and there may have been other damages.  I hope the contestants were wearing cups.  And there was a little baseball mixed into the night's entertainment.  I was wanting the Asheboro Copperheads to slip on a banana, but sadly they made banana pudding, peeling the local team 6-4.  What's a baseball post without a few cliches!

I am up in North Carolina for a week with limited internet access, so I'll catch back up when I return.  I'm posting this from a coffee shop in Carthage.
Posted by sage at 10:36 AM 26 comments:

Ken: a review of a new play 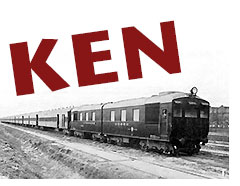 On Sunday, I had an opportunity to see the premier of a new play.  "Ken" was presented by the Savannah Community Theatre and played at the Muse Arts Warehouse, a small playhouse at one end of an old railroad freight depot which was a perfect setting for a play about a train ride across the country.

The play is told through the eyes of Arnold, a drama student at Yale University during the 1930s.  He couldn't afford to go home, so he takes a job working in a hospital.  But as everyone leaves for the summer, he is feeling sorry for himself.  Then an opportunity occurs when a fellow student is found dead.  Arnold had known Ken but wasn't a close friend, but is asked by the school to accompany his body back to Portland Oregon.  Seeing a chance to travel, he agrees.  Along the way, he meets a young woman also traveling back to her family in Seattle after her year in school.  With a ten hour layover in Chicago, they head off to the World's Fair.  They enjoy a wonderful meal in the "air conditioned dining car.  They see the ravages of the depression and the dust bowl.  As they head west, there are travelers heading for vacations at Yellowstone and Glacier who sit across from others who are essentially refugees, fleeing their dried up farms. Arnold falls asleep as the train is split in Eastern Washington.  To his horror, he realizes that the body didn't make the Portland train and he feels horrible.  But all works out as the body is sent down from Seattle.  Arnold finds himself becoming more concerned about the feelings of others and is able to console the family.  He even decides to stay in Portland and work for the summer before heading back to Yale in the fall.

The story is told through two Arnold's.  The younger Arnold, who does the acting, is a college student.  The second Arnold is the narrator and a man twenty-five years older who looks back at what he learned that summer.  Ken is based on a short story of the same name by Arnold Sundgaard, which appeared in the New Yorker Magazine in 1959.  The story was based on the experiences of Sundgaard while he was a student at Yale.  It was produced by Stratton Leopold, a local man who has been very involved in the movies.  Leopold (whose family also owns the famous Leopold Ice Cream parlor in downtown Savannah) was a classmate of Sundgaard's son in the 1960s.  On behalf of the Sundgaard family, he asked another friend (Tom Coleman, III) about turning the story into a play.    A scoop of Leopold Ice Cream was given to each viewer of the play.

The set for the play was minimal.  A few long boxes served as the casket, waiting room seats, and train seats.  There was no curtain and the actors stepped out from behind a dark wall.  Most of the actors played multiple roles. One man would appear dressed as a train conductor, an undertaker or a farmer down on his luck.  A woman might appear as a secretary, mother, or a farmer's wife.   On a screen high above the stage old photos of train stations and sights along the way were shown, which helped set the mood. I enjoyed the play but then again I have a think for trains.  I've taken the Great Northern Route (Empire Builder) from Chicago to Seattle and could easily visualize the sites screen along the way.  The play is still a work in progress, but I came away with the understanding they hope it will be performed again.  If you get a chance, I recommend you check it out.
Posted by sage at 5:26 PM 24 comments:

I’ve taken a couple of long paddles the last two Fridays.  This was on Friday, July 1.  A friend and I left from the marina on Delegal Creek at 9:30 AM.  We had three hours of falling tide.  Aided by the current, we paddled out into Green Island Sound, pass the last navigation marker with its osprey’s nest.  I was surprised that the bird wasn’t there squawking at us as she has done other times this summer, but then as we were about to pass the marker she came back to the nest with what appeared to be a marsh rat in her talons.  Dinner for the little ones! 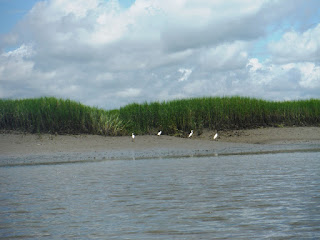 Instead of paddling in the open water, I wanted to try to explore some back passages to Wassaw Island, so we turned up Adam’s Creek and paddled against the falling tide as we made our way deep into Romerly Marsh.   We often saw families of birds along the shoreline and at one place saw several bottle-nosed dolphins running mullet up on the banks.  As the small fish flopped back into the water, the dolphins snacked on them.  But as we tried to get close enough to capture a good shot, the dolphins took off.  It was in chasing the dolphins that we made a wrong turn and paddled up a creek that played out.  We turned around and found Adam’s Creek again and continued paddling up it, between Skidaway and Little Wassaw Island until it turned into the Olingsell River.  By the way, I am not sure what qualifies as a river or a creek out here as they didn’t appear to be that different in size.

Reaching the river was a milestone as it flowed out into the Ossabaw Sound on the west side of Wassaw Island.  Passing Flora Hammock, we continued to paddle in the heat, knowing that soon the tide would turn and we’d be paddling against it.  Sure enough, the tide did turn and the last mile or so against the current.

We stopped at a neat but muddy beach on Wassaw Island, at the confluence with Wassaw Creek, about a half mile from the point.  It was shady and there were dead trees (reclaimed by the tides) that made good benches to sit and enjoy lunch.   It was nice to be in the shade as the temperature was approaching triple digits and the heat index well over a 100.
After eating and resting, we decided to get moving as it appeared there would be an afternoon storm.   Instead of paddling the creeks, we paddled out through the Ossawbaw and Green Island Sound, passing the shoals just south of Pine Island.  We watched a storm come in from the southeast, with lightning on the other side of the sound.

About the time we arrived back into Delegal Creek, to the squawking of the osprey, we were soaked with a cooling rain.  It felt good and with the lightning staying south of us, we were okay (although not particularly safe, but there was nothing to do but keep paddling).  We got back to the marina, tied our boats up on our vehicles and then, while downing a beer, enjoyed a second storm with its cooling wind from the safety of a porch along the dock.  We had paddle a little less than 16 miles with about 6 or so against the tide.

What have you been doing for fun recently?