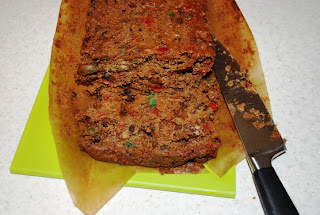 On Christmas Eve, I carefully unwrapped the moist brown paper covering one of two loaves of fruitcake and cut a few slices.  Fruitcake is like that; it’s rich, you only want a slice at the time.  This is my first ever fruitcake and it had spent the previous two weeks soaking up bourbon.  Since then, the first loaf is gone and I’m into the second one.  I shouldn’t say I am into it, because I’ve limited myself to a slice a day and most of the first loaf was enjoyed by others.  I’m trying my best to redeem fruitcake’s status from primarily serving as the blunt of jokes.

The cake is good, but when I do it again, I’m going to dramatically increase the amount of nuts.  Here is my recipe:


Mix in a big bowl:  ½ cup of red cherries (cut in half), ½ cup of green cherries (cut in half) Cup of diced pineapple, 2 cups of Old English fruit and peel mix, cup of chopped pecans, cup of currants, cup of raisins, cut of chopped dates, juice and pulp from 8 citrons, 2 teaspoons of grated orange peel.  Add ½ cup of thawing orange juice frozen concentrate, and ½ cup of bourbon (I used Jim Beam).  Let it sit for a few hours to soak up the bourbon.

Butter the bottom and sides of two standard bread pans, then line with paper and butter the paper.


Shift together: 3 ½ cups of flour, 2 teaspoons cinnamon, 2 teaspoons nutmeg, ¼ teaspoon cloves, ½ teaspoon of all spice, then mix in teaspoon baking powder and a dash of salt. Set aside.

This step is best done with a stand mixer: Put 1 ½ cups of butter (room temperature) in a large mixing bowl and cream, gradually adding 2 cups of brown sugar. Then add the egg yokes and gradually add flour mixture until all is mixed in with the butter and sugar.  Then add ½ cup of molasses.  Next, stir in the fruit mixture.   Set aside.

Beat the egg whites till they form stiff peaks.  Fold egg whites into the dough and mix thoroughly, then spoon into two bread pans.  Cover with cloth and let it sit over night.

Heat oven to 250 degrees.  Bake bread for an hour, then cover the pans with paper and bake another 3.5 hours (toothpick should come out clean).  Let bread cool in pans, and then remove.  Wrap bread with paper that’s been soaked in bourbon.  Place bread in closed but not sealed container (I used a large plastic cake container) and add bourbon to the paper every few days.  Let is age for 2 weeks, then enjoy.

Have you ever had good fruitcake?  If not, you don't know what you're missing but I'd still like to hear your favorite fruitcake joke?

Sometime during the Midnight Mass at St. Mary’s of the Mountain, the zephyr pounding Virginia City blew itself out.  A small group of us who’d spent the evening together stepped out into the cold.  It was now Christmas morning.  We were decked out in boots, heavy coats, scarves, gloves and hats.  The snow squeaked under our feet and the air calm.  We wasted no time and immediately began to walk in an attempt to stay warm.  Overhead, Orion tilted a little toward Mt. Bullion and the rest of my favorite winter constellations were flickering brightly: Orion’s faithful dog, the twins, the bull, the charioteer, the seven sisters.  Only a few clouds, sheer-like, remained from the storm.  We made our way up Taylor Street, toward the lighted “V” high on Mt. Davidson.  A month earlier, before the first big snow, I’d spent Saturday afternoon with Karl and Dave.  Together, we hauled loads of wire and strings of lights up the mountain and ran the lights around the whitewashed V that had been painted on rocks in a section where the sagebrush had been clipped.  The painted rocks were now buried under the snow, but the lights stood out brightly and served as a beacon as we headed uphill.

The town was quiet as everyone had settled in for a long winter night.  There were a few frosted windows with warm inviting lights, most windows were dark.  The air smelled of burning pinion from wood stoves which provided heat for many homes on the Comstock, and the smoke rose into the sky as an offering to the stars.  We passed the school and D Street, and climbed another block to C Street.  This was the busy street in town, but now all was quiet.  The Ponderosa, the saloon on the southwest side of C Street, and the Mark Twain to the north, were both closed for the night.  Perhaps another bar was open—the Union Brewery, the Silver Queen, the Bucket of Blood, Julia Bulette—there were plenty of bars and generally at least a couple were open.  But we were tired and ready for bed.  We wished one another Merry Christmas in the cold, our breath puffing smoke like a steam engine, and said our goodbyes.  A couple headed south on C Street, toward the Divide, others to their homes to the north.  Victor, Jeannie and I continued on climbing.  At B Street, we split up as Jeannie made her way up to her house on A Street, Victor to his apartment and me to my small home.

But before going inside, I stopped for a moment to look around. To the north, above the courthouse, were the northern constellations: the big and little dipper and the dragon whose tail seems to wind around that part of the sky.  I then looked back to the east, down Taylor Street into Six Mile Canyon.  All seems quiet and tranquil as smoke rose from chimneys of homes.  I was happy and content even though this was my Christmas without any family.  I went inside and instead of turning up the heat, pulled out another blanket for my bed and crawled in and was soon asleep.
Posted by sage at 2:19 PM 16 comments:

Ramblings on the Eve of the Apocalypse

As you can all see, I haven’t been blogging much lately.  Life has been busy and I’ve been preoccupied with other things.  I even missed by 8th blog anniversary earlier this month.  But life is good and since I don’t expect the world is going to end tomorrow, I thought I’d stop by blogland long enough to let everyone know I’ve not experienced an early Mayan apocalypse.

I thought several times about addressing what happened at Sandy Hook Elementary School in Newtown, Connecticut.  When I first heard the news last Friday afternoon, I was even more shocked to realize that while it was happening, I was at our local pool, volunteering to teach swimming to elementary kids.  What a tragedy, but everyone else has been talking about it where there isn’t a lot that can be said.  I suppose that, in a way, talking about it is the only thing those far away can do to show they stand beside those grieving.  But sometimes the news media seems so invasive of privacy that I get sick of watching it.  And also, I wonder what’s happening in the rest of the world.  Midweek, I finally switched over the BBC to check and see if North Korea armed any of their rockets or if the Syrian nerve gas was leaking in our direction.  We live in a crazy world.  Christmas is supposed to be the celebration of the birth of the Prince of Peace, a birth that was marred by Herod’s killings of the innocent.  The world remains in a fallen estate and we hope and pray.

Maybe I should talk about the weather.  Interestingly, the grass this morning was greener than it was in July!  Tonight, we may get some snow but that’s what they also said last night and all we got was rain—lots of rain.  It doesn’t yet feel like Christmas, but on the other side of the big lake they’re getting plenty of snow.  Maybe the ground will be white by the 25th.

If I don’t get back to you beforehand, have yourselves a Merry Christmas.  At some point, I will post (with photos) my new Christmas tradition—fruitcake. I had to scourer over three counties to find all the ingredients and about burn up a mixer, but the cake is baked and currently aging (wrapped in paper that’s soaked in bourbon every couple of days).   As I’ve been saying, it’s either going to be very good or a waste of good corn squeezing.
Posted by sage at 11:11 PM 13 comments: