Where's Sage?  He's underwater!  What's he doing there?
A few weeks ago, when I paddled the stretch of the Thornapple that ends at Thornapple Lake, I decided the water had warmed enough for me to attempt to roll my kayak.  I took my shirt off and handed my camera to my friend, Jerry, and found a place where there were no weeds and over I went.  I was like riding a bike as my paddle moved into position (an upside down high brace) as I pushed my knees into the deck of the boat and swung my hips and the boat popped back up.  Just to make sure it wasn't a fluke, I did it another few times.  It was just like riding a bike!

When I was in college, I used to paddle a lot of white water in kayaks and rolling was a necessity.  Glad I can still do it as it is also a good way too cool off on a hot day.

A Tribute (or memories of an Ex)

A few weeks ago, I learned through Facebook that Debbie lost her battle with cancer.  I started to collect some memories of my time with her and finally got around to finishing them… Hey, this month isn't half over and I've already published more than any other month this year!

Debbie was beautiful.  She turned heads with her broad smile, big eyes and hardy laugh. She wore flowing dresses with heels that clicked and gave shape to her calves.  And she was the Dean’s secretary.  I was in my first year of graduate school and I never thought she would have been interested in me, but a month before school ended for the summer, she invited me to Sunday evening’s dinner.  Wanting to make a good impression, I brought along a bottle of Pouilly-Fuisse.   I learned she seldom drank, but she did seem impressed and suggested we open the bottle and celebrate. Then there was the problem of a corkscrew.  She didn't have one in her apartment and suggested she might borrow one for a neighbor but I told her I thought I had a solution and ran out to my car.  Ever the Boy Scout, I had a Swiss-army knife that had a corkscrew attachment in my glove compartment.

On Easter Sunday, I was invited to dinner with her family on Pittsburgh's Southside.  When we arrived into her parents’ home, her brothers were watching a documentary on a race car driver. Elliott Forbes-Robinson.  Although I had never been a big fan of racing, I actually knew him.  When I was working for the Boy Scouts, he was an assistant Scoutmaster on a troop on Lake Norman.  I recalled the story of meeting him, at a scout camp.  When he told me he was a race car driver, I asked if he raced at Hickory speedway.  Hickory was a step up from the dirt tracks of the South, but most of the drivers were still amateurs.  “No,” he said, “I have not raced there.”  “Where do you race?” I asked.  He started listing off an impressive list of cities with Cam-Am and such races and I stood there thinking, "Yeah, right, and I'm Daniel Boone."  I later learned that he really was a race car driver, although at the time he didn't drive NASCAR, he did drive those fancy cars and was one of the top drivers in the world.  He had a boy in scouts and as he wasn't racing at that week, had camped out with the troop.  Telling the story, Debbie's brothers learned that I really wasn't a racing fan, but they were impressed that I had personally met one of the greats.

Over the next few weeks, we began having lunch together in the dining hall and went out every weekend.  I suggested a Saturday afternoon baseball game and she was up for it.  When I arrived to pick her up, she handed me two tickets!  I didn't know what to say, but as a poor student was thankful.  Then I looked at the seats and was humbled.  Her brother worked for one of the high-end hotels in Pittsburgh and they had tickets that no one had claimed so he gave them to Debbie for us to enjoy.  We sat directly behind home plate, five rows up.  It'd never had such good seats for a major league game, nor have I had such good seats since.  You have to love a girl whose brother arranges to cover the expenses of the date.

Later that evening, Debbie and I walked up a hill and held hands as we watched the sun set.  I felt as if I was the luckiest man in the world.

Debbie was close to her family and on another weekend, she and her brothers had given their mother a evening ride in a balloon across Southwestern Pennsylvania.  When the mother got in the basket with a few other sightseers and a pilot, we raced along the countryside following the balloon until they finally set down in a cow pasture and we retrieved her mother.  This would be a lot easier today, with cell phones, but this was 1987.

The day I left school at the end of the semester, we had breakfast together at a local King's Restaurant.  I wanted to do something special and had purchased some of her favorite perfume, hoping that as she used it she would remember me during the summer.  She seemed pleased and we even talked about her meeting up with me in Delaware Water Gap as I hiked the Appalachian Trail.  Although we were not in a committed relationship, we talked about picking up where we were at in September.  After breakfast, I drove to my parents in North Carolina and a week later, I started my summer hike from Virginia to Maine.  At first, she wrote and seemed excited when I called, but as I continued to hike, I heard less and less from her.  I knew something was up.  Even though I had started hiking with the thoughts of coming back to her arms, I realized this was not going to be the case.  When I arrived back at school, I was on cloud nine, having just finished my summer hike, essentially completing the Appalachian Trail completed (I still had a 25 mile section to do).  That first day everyone seemed concerned about how I was going to take being dropped, but I had given up on her mid-way through the summer.  I learned she had connected with someone at a summer wedding (they may had known each other before) and was engaged.  One of the kindness things that happened was the Dean inviting me out to lunch.  He, too, was concerned with how I was handling things, but we mostly talked about my hike as my head was still in the mountains. After a summer of hiking, our short romance seemed light-years away.

A few years ago, Debbie sent me a message and a friendship request via Facebook.   A quarter century had passed as she left her position as the Dean’s secretary shortly after I'd returned from hiking the trail.  We chatted a few times and I learned her marriage had been horrible and she had spent most of her life on her own, but that she was blessed with a couple of boys who are now adults.  She apologized for having treated me horribly.  I thanked her for the apology, but told her my life had continued on and was going well.  Then she told me about the breast cancer.  Over the years since that chat, I would occasionally learn through Facebook about how each new treatment was less effective.  But she was strong in her faith and always maintained a positive outlook, but at times she'd ask for prayers and I would pray.  In early May, the disease finally took her and I found myself shedding tears.  She was a beautiful woman who was so proud of her boys (her sons and her brothers).  I felt a small piece of their pain.
Posted by sage at 9:22 PM 17 comments:

I am sure that some of you remember Diesel who used to blog at Mattress Police.  It was one of the more humorous blogs around.  A number of years ago, Diesel (whose real name is Rob Kroese) shifted his focus from writing blogs to books.  I reviewed his first book, Mercury Falls, Mercury is an even more unlikely angel than Clarence in It’s a Wonderful Life.  He’s been sent to earth to bring about Armageddon, but decides he likes life here too much that he stalls for time.  Rob has done well as an author.  His first book was self-published and has sold over 60,000 copies!  Since then, Rob has published a number of other books, having been picked up by 47 North , the science fiction publishing arm of Amazon.   He has also moved from California to Grand Rapids.  On Friday evening, there was a grand kickoff for his newest book, Starship Grifters (a sci-fi comedy).  As the ballroom at the Amway Grand was already booked (this being wedding season, after all), Rob held the shindig at the condo’s clubhouse and enlisted his mother to prepare the snacks (wonderful meatballs).  There was also a good beer selection which naturally drew me up to the big city for the gathering.   Congratulations, Rob.  Keep us laughing!

By the way, Rob reportedly sold the domain for Mattress Police to an inspection service within the mattress industry…
Posted by sage at 7:04 AM 8 comments:

Spring Scenes Along the Thornapple

I've taken six trips along the Thornapple River in my new (used) kayak during April and May and decided to post a number of photos.  Here, you can watch as the trees slowly over themselves with leaves and see some of the animals I saw (those I was able to capture through the lens of a camera).  Enjoy. 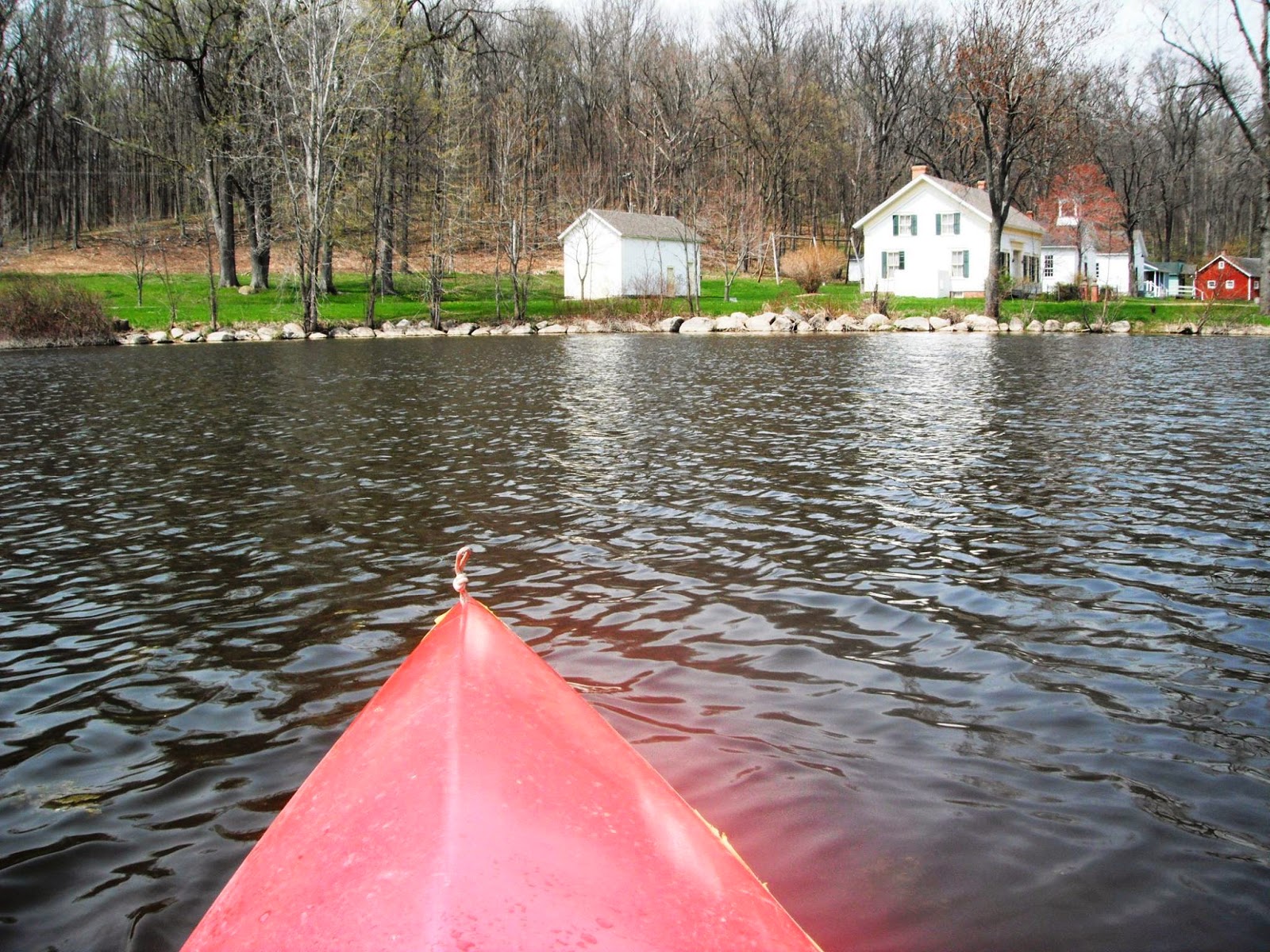 Charlton Park is at the west end of Thornapple Lake.  The created "village" serves as a museum of the way things use to be. 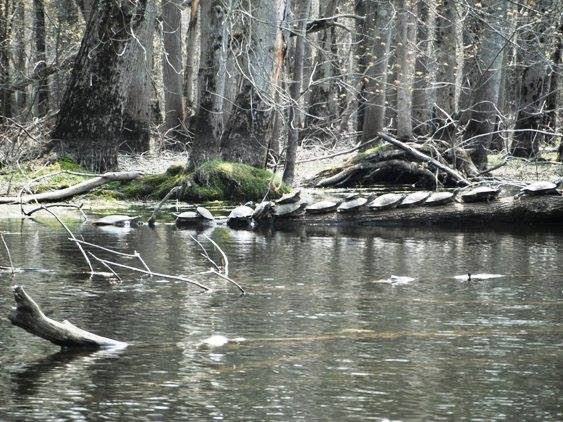 In early April, there were tons of turtles out sunning themselves.  Now you don't see quite as many. 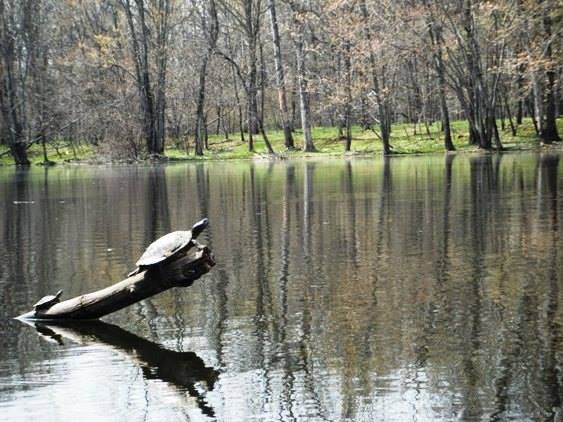 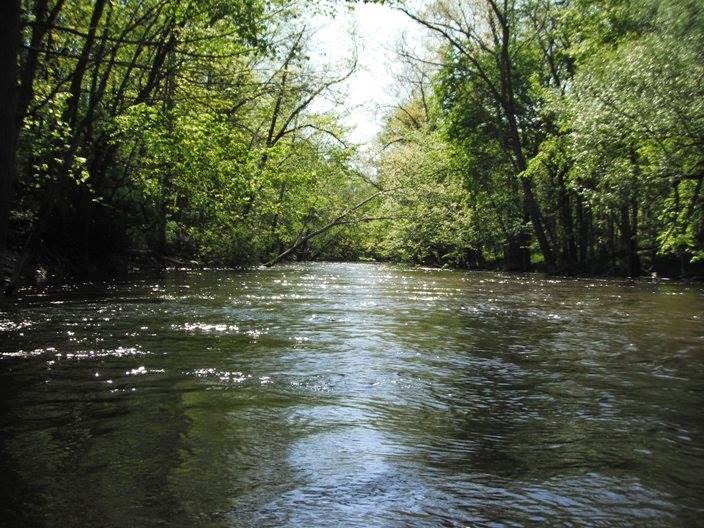 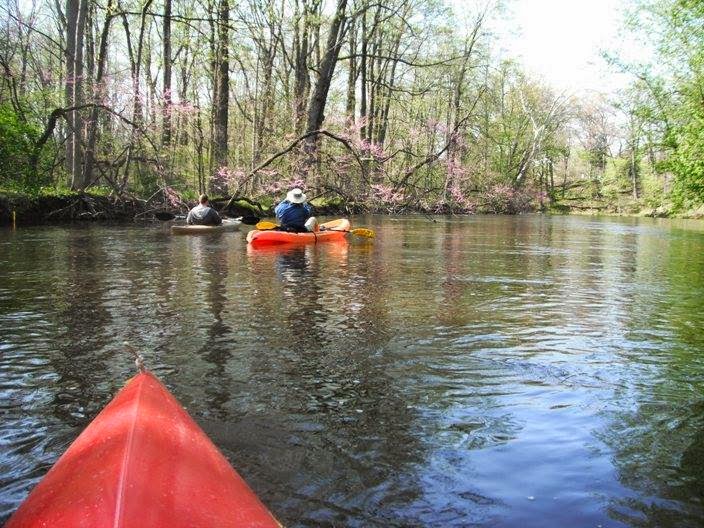 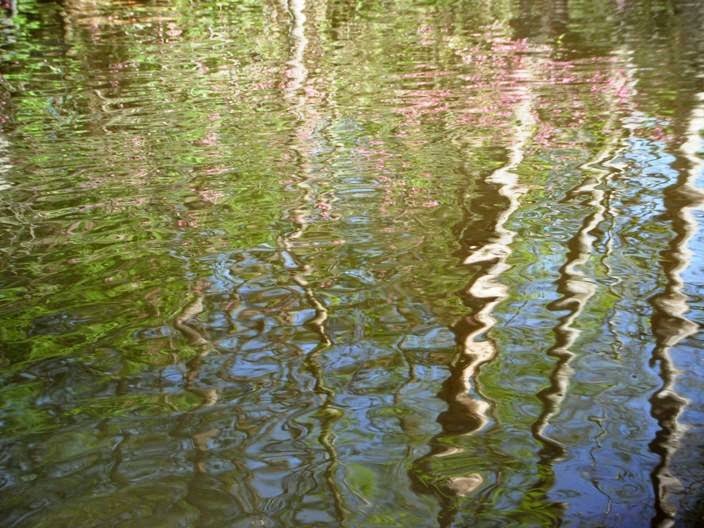 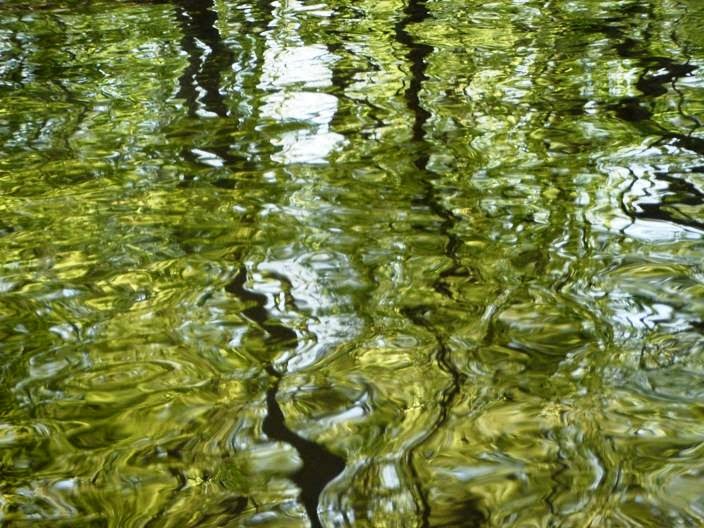 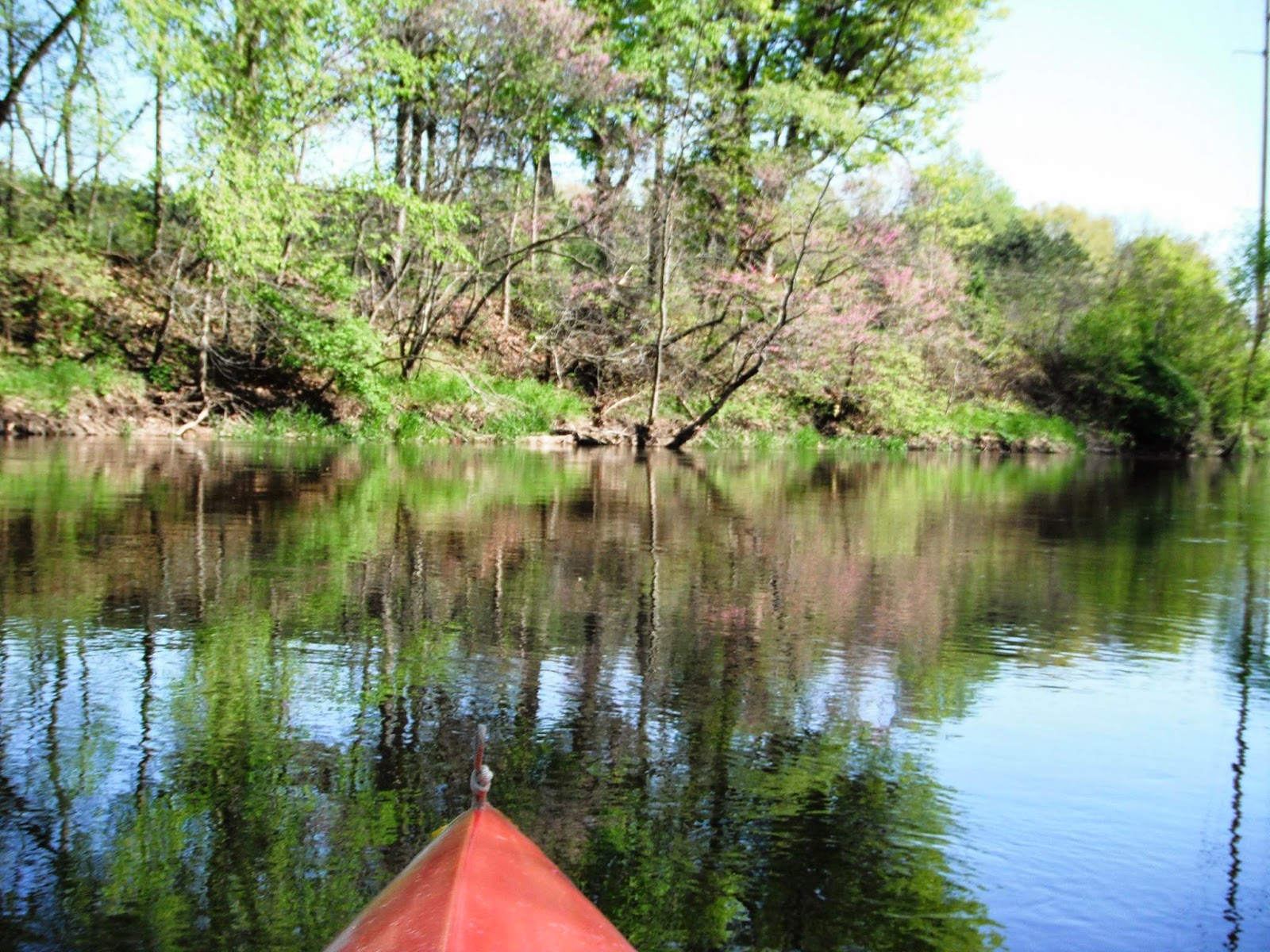 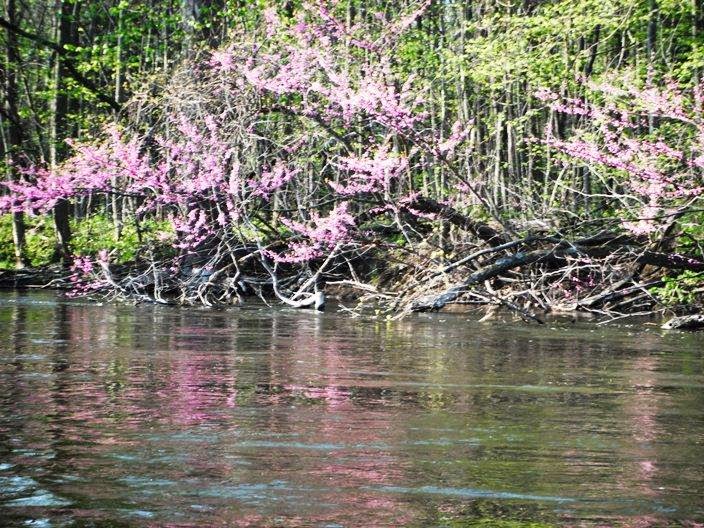 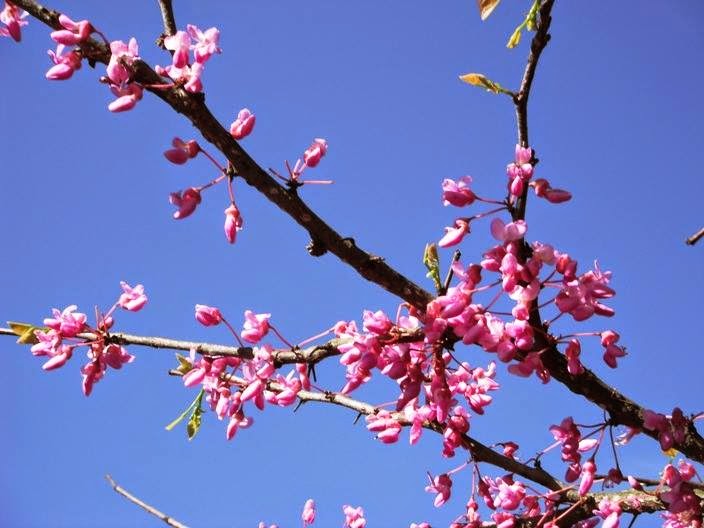 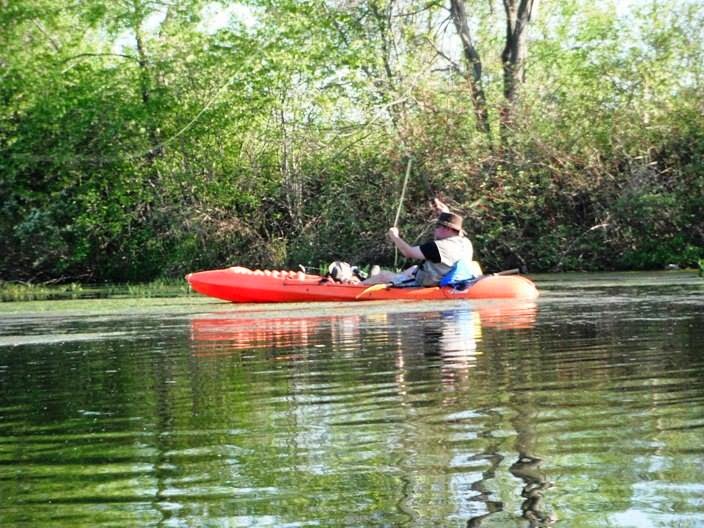 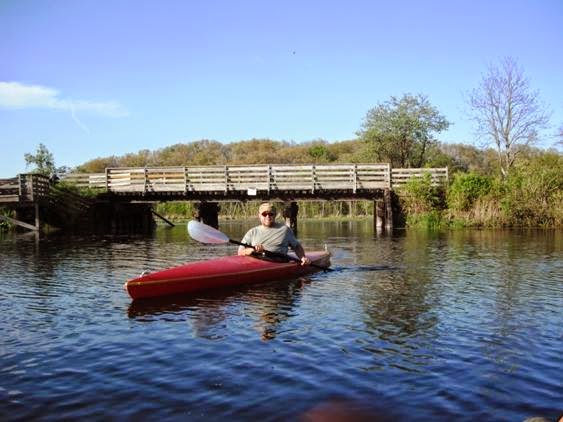 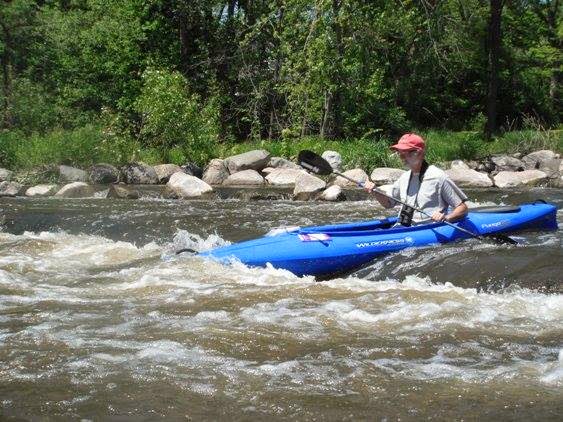 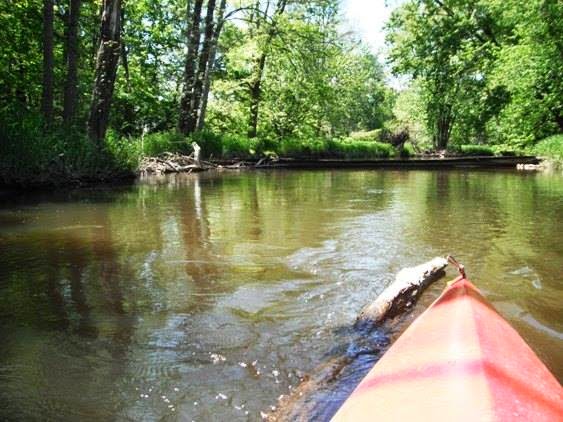 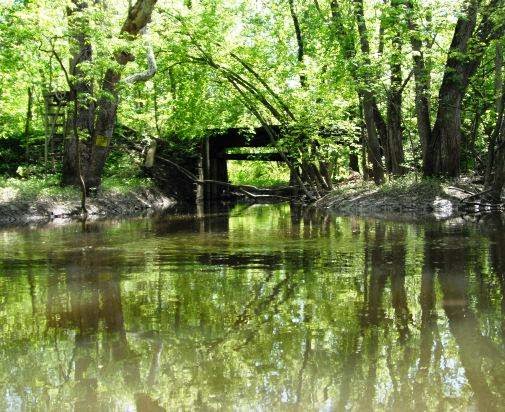 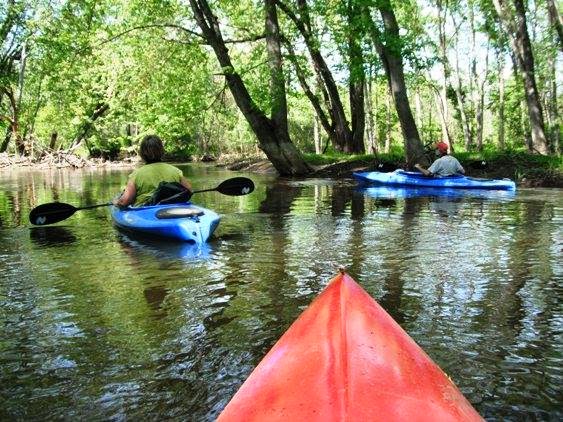