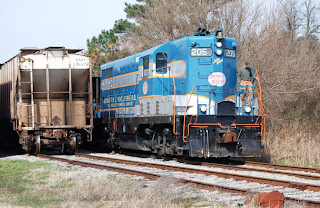 Shuffling cars on the Aberdeen & Rockfish, at the Dundarrach sidings. Photo taken in February 2007.

Easter was gray and cool. We didn’t get as much snow as they’d predicted, but there were on and off snow showers. After church and dinner, I spent most of the rest of the day napping and reading in front of the fireplace. There was no reason to go outside.
----

Among the many books I’m currently reading is Stanley Karnow’s, Vietnam: A History. I’ve been listening to it on my i-pod at the gym. The book is 36 hours long (I’m getting my money’s worth from this download) and there are parts I am listening to twice. I also picked up a copy from the library and have been reading sections of the book. I was stunned by this comment made by Lyndon Johnson in February 1953, when he was a Senator from Texas.

“I want to make absolutely sure that the Communist don’t play one branch of the government against the other, or one party against the other… The danger is they’ll think we’re fat and fifty and fighting among ourselves about free enterprise and socialism and all that. We might mislead them so they’ll think these Americans are just the country club crowd. That’s a mistake our enemies have made before. If you’re in an airplane, and you’re flying somewhere, you don’t run up to the cockpit and attack the pilot. Mr. Eisenhower is the only president we got.”

Eleven years later, Johnson would be the President and claiming such authority for himself. Partly because he didn’t want to look weak when compared to Goldwater, Johnson would be blinded into seeing no other course but to lead America into a war “in that damn little pissant country” (LBJ’s words, said I’m sure with a Texas drawl). The war became a disaster. And now we have another President from Texas who just want’s us to “trust him.” The founders of our nation were on to something when they created the three branches of government to check each other. We need to remember that the president isn’t a pilot, and whenever he’s given such power, America as a nation is in danger. Another lesson we should learn is to never underestimate our opponents.
------

Gautami has posted a poem from the perspective of a confused girl in an incestuous relationship. It’s haunting and powerful and a reminder that there’s nothing worse that someone with authority and in a position of trust abusing a child.
Posted by sage at 11:24 AM