Lizzie Bright and the Buckminster Boy: A Book Review 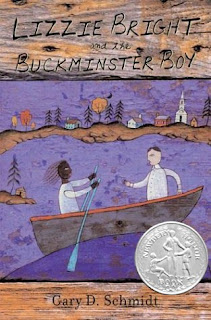 
It’s 1911. The Buckminster family moves to Phippsburg, Maine where Turner’s father has been called as the pastor for the Congregational Church. But Turner isn’t happy about the move. They don’t play baseball in Maine like they do in Boston. He has a hard time making friends and quickly gets into fights with the local boys while upsetting many of the townsfolk. His father, a strict disciplinarian, requires Turner to make amends by visiting the elderly Mrs. Cobb. He spends afternoons reading and playing the organ for her. Although Turner doesn’t make many friends in town, he befriends Lizzie Bright, a young Afro-American girl who lives on Malaga Island. As their friendship grows, Turner begins to learn some terrible truths about his town.

Lizzie Bright and the Buckminster Boy is written for 6th to 9th grade students. The novel is set against the backdrop of an actual racial cleansing, the forceful removal of black citizens from Malaga Island. The reason for their removal is economic, the town wants to develop the island and they don’t want to support the island residents on their welfare rolls. Some of the residents move voluntarily, but those who remained were moved to a state mental institution. According to documents from the time, one of those who were forcefully removed was a young girl. Although her identity isn’t known, Schmidt gives her a name and creates her an identity in the character of Lizzie Bright while telling the Malaga Island story through the eyes of a boy.

At first Turner’s father seems to sides with the interest of the town. Everyone is worried that the shipyard is going to close and if so the town will fail. They want to develop a tourist industry. But Turner father’s changes his position and challenges the removals as illegal and immoral and against the principles of the gospel. For this, he’s attacked by the town’s leading citizens. The attacks are not just verbal and he dies from a fall he takes when wrestling with a man as the island is being attacked. The surprise in the book is that Mrs. Cobb dies and bequeaths her home to Turner. Turner wants to allow Lizzie to live there, thinking that’s what Mrs. Cobb wanted, but in the end he and his mother move into the house. Lizzie dies in the insane asylum.

Schmidt does a wonderful job in showing Turner’s growing love for life by the ocean. In Lizzie’s dory, he see’s a whale up close. It’s a life changing experience.

I found that the adult characters in the book to be too predictably. Their language is filled with clichés. However, in my life, I have heard some of the same “economic logic” be used by people trying to legitimize their own racial feelings. Also, there are some characters in the book that don’t seem fully developed. One is Mrs. Hurd, an old woman who is sent by her son to the insane asylum. Another is Jonah, Lizzie’s father, who is mentioned throughout the book as if something happened to him, getting me curious, but you never learned what did happen to him and why was he named Jonah (did I miss it, was there a clue in the whales?) However, I find this to be a good book. It opens our eyes to the problems created by prejudices and I plan to reread it with my 3rd grade daughter.
Posted by sage at 7:28 AM