A Private History of Awe (and a photo)

I'm spending a couple of days up north, on Lime Lake, with a friend talking philosophy and theology while we fish and I help with some stuff around his cabin.  I have read a number of books recently that I would like to review...  this is one of them.

This is a beautiful book.   Sander’s writing is graceful and eloquent, even though I did not always find myself in agreement with his theology.  It is evident that Sanders has left his childhood faith behind.  Yet, and it may seem strange for me to suggest this from a man who questions the deity of Christ, his writings appear to me to be incarnational.  Sanders experiences the Creator’s hand throughout the world and especially in other people.  In this memoir, Sanders weaves together the story of his first twenty-five years (up to the birth of his daughter) with the present (experiencing the world through his granddaughter and the decline of his own mother).

Although born in the rural South, Sanders’ family moved north when he was just a boy.  His father took a position at the Arsenal, a huge military compound in Ohio where they build bombs for the Korean and Vietnam Wars.  Later, the family moved outside the Arsenal, to a home with land along a creek (that would later be dammed for reservoir, requiring the family to move again).  Here, Sanders began to love nature.  Sanders’ father often drank and could be abusive, especially to his mother.  As a young boy, Sanders hated his father for how he treated his mother, but in later years he seems to have made some peace and realized there were good characteristics to his father.  For one, his father challenged racial assumptions that were common in America during the 1950s and early 60s.  The contractor he worked for also saw this and when Sanders was older, they sent his father to Louisiana to help foster peace between African-American and white workers.  Sanders himself grew up admiring Martin Luther King, and he relates much of what was happening in his life to national and international events including the Civil Rights movement, the Cold War and Vietnam.

As a high school student, Sanders attended a camp for students who showed promise within the sciences where he met a girl named Ruth, from Indiana.  The two of them struck up a close friendship that lasted through their senior year in high school and through their college years.  (Ruth stayed back in Indiana for school while Sanders headed to Brown University in Providence, Rhode Island).  While in college, Brown changed majors, leaving science behind for English.  After college, Sanders had a scholarship to study in Great Britain while Ruth had a scholarship for graduate study at Harvard, but they ended up marrying and both going to Britain where Sanders earned a PhD, focusing his dissertation on the writings of D. H. Lawrence.   Coming back to America, the couple decided to settle in Indiana, with Sanders teaching at the University.  This decision went against the suggestions of many of their friends who questioned such wisdom of attempting to become an established author in the Midwest.   However, the decision reflected the role of place and the importance of family in the Sanders’ lives.

This book contains many wonderful stories.  We learn about how Sanders first encountered and later dealt with racial issues, with the Vietnam War and the possibility of being drafted, with the two-sides of his father, with his place in the created world and awe for nature and a desire to do no harm.  Grace is seen throughout these pages.  Sanders may have moved away from the childhood faith of his parents, but he retains the awe and is disturbed that awe is often missing from churches today.

There were two places where Sanders got me questioning his understanding of nature or remembrance of an event.  Both are minor mistakes, but I will note them.  He speaks of the seed heads of poisonous sumac turning brilliantly red in the fall (92), but that plant doesn’t have a seed head and its berries don’t turn red don’t turn red but a grayish white.   I think he is referring to staghorn sumac.   On another occasion, he tells about going to a room at the university (in Great Britain) to watch the first man on the moon.  As they walked to the building, the clouds parted long enough for him to see the waxing crescent of the moon…  Early that next morning, as he’s walking back from having spent most of the night watching the moon footage, he also sees the crescent moon setting.   If it was truly a crescent (new moon), it would have long set when he headed home.  As a said, both of these are minor and really don’t distract from the power of Sander’s prose.

Last Sail (of the season)

Things have been rather crazy in my sageless domain recently.  Michigan seems to be void of sage except in gardens.  I haven't even finished writing about my trip to sageland (Nevada and Utah) back in July.  But the leaves are beginning to change color and the temperature is dropping.  Yesterday,  I had the last sail of the year with two friends who helped me take down the mast.  The boat is out of the water now.  Before storage, I have some work to do on it--cleaning the hull and repairing a seat that busted.  It was a good summer with lots of days on the water with all kinds of wind. 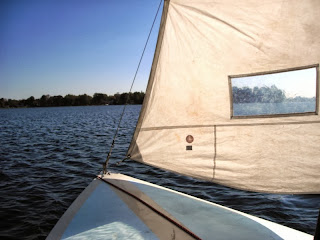 These are some musings from a Labor Day drive I took with my daughter who now has her learner's permit and needs to log 50 hours of driving before she turns 16 so she can get her driver's license.   I realize I didn't do a Queen Anne's lace poem this year, as I have often done in the past, and the long-legged lacy flowers are all but gone for the season.
###

Replaced by golden rods with their yellow tassels waving in the wind, Queen Anne has rolled the last of her lace into tight balls as if to be stored in the bottom drawer of a dresser.  The top leaves of the beans are also turning yellow and the corn is drying as the farmers make their final cut of hay

“Take a right,” I say, and my daughter flips the blinkers on and slows down to almost a stall before she navigates the turn and picks up speed.

“Pretty good, but you don’t have to slow down so much.”

The road runs along the river for a bit and at the town of Irving, which is just a cluster of houses void of any commercial interest, we cross the Thornapple at the dam and head northwest, winding around countryside on a Labor Day morning.  She needs hours behind the wheel and I need to look at the countryside, so I direct her around the back way to Freeport, a town a little more prosperous than Irving that sits just north of the Coldwater, a pristine trout stream, or so I’m told as I can’t seem to make time to fish it even though it’s only a dozen miles away.  Then we make our way back toward Hastings and take State Road out to Vermontville, a community that host the annual Maple Syrup festival in early spring and, in keeping with towns in the state from which it was named, sports a whitewashed wooden Congregational Church at the center.   Between Vermontville and Nashville, we cross the Thornapple again, but here it’s just a small stream and only canoeable at high water.

The leaves of sumac in the swamps have turned bright red, and I wonder if it is a warning of what’s ahead.  Even a few of the maples have a splash of color, a good month early.  And the apple trees seemed to be overly blessed as they droop with fruit.  Things are changing; it’ll be an early fall.  Does such a blessing indicate a hard winter?

“Watch for buggies,” I tell her as we pass a yellow warning sign.

"I know, Dad.” Her voice is sweet but I’m sure there is an eye roll behind her sunglasses.  But this is Amish Country and one has to be alert to slow moving buggies.

“Take a left,” I tell her as we approach Nashville.  She signals and slows to a stop at the sign, before turning onto Main Street.   “How’s that?” She asks as we pass the café and the bar, the hardware and the grocery store, the playhouse and the old Michigan Central station before turning left for home.  “Pretty good,” I say.

For a while the road follows the Old Michigan Central Grade.  Next year it’ll be thirty years since they removed the track.  On the left a few miles out of Nashville is the Octagon barn, a novelty in these parts.   At places beside the highway are strands of dead ash, waiting for a good winter wind to send them back to an earthly grave that they’ll share with the chestnuts.  We take a left on 37 and drive through town.  It’s time for lunch.

“How did I do,” she asks as she navigates the driveway around the house. 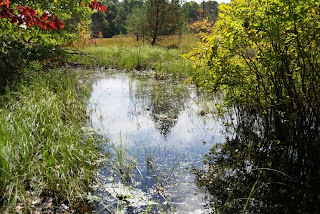