I had hoped to go out into the marsh in my kayak on his super high tide night and watch the harvest moon rise and then duck behind the earth’s shadow, but we’re under cloud covers and you can’t see the moon at all (that seems to always happen around here on full moons, or at least those I plan to be out on the water for).  But last night I did get out for a walk and the high water nearly cover the spartina (the marsh grass).  The wind was up and clouds were blowing by so fast that at times it was hidden and other times it was bright despite wisp of clouds.  The Spanish moss was blowing and in all it seemed to be a Halloween-like night.  I took a few photos with my iphone (without a tripod) and they seemed to come out okay.

The sailing yesterday was great (and our boat took first place!).

Librivox and Sailing Alone Around the World


For years I have used Audible.com as a source for audio books that I listen to in the gym and while on long drives. My snobbishness makes me insist I only listen to unabridged books and I probably listen to eight or ten books a year on audible.  I read a lot more but listening to books make the workouts and the long drives go faster and I learn new things.  That said, this summer I learned of a new service, a free service, for books that are in the public domain.  Librivox uses volunteers to read books and as they are in the public domain (ie, published before the 1920s) there are no royalties to pay.   The first book I listened to was Mark Twain’s Roughing It, which I had read twice before and read parts of it many times.  Listening to it again allowed me to get it into my head since I was teaching a class on it this summer.  I was impressed with the quality of the reading and looked around for other “old books” that I’d interested in reading and that’s where I saw Joshua Slocum’s Sailing Alone Around the World.  As you may remember, I have read other books about those who have sailed around the world (the Dove, the Faith, and the Unsinkable).  I knew of this book, but have never read it.  I was in for a treat.


Joshua Slocum was a semi-retired sea captain when he “rebuild” and old sloop that was used for bringing oysters to market.  He pretty much had to redo all the wood on the boat, working on it in a pasture in Fairhaven Massachusetts.   When completed, the boat which he named "The Spray" was 36’ 9”.  On April 24, 1895, he left Boston to sail around the world.  Sailing in the Gulf Stream, he headed north, stopping in Nova Scotia (his childhood home) before crossing the Atlantic and stopping in the Azores and Gibraltar.  At night, when he was not on the helm, during a gale, he had a vision of a Spanish captain from the Pinta at the helm.  This mysterious crew was his only companion. 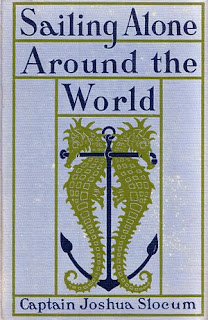 Slocum decided against using the Suez Canal (the Panama was not yet built) because of the danger or Pirates and sailed south along the African coast where he was chased by pirates.   A gale was blowing and he was doing well, but was afraid his mast might break from the strain so he finally decides to reef the sails (shorten them).  The boat (whom he felt were pirates) began to gain on him.  The other boat left their full sails up, but before they could catch Slocum, their mast snapped.  Slocum heads back across the Atlantic, stopping in South Africa and sailing through the dangerous passages in the Straits of Magellan at the bottom of the continent. He sailed up the continent, stopping at Juan Fernandez Islands off Chili, before turning west and sailing across the Pacific to Australia.  In Australia, he began to give talks that help provide income for his trip.

After Australia, he heads into the Indian Ocean, made several stops in as he rounded the Horn of Africa (and giving talks), then sailing north across the Atlantic.  On this last leg, he was nervous as he learns the United States is at war with Spain.  He doesn’t encounter any Spanish ships and returns back home to New England on June 27, 1898.   The book is a mixture of humor, descriptions of sailing and navigating (he used crude methods), adventures in gales and from natives off South America who tried to slip onto the ship at night but found that he had placed tacks on the deck and the stealth of their night adventure was loss as they cried out in pain and jumped overboard.  He recorded many conversations including the Dutch settlers in South Africa who did not believe the world was round and provided it with the Bible.  However, Slocum spoke in awe of God’s providence and creation just as he brought up many marine myths and legends.  It was a pleasure to listen to this book.  The narrator also incorporated the sounds of seagull at the end of each chapter that was a nice touch.  If you are interested in the sea, in sailing or in adventure, I recommend this book.  You might also like this video of Slocum’s life (I am not sure he thought of himself as Canadian, as the video indicates, as he sailed with the Stars and Stripes, but nonetheless, it's a good video: