Today, the Old Man’s Boy in Robert Ruark’s classic childhood memoir, The Old Man and the Boy, turns 100.  (Click here for my review of the book.)  Robert Ruark was born on December 29, 1915 in Wilmington, NC.  Although he grew up in Wilmington, graduating at the age of 15 from New Hanover High School, but he spent much time growing up with his grandfather (the Old Man), in Southport.  His grandfather, who was a pilot on the river, taught him how to fish and hunt, along with many other lessons in life which he conveyed in his childhood memoir.  Ruark attended the University of North Carolina in Chapel Hill, graduating at the age of 19.  He served a bit in the Merchant Marines and as an editor and reporter for a variety of newspapers.  When World War II broke out, he joined the Navy as an Ensign on a gun crew on a merchant marine ship and later held a desk job censoring private correspondence between those fighting in the Pacific and their families and friends, making sure no military secrets were contained in the letters.  Always a lover of the outdoors, he  spent much time hunting big game in Africa, and become a leading columnist for Field and Stream.  Like his father, Ruark had a drinking problem (his death was partly due to cirrhosis of the liver) and died in 1965. 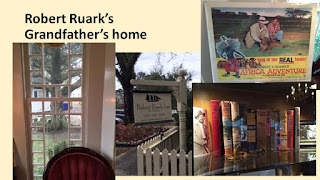 The Star News had a major article about him today (from where some of the above information came from, although I knew some of his history from having read several of his books).  Interestingly, I did learn that his first published book, Grenadine Etching, is a spoof on Gone with the Wind.  It sounds interesting but is supposedly hard to find.  Much of Ruark’s writing is now seen as macho and out-of-date (and somewhat racist), but I still highly recommend the The Old Man and the Boy (I first read it in the 8th Grade) and The Old Man’s Boy Grows Older, which I read a fifteen or so years ago.

There was a birthday party/open house at the Robert Ruark Inn (his grandfather’s home) in Southport this afternoon.  Since I’m in Wilmington, I decided it was time for a road trip.  After lunch, I drove across the Cape Fear to Leland, and turned south on NC 133, driving along the west bank of the river, crossing Town Creek and passing Ft. Anderson (a Civil War era fort), Sunny Point Ocean Military Terminal (it's off-limits), the Brunswick Nuclear Power Plant (ditto) and on into Southport.  I visited the Inn, which appears to be a great place to spend a few nights, and looked around a bit at the memorabilia.  Then I then walked around this seaport town before heading back to Wilmington via the Southport/Fort Fisher Ferry.  It’s a great round trip—the ferry ride is 30 minutes long and cost $5 for a regular sized vehicle.
Thanks to everyone who asked about my father.  I'm back up in North Carolina and staying at his home.  He will get out of rehab on Thursday and is doing much better.
Posted by sage at 9:26 PM 40 comments:

Merry Christmas from a warm (highs today to be in the low 80s) and very humid (like 90%) Savannah.  Two years ago, I was crawling out from an ice storm and now, in a few minutes, I'll be heading to the beach.

For your Christmas enjoyment, I am posting some photos of the Coastal Botanical Garden's Christmas Light show.  This photos were taken on my iPhone and without a tripod.  I wonder what I could have captured if I'd taken a real camera and tripod...  The gardens (generally referred to as "the Bamboo Farm") is located in Richmond Hill south of Savannah.  They had about 8 acres of lights to wander through.


Merry Christmas everyone and have a wonderful New Year!
Posted by sage at 10:21 AM 17 comments:


Looking for a last minute Christmas gift idea, especially for a dad, son, brother, husband, boyfriend or a lover of the sea?  Check out this new book by Erik Larson. 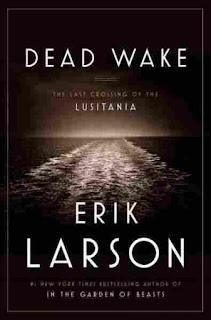 I expect almost everyone who reads this book already knows of the sinking of the Lusitania before they begin reading the first page.  The crown jewel of the British passenger liners was sunk off the coast of Ireland on May 7, 1915.  This sinking is often given as justification for America’s entry into the war even though the United States didn’t join the war on Britain’s side for another two years.  The loss of life was great as the ship sank in just 18 minutes, taking down with her many of the passengers and crews, including a significant number of Americans.  For years, there has been speculation about how a single torpedo brought down the ship.  In fact, until the war was over, it was often thought there were two torpedoes as there were two explosions.  Later it was thought that munitions aboard the ship exploded.  Another theory is that coal dust exploded.  Knowing about these theories, I read the book intrigued and hoping for answers.

Larson does a wonderful job of exploring the events leading up to the sinking of the liner, weaving together a number of stories.  He focuses specifically on the Captains of both the Lusitania (Turner) and U-20 (Schwieger), along with a handful of passengers who survived and left behind accounts of the event.  Larson also mixes in chapters on what was happening in America.  President Wilson, who at the beginning of the war was distraught over the death of this wife, was at the time of the sinking courting the woman who would become his second wife.  On the other side of the Atlantic, he focuses on Winston Churchill, the First Lord of the Admiralty, who was running a top secret department that was intercepting and decoding all transmissions from German shipping.  He occasionally explores the events within Germany where there were debates over the role submarine warfare was ongoing.  Some saw the submarine, which was very new in war, as a miracle weapon, while others felt it violated rules of war and also was likely to bring other countries into the fight. By weaving all these accounts together, Larson creates an intriguing story.  Although I knew ending (the ship sank and American eventually entered the war), I was surprised with much of what Larson brought to life.  It was as if he was completing a giant puzzle; however, there are still a few missing pieces which may never be known.

Although the British never admitted during the war that a single torpedo brought down their ship, they knew this from listening in on German transmissions (radio was also new during this war).  They never admitted what they knew about the German submarine operations in the hopes of protecting other interest and not tipping their hand at how much they understood about German plans.  The British had broken the German codes and had intercepted the radio transmission from the U-boat saying that sunk the Lusitania, a boat they’d tracked from the time it left Germany through its operations along the Irish Sea.  They even withheld information in trying to place the blame on the sinking on the Turner, the Lusitania’s captain.  However, they failed and Turner was exonerated and continued to serve as a captain.

Larson holds to the theory that the secondary explosion occurred from cold seawater flowing over high temperature steam lines that ruptured.  This had immediate impact.  As soon as the torpedo hit, the captain ordered the ship to turn toward the coast (they were 12 miles away) in the hopes of being able to ground the ship.  However, without steam, the ship lost all control and was unable to respond to the command or turning of the helm.  Larson debunks the idea that a coal dust explosion in empty bunkers caused the explosion because the bunkers were so damp that it would have prohibited the dust from exploding.  He also disagrees with the idea that munitions brought the ship down (unless there were a secret cargo) as the munitions onboard were mostly rifle ammunition and not likely to cause such a violence explosion.   Instead, what happened is that everything happened just right to conspire against the ship.  The ship, which could easily outrun the submarine, turned right into its path.  Had the ship been just a few minutes earlier or later, there would have never been an encounter.  Torpedoes were in an early stage of development and this one detonated (at this time, only about 60% of the torpedoes actually detonated).   Thankfully, for those on the ship, the captain had the lifeboats at ready before entering the waters around Ireland, allowing a few of them to launch.  Good news was that the water was very calm which allowed others to survive and be rescued.

There are many unanswered questions.  Why did the British not reroute the Lusitania to a safer shipping channel as it knew a submarine was operating in the region south of Ireland?  Or, why didn’t they escort the ship with destroyers, making it more difficult for the submarine to get off a shot?

This is an exciting book and I enjoyed reading it.  However, it is also a heart wrenching story, especially because so many lives were loss. One of the most horrific deaths was of the mother of a young boy who was quarantined with small pox.  He survived but his mother, who was very pregnant, didn’t.  A story spread through the survivors about a woman going into labor she entered the water as the ship was sinking.  The boy was haunted by this for the rest of his life and thirty years later took his own life.   As for the captains, Turner survived the war (but was captain of another torpedoed ship) and Schwieger was killed when his second submarine (U-20 ran aground and was abandoned) struck a mine.

This is the second book I've read by Larson.  Ten years ago, I loved The Devil in the White City, which was about a mass murderer and the 1893 Chicago World's Fair.  I'd recommend both books and should read more of his writings.
Posted by sage at 12:17 PM 12 comments: 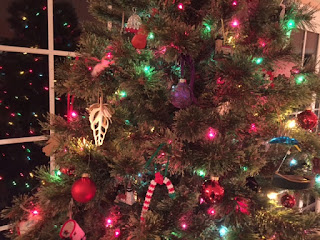 I know I haven't been around much over the past couple of weeks.  My trip to North Carolina to take care of my father was exhausting and I came back home with my plate full.  I've only been on the water once since mid-November...  This past Friday I had my annual Christmas party for my staff.  Beforehand I took these photos of the house being decorated.


The problem with artificial trees is that they look the same year after year.  Outside, temperatures have remained in the 70s (and it's going to be in the low 80s today).

I haven't had a time to try a night shot of the entrance and there is also decorations in the foyer and dining room.  I took these photos with an iphone.  May you enjoy the holiday season!

Other news...  Two weeks ago I was contacted by the Michigan DNR (Dept of Natural Resources) looking for permission to use some of my winter photos of cross-country skiing in the Yankee Springs area in their publications and websites.  I agreed and was honored that they sought me out.  No snow shots in my near future  here in Savannah.  I'm wearing a short sleeve shirt to the office today and yesterday afternoon and Saturday I was in shorts.
Posted by sage at 8:10 AM 44 comments: