Delano: a memory of my work with the scouts 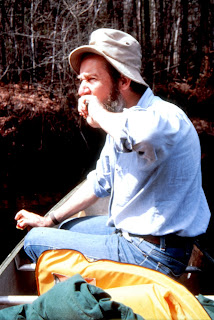 Photo of a friend eating an apple on a Waccamaw River Canoe Trip, 1982 (a copy from a slide). This is not Delano, somewhere I have a b&w picture of Delano splitting wood , but didn't have time to find it. Delano lived near the Waccamaw River.
“What are those government fools thinking, offering classes to teach us how to make alcohol? There ain’t a farmer in these parts that haven’t made liquor at one time or another,” Delano fumed.

It was in the early 80s and after years of prosecuting farmers for turning corn into liquids, a lively discussion was being held with how to do this legally, for internal combustion as opposed to internal consumption. If the farmers made their own, they could reduce their dependence on gasoline and diesel fuel. The local community college offered a course on alternative fuels, but Delano didn’t think much of the idea. The government was meddling where it shouldn’t be meddling. His views weren’t a surprise; everyone in Columbus County complained about the government meddling, except of course when they were first at the hog trough. However, his admission on the moonshining activities of area farmers surprised me. Did he include himself in the bunch? After all, he was a Mormon and the scoutmaster for a small Mormon troop in southern part of the county. Mormons weren’t supposed to be drinking. But then, neither were Baptist and those in that area who weren’t Mormon were members of one the several off-brand Baptist Churches. A part of me always wanted to know what went on in the “Primitive, Fire-baptized, Fundamentalist Baptist Church,” but I never got up the nerve to find out.

Even though he marched to his own drum, I loved Delano. There was never a dull moment when he was around. He was always smiling and joking. Living out on the edge of the Green Swamp, down near the Waccamaw River, Delano could be counted on to tell a story that included hunting and fishing how-to tips. Like his neighbors, Delano supplemented his livelihood from the bounty of the earth and would entertain us telling about the tricks of his neighbor. He never indicted himself, but one had to wonder. One favorite was dialing for fish (using an old crack phone to create an electrical charge that races through the water and stuns the fish so that when they come to the surface you can net ‘em). To hear him tell the story, nobody in his neighborhood purchased canned dog food to feed to canines. Dogs got scraps from the table. Canned dog food was used to chum the waters for fish. Holes were punched in a can that was tossed into the water at a spot where you wanted to fish in a day or two. The dog food attracted fish so that when you came back for business, you didn’t have to spend much time finding the fish. You just had to hope the fish, fat on dog food, were ready to bite into a juicy worm.

I met Delano at a chicken bog for scout leaders held in Fair Bluff. Having been told he was a Mormon, I made sure we had alternatives to the coffee and tea that everyone else would be drinking. I’d gotten a couple bottles of apple juice and offered him one. He refused and poured himself a cup of coffee. At this same event, I was troubled when I learned that a chicken bog contained not only fowl, but also sausage. Realizing that we had several Jewish leaders, I apologized. What little training I’d had from the scouts by this point had stressed sensitive to such issues. But sausage wasn’t a problem, these guys assured me, as long as their wives weren’t around. I’m sure the same applied to Delano’s coffee and soft drinks and most other leaders who indulged in one thing or another.

Delano was a disabled veteran of the Korean War. He once told me about his experiences there. I don’t recall much of what he said, but there was a story about a small group of them lost behind enemy lines and struggling to make it back to safety, surviving minefields, frostbite and starvation. Although he could walk and get around, he wasn’t particularly fast and was limited in the amount of work that he could do (although I do remember him splitting wood with a maul one Saturday when several troops got together to take firewood to people in need). We got along well; both of us believed that when camping, an afternoon nap was a necessity. He had a small but devoted group of scouts who looked up to him and knew that he looked out for their best interest. At camporees, where all the troops in the county gathered, Delano made a point to invite me to eat Saturday dinner with his boys. Sometimes the fare would be normal, venison or fried fish. Other times the menu was down right exotic. In the three years I worked that district, I was served bear, squirrel, turtle, raccoon, and even a greasy opossum.

I came across many characters during my three years working for the Scouts in Eastern North Carolina. I cherish these memories. It’s hard to accept the fact that the boys who were in scouts at the time are now in their 30s. “Oh my,” as they say down there, “how time flies.”
Posted by sage at 8:38 PM