Crossing to Safety: A Book Review 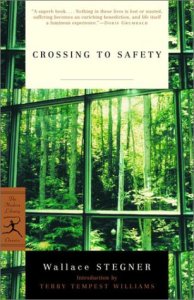 The late Wallace Stegner is one of the great voices of the American West. Not only was he a man of letters, as a teacher he influenced both Edward Abbey and Wendell Berry. Stegner died in 1993, at the age of 83. Crossing to Safety was his last novel. It is the story of two couples, Sally and Larry Morgan and Charity and Sidney Lang. In the heart of the depression, they meet at the University of Wisconsin where Larry and Sidney begin their careers teaching in the English Department. Larry narrates the story which is seen through his eyes.

Crossing to Safety begins in the present. The Morgans have been reunited with the Langs in Vermont, to be by Charity’s bed as she is in the final stages of cancer. In the day they spend together, Larry thinks back over the years they’d known each other, of the joys and sorrows, the hopes and struggles of their lives and friendship. Although sad, it is a very hopeful book. The two were such good friends. Although they accomplish lots in their life (Larry is a novelist), none of them find all their dreams coming true. Yet, they find solace from their faithfulness to one another. They live a good life, despite their problems. Sally developed polio and after the iron lung, never fully regains her ability to get around. Larry is released after only one year of teaching at Wisconsin, a disappointment that leads him into publishing. Sid doesn’t obtain tenure, another disappointment to a young man who inherited a fortune, but was trying to prove himself. He really wants to be a poet, but his wife Charity keeps pushing him further, saying that poetry ought to be a by-product of living, and that “it’s immoral (to only write poetry) and not to get in and work and get your hands dirty.” Charity demands on being in control, a desire she can’t let go of even as she’s dying.

Toward the end of the book, Larry philosophically ponders the end of life as being experienced by Charity and also as have been faced by his wife decades earlier. Having survived polio, she lives like most polio victims, with a capacity to endure. Yet, she also lives knowing that there will come a time that all polio survivors face, when the whole body seems to collapse at once. She learns to live by turning away from such prospects and living life fully. Certainly, the Langs and Morgans lived a full life, creating a very hopeful novel despite the centering event of the book being Charity’s impending death.

A strong point of this book is Stegner’s ability to create a sense of place. You experience not only the people, but the places in which they live. In her introduction to the Modern Library edition, Terry Tempest Williams places this “elegant novel” within Stegner’s “geography of hope.” I agree. By the way, I also highly recommend Terry Tempest Williams memoir Refuge: An Unnatural History of Family and Place.

Check out this novel. It’s good. I’m not sure why it’s taken me so long to get around to reading it. The book is full of hope as the author paints a wonderful picture of two couples living
ordinary but not mundane, fulfilling but not overly fruitful, but always faithful lives.
Posted by sage at 10:46 AM