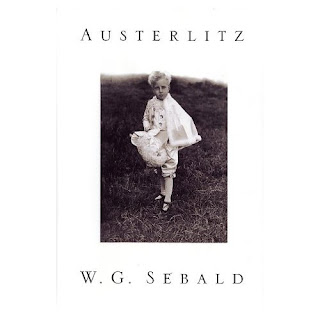 This might be the most honest novel ever written in that it describes stuff just as our brains (or maybe it’s just my brain) operates. The pages leaps from one topic to another, yet it’s all held together with a thin thread of commonality. Like a brain exploring topics, so does Sebald’s last novel (Sebald died in a car wreck in 2001). With paragraphs that vary from a dozen to several dozen pages in length (if a paragraph is defined as one indention to another), Sebald’s novel wanders through architecture, nature and history with special attention given to creating lists of stuff. However, Sebald’s prose is wonderfully descriptive; it’s just a chore to get through this book. And now that I’ve read it, it’ll hang in the recesses of my mind for a while as I try to understand what it all means.

Austerlitz is told from the point of view of an unnamed narrator who either has the patience of Job or is a glutton for punishment. The narrator befriends the rather unapproachable Austerlitz, a lover of architecture, in the 60s. Over the next twenty years, first by accident and later by design they continue meeting and the narrator gradually learns Austerlitz’s story. He was raised by a Welsh Calvinist-Methodist (isn’t that an oxymoron) pastor, who adopted him at the beginning of the Second World War. It turns out that Austerlitz, whose parents were Czech Jews, was saved from the horrors of the holocaust by being sent to Britain. He makes it his life’s goal to rediscover his past life, traveling all over Europe, commenting on the architecture of libraries and train stations along the way.

There are some interesting themes in the book. Darkness is one. The book starts out in the Antwerp Nocturama (a collection of night animals), but the narrator quickly moves from the eyes of owls to gazes of “certain painters and philosophers to a waiting room in the Antwerp train station, all this in just three pages of a 27 page paragraph. History is another. As Austerlitz discovers his history, the reader is given a history of Europe from Napoleonic Wars (Austerlitz was also the name of a battle in the war) to Nazi Germany. Architecture is another. Austerlitz is a student of architecture and the narrator is constantly telling us about the design of some building. By the way, I take great pleasure in writing three word sentences while describing this book. I’m not sure there is a sentence in the book that’s less than a dozen words, and a dozen words would be a short sentence for Sebald.

I’m not sure I recommend this book. I suppose I’ll recommend it with a warning. It took me a couple tries to get into it. The writer has a wonderful ability to paint scenes, but his writing is not at all conventional. However, breaking up the prose are interesting black and white photographs. These images are mostly stark, but haunting, as is much of the prose. If you have read this book, I’d be interested in knowing your thoughts. If you haven’t read it, does it sound like something you’d want to read?
Click here for a list of other book and movie reviews by Sage.
Posted by sage at 7:44 AM