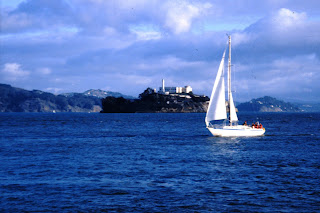 I took the photo to the right back in the late 80's from the Larkspur/San Francisco ferry. It's a copy from a slide.

I watched the Lady Heels lose to Tennessee last night. After Carolina's loss, I’d given up on the Men’s NCAA basketball tournament and had gone over to the women’s. The first half was dismal, with neither team playing their potential. Carolina was down by one at the half. The second half looked a lot more like championship basketball and for the first fifteen minutes, Carolina dominated and played like champions. Then due to fouls and injuries, Carolina lost their lead and slipped behind, unable to catch up. I’m done with basketball for the season. I’ll let Karen keep me up to date on what the Pistons are doing (in addition to taking shots at the Bushies, she's a rabid Detroit fan). As a general rule, I don’t watch pro-basketball.

Baseball begins today. In honor of the game, check out the poem Pat posted on Friday. his poetry is wonderful, but back to baseball. Will the Tiger’s go to the World Series again? If so, will they win it all? Will the Pirates finally break 500? Will this be the year I’ll finally get to see a game at Wrigley’s Field? We’ll see. On Wednesday, the Whitecaps (a nearby single-A team) have a preseason home “expedition game.” It’s free and they’re only playing seven innings, which is probably good since the weather gurus are now calling for snow.

If anyone is looking to significantly increase their library, check out Kevin’s blog. He’s creating a jackpot of books that he’ll give away later this year to the winner of his contest. It's a great way to increase his blog traffic. (I wonder if he'll pay for shipping if one of my readers from somewhere like India or Turkey or Iraq wins?) Each week he adds to the stash. Some of the books are from his collection (the thought of giving away my books brings chills, probably identifying one of my idolatries). Kevin also plans to lean on his connections in the publishing business for other books to sweeten his pot. So far, most of the books are theological in nature, but there are others too as well as some classical recordings. Besides, for most people, there’s probably no better sleep aide than reading a thesis written by a 17th Century Puritan. It should be noted that Kevin has given away books before. Murf was one of his winners—I’m not sure it helped but Tim and I did what we could to stuff the ballot box for her.
Posted by sage at 10:03 AM