My Paddle to the Sea 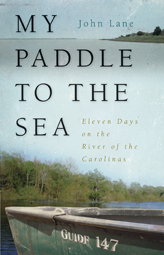 John Lane, My Paddle to the Sea: Eleven Days on the River of the Carolinas (Athens, GA: University of Georgia, 2011), 208 pages, no photos, one map.

Having grown up paddling what I considered the rivers of the Carolinas (the Cape Fear and Yadkin/Pee Dee watersheds), I have wanted for some time to take this trip (on paper) with John Lane down the Broad, Conagree and Santee Rivers.  This basin does drain both of the Carolinas, but only a part of the western part of the state.  When I lived in Hickory NC in the mid-80s, I had paddled a couple of rivers that flowed into the Santee basin through the Catawba River. Lane limits his trip to the lessor of the Carolinas (South Carolina) as he stars out on Larson Fork, a creek that flows by the back of his property in Spartanburg, and follows it downriver to the sea.  But he doesn’t begin with this trip, but with a fateful family vacation three months earlier in Costa Rica, where they paddled Whitewater Rivers.  It had been raining and on their last day, there were several fatalities.  Thankfully, the Lane family all survived, but it was a horrifying experience.

Lane is not the first to paddle this river, nor even the first to write about it.  In his possession, he carried the writings of others who have paddled the river, including a group of students from the college where he teaches (Wofford College), who’d paddled the river in the late 60s.  Although today, much of the river goes unnoticed, in the 18th and 19th centuries, before the railroad, water was the easiest way to travel up country.

Lane is accompanied by two friends.  Venable, a lawyer from South Carolina who found a new and agreeable life in Alaska joins him for the first week.  He a large burly dude that looks like a bit like a John Brown and John Muir mix (139).  Although he sympathizes to environmental causes, he never joined the Sierra Club because he disliked their cup (73).  The man must have spent his time hiking in well watered locations and not had to scoop water from streams or springs that’s only an inch or so deep.  Lane and Venerable paddle through the upper part of the river.  Most of their days are rainy, but they make the best of it as they share stories of their lives and experiences outdoors.  At Lake Marion, Venable heads off to do some turkey hunting before heading back to Alaska.  Steve, a slender but strong paddler, joins Lane as they paddle through coastal plain on the way to the sea.

The two sections of the river are very different.  The upper part of the river is fast as the water rush off the mountains and foothills.  Along the way, they pass places of history, where water powered industry.  Some of these dams are still present and present challenges for them as they canoe downriver.  This section of the river drains a large amount of the upcountry and even parts of Western North Carolina (through the Warteree/Catawba River system that joins the Congaree to form the Santee. Lane mixes into his narrative history from the region.  This area saw Revolutionary War battles.  In the early 18th Century, they attempted to tame the river for transportation and power.  The river proved especially difficult for transportation and most of the canals were soon abandoned.   However, “the rivers, like the Scots-Irish who settled the upcountry, had proved stubborn and resistant to authority” (117).

In addition to historical insights, Lane shares stories of authors who lived along the river.   Two of the more prominent ones are Julia Peterkin and Archibald Ruthledge.  I’ve not read Peterkin (but she’s now on my list) but I have found the writings of Ruthledge to be soulful.  Although I have a problem with his paternalistic views of African-Americans (but then he was writing in the 30s and 40s), I am moved by the way he describes the land and appreciates the wilderness of the Santee River.  Lane also offers a bit of advice on the art of canoeing and canoe-camping, including a nice description of the “J-Stroke” which the paddler in the stern uses to keep the canoe straight.

The book ends, unsurprisingly, at the sea!  Reading My Paddle to the Seas is an easy and enjoyable float without ever getting muddy or having a sore back from a day of paddling.

It would probably be a toss-up as to whether I've written more about rivers or trains...  Here are are the books I've reviewed in this blog that deal with flowing water (and I may have missed some):