Rock Me on the Water: A Book Review 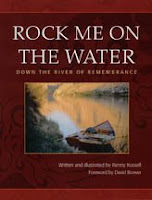 Renny Russell, Rock Me On the Water: A Life on the Loose (Questa, NM: Animist Press, 2007), 242 pages, lots of photos and illustrations.

I have found me a new coffee table book! Unlike many such books I own, this one I devoured the words long before I tired looking at the photographs. Rock Me on the Water is a beautiful book and an uplifting story. The book centers around a solo trip down the Green River in Utah, tracing the route the author and his brother took in 1965. At that time, Renny was 18 and an art student. His brother was 21 and had just graduated from Berkeley. The two young brothers had also just contracted with the Sierra Club to publish On The Loose, a book of quotes, thoughts and poetry illustrated with their photographs. They were celebrating the upcoming publication with this trip. The river was at flood stage. While running Steer Rapids, their rubber boat folded back over, dumping them and their gear into the water. Renny survived. The last he saw of Terry was when he helped him grab hold of a duffle bag for flotation.

Forty years later, Renny, who is now a seasoned boat builder and river guide, comes back to this section of the Green for the first time since that fateful trip, ready to face the ghosts of the past. It’s a solo journey in a boat he built and named Seedskeedee (The native name for the Green, a word that means prairie hen). While describing his trip down the Green, Renny shares with us the story of two brothers who grow up longing to be in the wilderness. He also tells of his own journey after the death of Terry, as he dealt with his loss. “My life has been a search for the knowledge and secrets,” he writes, “that have offered hope and strength after the flood.” (188) As he and his brother had done in their earlier book, Renny raises our awareness of the environmental challenges facing the human race.

I purchased my copy of On the Loose at a Sierra Club meeting back in the late 70s, when I was a college student in North Carolina. I was taken with the hand-scrolled calligraphy and the very intimate photographs. Renny admits that their film had mostly been processed in drug stores and that Ansel Adams didn’t think the Sierra Club should print the book. But David Brower, the club president at the time, insisted the voices from these two brothers should be heard. In time, the book sold over a million copies. Many people, like me, fell in love with it. At some point my copy got stowed away, but a few years ago, after having left the West for the Upper Midwest, I found myself going back to it time and time again. When I first purchased On the Loose, I had never been to the West Coast. When I look back at that book, along with Rock Me on the Water, I see many places with which I’m familiar: I’ve hiked the John Muir Trail, backpacked along the ocean at Point Reyes, hiked in many of the same canyons on the Colorado Plateau, and explored some of the same places in Idaho. Now, having read Renny’s story, I’m ready to build a river boat and head west.

This is a wonderful book that I’ll enjoy for decades. Now, having visited Renny’s website, I wished I had ordered my copy from him and received a signed edition! I recommend this book for several reasons. The photographs and illustrations are wonderful, the story is moving, but most importantly, you’ll discover how one person found hope and overcame tragedy. I’m also indebted to the author for sharing with us the full story of On the Loose.
For other book reviews by Sage, click here.
Posted by sage at 9:14 PM