The Founding Fish: A book review and a personal tale 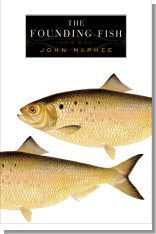 I left the bakery, a place I’ve written much about, to try my hand with the Boy Scouts. For half the money, I got about double the trouble, yet my five year sojourner into the world of professional scouting has served me well.

In the spring of 1982, we had a council camporee at the newly opened “Camp Bowers” near Elizabethtown, North Carolina. Scouts and leaders from all over Southeastern North Carolina assembled on Friday and on Saturday morning things were going along well with patrols competing against one another. At noon we broke for lunch. It was about this time the winds picked up and we started getting a whiff of smoke coming from south. At first we didn’t think much about it, but as we began the competition resumed in the afternoon, smoke filled the air. After checking with the state forest service, we learned that the burning of a slash pile several miles away had gotten out of hand and there was a major forest fire heading in our direction. We quickly called off the games and the scouts packed up their gear and moved out. In thirty minutes, the site was almost all cleared of kids. There was one troop left, Roscoe’s troop. Although there were clear instructions that there were suppose to be two adults with each troop at all times, Roscoe and his assistant had left their Senior Patrol Leader in charge in order to attend a shad bake. The shad were running up the Cape Fear to their spawning grounds. Roscoe and friends spent the afternoon at Lock #1, catchin’, cookin’ and eatin’ shad (while consuming grains in a liquid form). I was left to figure out how to get this troop out of the fire’s path. We loaded them and their gear up on the camp truck and drove them into the community of White Oak where we stayed until Roscoe returned later that evening.

In the best of my knowledge, the above is the only story about shad not included in John McPhee’s natural history of the fish. This is a book that tells you everything you can possibility want to know about shad, a fish that begins its life in American rivers, travels out to sea for three to seven years, then returns to spawn and (in most cases) die. McPhee is a shad fisherman. And from the way he claims the title, you’d think that shad fishermen are the king of all fishermen and that the shad is every bit as magnificent as Ahab’s white whale or Job’s leviathan. He tells about catching shad from Maine to Florida. He tells about the big ones that got away. He tells about how the roe shad fight harder than the bucks. He tells about how shad strive to give their young the best chance of survival by getting as far as they can up the river. He tells about the trouble dams’ create for shad. He tells about how shad got into the rivers of the American west. He tells about the mythical role assigned to shad in the Revolutionary War (it was probably a myth that shad kept Washington’s troops from starving at Valley Forge). He tells about how shad helped end another war (The Southern General Pickett and his staff was at a Shad Bake the day the Union Army attacked his troops south of Petersburg. Leaderless, his army was routed, which lead to the fall of Petersburg and Richmond and set in motion the end of the Civil War.) This book is also partly a scientific text as McPhee consults experts across the country as he tries to understand this fish. The book ends with a discussion of PETA’s criticism of fishing. McPhee absolves himself of guilt since he eats the fish he catches (or at least most of them).

Surprisingly, this is a very interesting book. It’s well written and holds your attention, at least till the end when he starts talking about cooking shad roe and using shad milt (sperm). I should say that it appears to be well written as I listened to an unabridged audio version of the book (the audio book is a bit over 14 hours long). If you like fishing, or reading about fishing, you’ll enjoy this book.

Sorry to leave you hanging about the forest fire at camp. I promise to write more about it and about Roscoe’s misadventures later.
Posted by sage at 11:17 PM