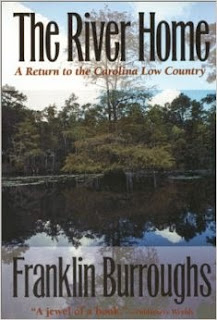 This is a book review/personal memoir as I recall some of my own experiences on the Waccamaw as I review the author’s book about a trip down this river.

I lived in Whiteville, North Carolina for three years in the early 1980s.   During this period, I spent a lot of time around Lake Waccamaw and took two incredible overnight trips on the Waccamaw River, between the lake and Old Dock.  I remember thinking the Waccamaw was possibly the finest black water river in Eastern North Carolina (it would be a close call between the Waccamaw and the Black River).  A few months ago, when I was reading John Lane’s book, Waist Deepin Black Water, I learned of this book about a trip down the Waccamaw and immediately set out to find a copy.  I was pleasantly surprised at the quality of the writing.  This is a wonderful book and now that I have read it, I will have to find another book, The Voyage of the Paper Canoe by Nathaniel Holmes Bishop.  In the aftermath of the Civil War, Bishop paddled his canoe along the eastern seaboard.  When he reached Wilmington, NC, he took a train to Lake Waccamaw and then paddled down the river to Georgetown, SC, before continuing on along the coastline.  Bishop’s journey inspired Burroughs.

Franklin Burroughs teaches at Bowdoin College in Maine, but he grew up along the banks of the Waccamaw River in Conway, South Carolina.   In a used bookstore on Cape Cod, he came across a copy of On the River which introduced him to Nathaniel Holmes Bishop.   Recalling his childhood, in which he’d fished much of the South Carolina sections of the river in Horry County, he decided he should paddle the whole river.   His father took him to Lake Waccamaw for the start of his journey, but his introduction to the upper part of the Waccamaw came on the drive north when they passed the river in Pireway and there was a baptism being performed.  Burroughs traveled the river from the lake to Conway by himself, then had a friend of his join him as they paddled down to Georgetown.

At the beginning of the book, Burroughs provided a historic description of Horry County (known among themselves as the “Independent Republic”) that I found to be less than flattering.  As he noted, there was so little of interest in the county that wars past it by (there were no battles there in the Revolutionary War or Civil War).  The big rice plantations laid south of Horry near Georgetown and Charleston (or north, although he doesn’t mention it, along the Cape Fear River in North Carolina.  As a native Tar Heel, I needed to put in a plug).  Horry was a place of turpentine stills (along with another kinds of stills) and lumbering operations.  It wasn’t until the last century that people discovered the beaches of Horry (Myrtle Beach, etc) that has put the county on the map.  Just ten miles or so inland from the beaches flows the Waccamaw, a river that is still fairly wild.
Burroughs made his trip in 1985 (two years after my last trip down the Waccamaw).

The upper part of the river is small and sometimes one has to pull the canoe over logs that have blocked the river.  As he approaches Crusoe Island, a piece of high ground in the middle of the Green Swamp a few hours paddle from the lake, he encounters Thomas Spivey, a resident of Crusoe who lets him paddle one of his dugout cypress log canoes and make him a dough bowl which he hollows out of a log plank.  Spivey also shows him the snakes that the catches and sells to museums and laboratories.  When I ran the river, I was always shocked at how few snakes one saw on it around Crusoe Island, due to the efforts of the Spivey’s at catching them.  I think it was the Spiveys who had a pit with snakes in the bottom, crawling over one another and even though I am not overly frightened by snakes, the thought of falling into that pit would be akin to falling into hell.  The man I best remember at Crusoe was Dodo (I think his last name was Clewis) who I believed lived just north of the Spiveys (if my memory is right, the Spiveys lived just south of the landing, Dodo lived just north of it).  I still have a bread bowl that Dodo dug out of a plank of aged swamp wood (probably harvested from Georgia Pacific land).  In the early 80s, most folks on the island made their living from the swamp and it was a place game wardens were always weary even though they did arrest a number of swamp residents for selling illegal game.   It was an interesting and a little scary place as there was only one road into the island from Old Dock.  If I remember correctly, that road was built in the 40s and not even paved until the 60s.

Paddling down from Crusoe Island, he recalls stories from Bishop’s journey such as staying in a home of the foreman on the turpentine still (the foreman was a Gore and even today, there surname Gore is common in lower Columbus County).  Below Old Dock, the river becomes wider.  He tells of stories of men building log rafts of timber and floating them down to Conway to the mill.  At Pireway (where I had the last connection with the river), riverboats would occasionally make it up this far during high water.  In my blog, I have written about Delano, the scoutmaster of a Mormon troop in Pireway (although the troop was registered and located in “Tabor City, to the west of Pireway, all the members of the church I knew when I worked that territory for the Boy Scouts lived in the Pireway area).  Delano was quite a character and you’ll have to go back to my post on him to see what I mean.

South of Pireway, Burroughs is in territory that he was familiar with as a youth.  He begins to tell stories of his family and how they ended up in Conway as well as his own fishing adventures with his father and with friends along the river.  I particularly liked his story of the two-sided paddle wheelers that made it up the river (they were still coming up when his father was a boy).  Having paddles on both sides of the boat, the captain could reverse one paddle while moving forward with the other, allowing him to navigate the narrow twists and bends of the river.  Burroughs also tells about the lumber operations in Conaway and his memories of his grandmother’s home.   As he continues south, with a friend, he begins to weave in the history of the rice plantations built upon slavery that dotted the river as it approached Georgetown.   There, too, the river joins the much larger and silt-filled Pee Dee River before flowing out into the ocean.  It was in this section that they got caught trespassing on private land but befriended the caretaker and end up being invited for breakfast.

I found this to be a delightful book and makes me want to go back and once again paddle the Waccamaw as it has been over 30 years since I have been on its dark waters.  One of the back cover reviewers of the book compared it to Goodbye to a River by John Graves.   I have also reviewed Graves book and both authors do a fine job of weaving together their adventures with the history of the area.   Even if you never set your eyes on the Waccamaw, this book is a treat to read.
Posted by sage at 9:26 PM