BREAKING NEWS: From what I've heard about Gov. Mark Sanford of South Carolina, we probably wouldn't agree on a lot of things. But when I found myself reading a news report that he'd gone missing and was somewhere along the Appalachian Trail, I can't help but to think that I'd like the guy! He almost sounds like a character out of a Carl Hiassen's article. Click here to read the rest of the story... On a sad note, I should at least mention that passing of Kodachrome. What use to be a favorite film (when I first moved to the desert, I feel in love with Kodachrome 25) is no more. Of course, I haven't shot a roll of film in three years. Times change... 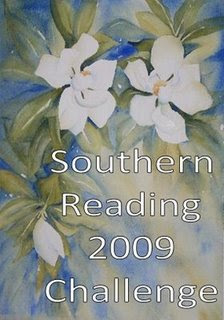 This is my first book for this year’s Summer Southern Reading Challenge (It replaces a book that I was planning on reading about a Texas river). The Cape Fear was published in Rivers of America series, a collection of 50 some books that looked at the history and geography of various streams across the nation. From what I can tell, there was only one edition published. I got a copy via interlibrary loan. Ever since finishing my dissertation almost a decade ago now, I’ve been reading all I can on the Cape Fear region in the hopes of one day writing a book that draws on my own history and that of my Scottish ancestors to the river upon which they settled and near which I was born. This book is a valuable addition in my study. The photo below looks across the Cape Fear River, toward Wilmington. It's a copy from a slide and I shot the photo in the late 70s. 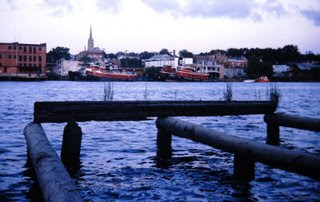 The Cape Fear is the main river system in North Carolina. It’s the only major river that flows out of the state and into the ocean. A number of rivers in the state, like the Yankin, Catawba, Lumbee and Waccamaw flow southeastwardly into South Carolina where they enter the ocean at Charleston or Georgetown. Others, like the Roanoke and Neuse, flow out behind barrier islands that have served to keep them from developing communities linked to the ocean. Unfortunately, geography played a bad hand on North Carolina and its development. The Cape Fear drops it sediment some forty miles into the ocean, creating the treacherous Frying Pan Shoals, causing ships wanting to enter the Cape Fear the necessity of sailing around their thumb to get into the river. Before the railroad, in an era when rivers were the main means of transportation, North Carolina saw most of its produce and goods bound from foreign markets leave the state and exit through Charleston or Norfolk.

Ross spends much time describing the attempts and settling the Cape Fear and then the activities around the river during the Regulator’s Struggle in the 1760s, the Revolutionary War in the 1770s and early 1780s, and the Civil War. North Carolina has always had its share of tax hating people. The Regulators were backcountry farmers who struck out against the Sheriffs who were taxing for the British. All though their struggle has been seen as a precursor to the Revolution, not all of the Regulators fought on the American side as many of them saw the problem as corrupt local officials instead of British policies. The beginning and the end of the Revolutionary War saw action along the Cape Fear. It was the hope of the British at the beginning of the war to raise a large army of Highland Scots to fight for the King. Such an army was raised, although not as large as was hoped, but after a few minute battle at Widow Moore’s Creek (now known as Moore’s Creek), the British and their allies were defeated. In the later years of the war, the Cape Fear witnessed Cornwallis wrath (he burned Brunswick, an early settlement on the river). His march to Yorktown took him through the headwaters of the river. In the Civil War, the river became known as the lifeline of the Confederacy as it was the last Southern port to fall into Federal hands. The two largest naval bombardments of the war occurred at Fort Fisher in December and January 1865. In the first battle, the Federals failed to take the fort. They were successful in the second.

On glaring omission is the discussion of the Cape Fear in the World Wars. Both wars saw shipyards active in Wilmington and in the first two years of the Second World War, German U-boats were very active off the Cape Fear, taking advantage of Frying Pan Shoals which forced ships out into the ocean instead of allowing them to run close to the land where airplanes could spot the submarines.

Ross does a good job of explaining the challenges of the upper sections of the river. Like all rivers, the fall line limited navigation. Unlike many other eastern rivers, attempts to provide water routes on the Cape Fear, via locks and dams through the rapids, proved too difficult. Later, dams were built upstream to power textile mills. Interestingly, Ross doesn’t spend much time discussing the difficulties along the lower Cape Fear. As ships became larger and drew more water, the numerous techniques have been attempted to deepen the channel and keep it from silting up. One of the first attempts was to close a second inlet just south of Fort Fisher. This shallow inlet, which was a favorite of blockade runners in the Civil War, was closed in the late 19th century and the river deepened to allow larger ships to enter the harbor at Wilmington.

The main strength of this book is Ross’ stories. Ross fills each chapter with antidotal stories about the river and its challenges. He is nostalgic. Writing in the mid-60s, at a time when the river was hopelessly polluted, he laments what has been lost. When we first moved to Wilmington in 1966, the river was so polluted that you wouldn’t want to put your hands in it. Today, thanks to sewage treatment facilities and stronger controls on industrial discharge, life has returned to the river and its waters are much cleaner.