I'm leaving later this morning for New York City.  It's a good time to go because one of the radio reports this morning (as I was coming back from a fire call) said the heat index today could be as high as 114!  The seven day forecast are for temperatures to be in the high 90s or low 100s, with high humidity which makes it feel even hotter. 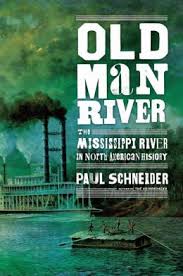 This was an ambitious project.  The Mississippi River and its tributaries stretch from the Rocky Mountains to the Appalachian Mountains to the Canadian border.  The river is prominent in the American psyche and from the beginning has served as an artery that connects the center of the country.  The waterway connects many major cities and industrial areas that have grown along its banks: Pittsburgh, Cincinnati, Minneapolis, Kansas City, St. Louis, Memphis, and New Orleans.  The Mississippi has been a blessing, but at times also a curse as wars have been fought over the river (and against the river as it is uncontrollable and known to flood).  The River has given American one of its best authors, Mark Twain, and influenced the music styles of jazz and blues.  Knowing this, I dig into the book.

However, I will say I came away from the book a little disappointed.  Schneider begins telling about the prehistory of the river and then a bit about the Native American culture that existed along the river and their interaction with the early Spanish explorers.  Then he shifts to the French and English and the battles and alliances with Native Americans as both countries sought to control the river and the continent.  Most of this battle was in the northeast section of the watershed, along the Allegheny River down to the forks (where the Allegheny joins the Monongahela to form the Ohio River) which is now Pittsburgh.  The struggle for the continent, which was a small part of a larger struggle between France and Britain in the 18th and early 19th Centuries, made for interesting reading.  This took up nearly two-thirds of the book.

By the point that the English establish dominance over the upper waters of the river (and the lost the lands to the colonies), Schneider seems to have run out of steam.  He spends a chapter on the flat and keelboats, then two chapters on the steamboat age (one of rather short chapter exploring the role steamboats played in slavery).  Then he writes about Civil War.  Afterwards, he shifts to discussing the battle to control the river and its negative impact to the marshland in Louisiana and how floods are worse than ever.  His stories about music on the river is limited to one WPA interview (done during the great depression) of a former slave and the songs he remembered from a lifetime of working on the river.  Schneider also only mentions the large amount of materials still transported on the river (coal, coke, iron ore, sand, and grain).  Although he mentions floods, he doesn’t weave in any of the stories surrounding floods as he did with his earlier writing exciting.  My conclusion is that he was ready to be done with the project, which left me as a reader wanting more.

Several places in the book, Schneider becomes more personal as he gets onto the river.  He paddled parts of the Allegheny (including a section I’d paddled in northern Pennsylvania), parts of the Mississippi and headed out in a motor boat to explore the river’s edge as it pushed out into the Gulf of Mexico.

I enjoyed Schneider’s writing style. I just wish he would have been as detailed with the last 200 years of river history as he was with the 200-300 years before.  Perhaps such an ambitious project deserves a second volume.
Posted by sage at 7:04 AM