Traveling, my last trip and my parents, and fancy bathrooms 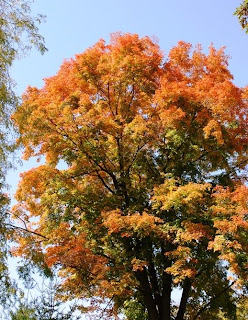 The photo was taken two weeks ago in my front yard...


This week, I’m traveling again and as I write, I’m sitting in O’Hare, wondering when we’ll get out as a record low front is moving through… I’ve spent the night here before, it ain’t fun. But they do have new toilet seats in the bathroom that puts a clean covering on the seat for you. I was amazed… Once I get to Central America, you can be sure the bano will not be that fancy. But enough of that, I'll leave further bathroom reviews and comments to Murf and Bone.

While I start another trip, I am going to reflect on my past one and break my rule about not writing about family in this blog as I share a glimpse in my recent trip home last week. As for catching up on blog posts, that’ll have to wait till November.
---
My short trip last week to North Carolina was to check up on my parents, to see how my mother was doing and spent time with my father. I knew that when I came down, he’d let my mother go into adult day care so we could spend time out on his boat fishing.

I don’t think I’ve been prepared for my parents aging. My father is still in good health and always seems much younger than his years when he’s behind the wheel of his boat, steering it through the channel. As the bow splashes through salt water and the wind blows in his face, he could be a teenager. It’s hard to imagine that he’s his age.

My mother is another story. With Alzheimer’s there is little hope and my prayers as I was flying down to North Carolina had to do with accepting that cup and being able to see (or at least have a glimpse of) grace. A year ago this summer, she’d called my sister and me by name. That was the first time in a while that she’d used my name and may well be the last, for she hasn’t used my name since. For me, during this past trip, that period of grace came one morning around the kitchen table. On this visit, I found Mom even less vocal than before. I think I could count on one hand the number of words she spoke in the four days I was home. But she surprised us one morning when she said, “I believe…” As soon as the words came out, she got quiet and didn’t say anything else. In the head, I knew she was beginning a sentence. My mother often was timid and would begin a sentence this way… “I believe it’s gonna rain,” she might say, never wanting to put herself out there (in case she was wrong) and say “it’s going to rain.” Although I have no idea what was on her mind that morning, the phrase, “I believe” was enough. It took on a whole different meaning for me, reminding me that sometimes belief is all we have.
###

I wrote the above sitting in O’hare. I’m posting this from a wonderful view of the mountains in Costa Rica. (see photo below) Life is good and the world is beautiful. 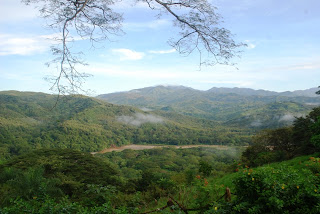