It seems that I've been running so hard that I don't know if I am coming and going and, sadly, haven't been doing any real running. But I did get some time to step off the treadmill last weekend and went up to Grand Rapids for Art Prize. This international competition has 1000s of pieces of art spread all over the downtown area. I took my camera and snapped a few photos of art pieces that I liked and created a powerpoint "post cards" for you to see. Click to make the photo larger. 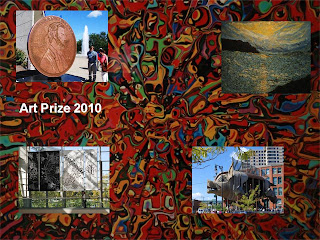 All kind of art is on display during Art Prize. The public gets to vote on their favorite pieces and then the top ten selections are in a run-off, again with the public voting. The various types of art include large and wild sculptures (like the pig and the penny, that's made of pennies), fabric, paintings, photographs, drawings among others. 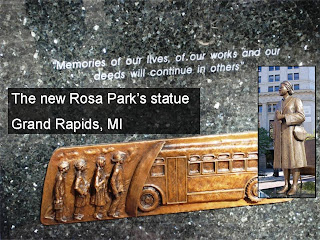 The city of Grand Rapids also revealed a new statue of Rosa Park, who lived much of her life in Michigan and would visit Grand Rapids. This "post card" shows both the statue and it's base. 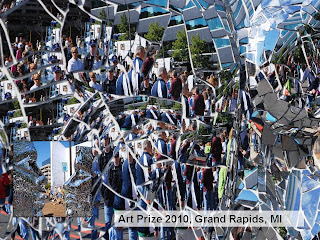 Another favorite activity at Art Prize is people watching! Maybe I'll get time to write more (and share more photos) later. Until then, as Red (of the Red Green show) says, "keep your stick on the ice."
Posted by sage at 8:41 PM