The winners of Art Prize were announced last night. The main winners are determined by a public vote. If I remember correctly, there was over 1700 pieces of art. A week ago, based on the public vote, they reduced the pieces being considered down to 10. On Thursday evening they announced the winner. I happened to have taken a few photos of it and have a composite below. It didn’t make the top 10, but it was a favorite of mine. In my last post, two of the top ten were included: the penny and the flying pig. (click on photos to enlarge) 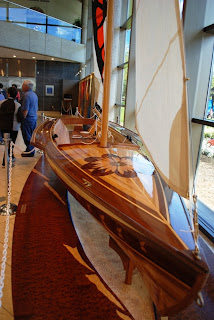 Look at the wood on this sailboat. It's beautiful (but I'd be afraid to sail it)! Maybe this boat will give master boat builder Ed some idea. Somewhere, deep in his archives are photos of a beautiful kayak, with wood much like the boat above. 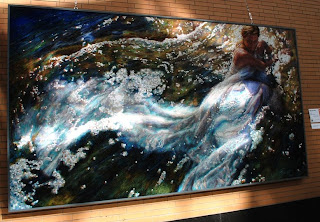 This was teh second place piece. It's lovely and my photo doesn't do it justice at all. The piece is called "Svelata," and was produced by Mia Tavonatti of Santa Ana, CA. 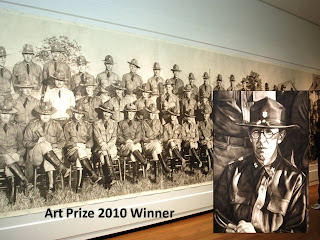 The winner of this year's contest was Chris LaPorte (a local boy--who lives in Grand Rapids) photograph-like, life-size drawing of 53 cavalry officers. The piece is titled "American Officers, 1921." LaPorte used a photo he'd found at a garage sale to to do the drawing which earned him $250,000. Not bad earnings for over 800 hours of work (I'd never have the patience). Ily, my favorite red-headed Cuban who reads this blog is also an artist that likes sketches. She has until next fall to get her piece ready.
To see more of the winners, go here. When I was up there last weekend, I only saw seven of the top ten, as the art was scattered all around the downtown area. It's quite a show and a lot of fun and I'd recommend it if you are ever in the area in early October.
Posted by sage at 7:20 AM