A Day on the Water

I’m with limited internet access, so I will be catching up with blogs Sunday or later… Anyway, here is a narrative of yesterday’s adventures with a couple of pictures. 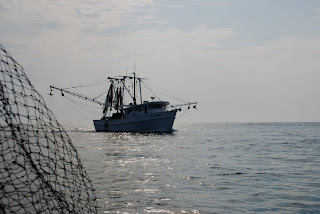 Standing on the bow of the boat, I cast the jig toward the bank, yanking the line and then reeling, so that the jig drops to the bottom then jumps up, then drops again. The boat rocks with the swells and I keep my legs apart to maintain balance. We’re fishing for trout in Carolina Beach Inlet and on my first cast, I hook a flounder. It’s great eating, but as hard as I try, I just can’t stretch it to the 14 inches legal limit. It comes in as 13 ½ inches and I slip it back into the water. I’m a bit superstitious as many times I’ve caught fish on the first cast and then never get a bite. I keep getting occasional bites, but can’t seem to hook any. Several times, I think I have a bite only to realize that I’m hooked on a mudbank and have to pull and release and play with the line. Most time I get the lure free, but do lose a couple of jigs. It doesn’t matter; it feels good to be back on salt water. 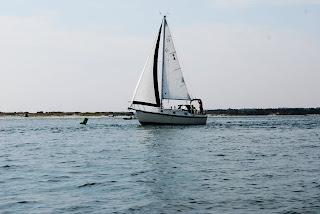 As we fish, I watch the shrimp trawlers work the mouth of the inlet. You can tell the ones culling their catch as the gulls follow close behind, looking to pick up an easy meal. Midmorning, the channel buoys are almost sideways as the tide is running in so fast. The water clears as the cleaner ocean water pours into the inlet. I hook a nice sized speckled trout. He fights hard, but I keep the line taut and in a few minutes, he’s in the net. He probably weighs three pounds. We continue to fish. Dad catches another trout, maybe two pounds. As high tide approaches a little after noon, the first of the shrimpers head to port, passing just off our starboard. A sailboat heads out to see, passing close by. We’re getting no more bites, so we run out of the inlet and turn north, following land for nine miles to Masonboro Inlet, where we try our luck off the rocks that stabilize the channel. A fish strikes my line and I fight it, and it slowly is reeled to the boat and into the net. It’s a puppy drum, but like the flounder is just shy of its legal limit (16 inches). He goes back into the water. It’s getting late and we head back toward the boat ramp at Snow’s Cut, running through the Intercoastal Waterway. It’s been a good day on the water.

Later in the afternoon, in the shower as I clean up, I realize that although I’m on firm ground, I’m still feel the sway of the boat.
Posted by sage at 8:37 PM