Quotes from Sage's readings, a photo, and some other nonsense (I mean catch up) 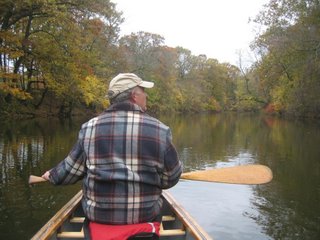 Photo of a friend on a canoe trip in early October.

I really didn't read much this week. It’s been hectic seven days. I've had meetings most evenings. My co-worker from India left for his homeland and I spent a day getting him off from the Detroit airport. It was wonderful having him here and exchanging ideas and hopefully things will go well for me to spent time with him in Jabalpur M.P. late next year or early in 2008.

One of the more interesting things I read was in the travel sections of today’s paper. It seems that Fairfield, Iowa is quite the place for New Agers to travel. I would not have normally read this except that one of my regular readers is from Fairfield and I wanted to see if he was quoted in the article (I thought there was a good chance since there's not that many people in Fairfield, but his “om” must have been drowned out by all the rest of the folks there). On the same page was another article about Mormons visiting historical sites in Nauvoo, IL. I was left wondering if this week’s travel section had been sponsored by a travel agency specializing in cults and sects with roots in the Midwest. Now that I’ve made disparaging comments about the descendents of Joe Smith and the practitioners of TM, I better get to my quotes before I make anyone else mad. Besides, I got to make some potato and ham soup for dinner.
---------

Everyone is willing to garland my photos and statues. But nobody wants to follow my advice.
-Gandhi, as quoted by Collins and Lapierre, Freedom at Midnight

Right is something you do without looking over your shoulder to see if anyone else is doing it.”
-Calvin Miller, Fred ‘n’ Erma

Ah, God! what trances of torments does that man endure who is consumed with one unachieved revengeful desire. He sleeps with clenched hands; and wakes with his own bloody nails in his palms.
-Herman Melville, Moby Dick

Mom had devised a torture with which she tormented only me but her other pupils as well. Each day after the noon recess, she would read aloud to us for exactly fifteen minutes. Somehow she managed to end each reaching right at a climactic moment. We would beg her to continue, but she would only chuckle evilly and order us back to work.
-Patrick McManus, The Deer on a Bicycle (he's telling why it was necessary for him to learn to read so early in life)

I just had to trust the Lord and a fast outfield
-Robert Traver, On Fishing

Southerners, like cats, are born with an exaggerated sense of place.
Nan Graham, Turn South a the Next Magnolia

After much conversation and negotiation, it was concluded that since this young man was also a Democrat and a Presbyterian, those qualities offset the unfortunate aspects of being a forester and a Yankee.
Nan Graham, Turn South at the Next Magnolia (on telling of her father’s acceptance into her mother’s family)

Keillor: "All you are going to do is make promise that you can’t keep."
Rusty, "Well, that’s what love is all about."
-from Lives of the Cowboys, A Prairie Home Companion on NPR
Posted by sage at 5:10 PM