Weekly quotes from Sage's reading and a photo 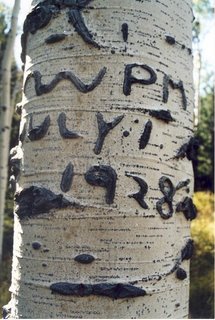 I shot this photo of carvings on an aspen tree in a grove overlooking the entrance to Ashdown Gorge. Notice the date! Click here to read about my hike in this area.

“You have no idea how tiring it is to be a goddess.”
-Indira Gandhi, as quoted by Bruce Chatwin in What Am I Doing Here

“There is no point at visiting a great writer because he is incarnate in his works
-Tolstoy, as quoted in Bruce Chatwin in What Am I Doing Here

It was an act of spiritual gratitude to save what could be saved… A junior officer remarked how strange it was that the looting soldiers destroyed musical instruments first: ‘It showed me in a symbolic fashion how Mars s contrary to the Muses…
-Ernst Junger (a former German officer in Paris) as told by Bruce Chatwin in What Am I Doing Here

The landscape suddenly grew wilder… the land became what it always had been. It bristled with vitality, with the potency to heal. This was the sign I’d been stalking.
-Doug Peacock, Walking It Off

There remains the unavoidable price to be paid for discovering that all things are indeed permitted. Beyond this door lie dread as well as knowledge, partially compensated by the closing of other pathways, which could have led to the kind of existence you might, when younger, have imagined lay in store for you. That part of life is hacked off alike a finger or an ear. You mourn the loss but never really try to get it back.
-Doug Peacock, Walking It Off

I’m only one voice in all of this. There are many others. What I have written I have written to start a conversation. I don’t have the final word.
Wendell Berry quoted by Ragan Sutterfield. “Imaging a different way to live” Christianity Today, November 2006

There is nothing like a rod or reel or stream to make a liar out of anybody, or a hypocrite.
-John McPhee, The Founding Fish

If he (Cotton Mather) wasn’t the first American to tell exergvant and mendacious fish stories, he missed the honor by narrow margin. In 1712, Mather wrote “The Fisherman Calling” a brief essay to serve the great interest of religion among our fishermen and to set before them the call of their Savior where they should be sensible at their fisheries. He told of 30 ocean fisherman who after being frustrated by foul weather, went fishing on a day that had previously reserved for the exercise of religion and caught five others fisherman did not join them but tarried to worship Jesus Christ. The 30 who went away with all their craft could catch but four fish, the five who tarried caught 500.
-John McPhee, The Founding Fish. McPhee goes on to say that after falling out of a canoe while fishing, Mather began to preach against the sport.

For sinful as he is, Jonah does not weep and wail for direct deliverance. He feels that his dreadful punishment is just. He leaves all his deliverance to God, contenting himself with this, that spite of all his pains and pangs, he will still look towards His holy temple. And here, shipmates, is true and faithful repentance; not clamorous for pardon, but grateful for punishment.
-Herman Melville, Moby Dick

I was a good Christian; born and bred in the bosom of the infallible Presbyterian Church. How then could I unite with this wild idolator in worshipping his piece of wood? But what is worship? thought I. Do you suppose now, Ishmael, that the magnanimous God of heaven and earth - pagans and all included - can possibly be jealous of an insignificant bit of black wood? Impossible! But what is worship? - to do the will of God - that is worship. And what is the will of God? - to do to my fellow man what I would have my fellow man to do to me - that is the will of God.
-Herman Melville, Moby Dick

Sage's note: I listened to The Founding Fish on my Ipod and now am listening to Moby Dick. I was relieved to find a searchable online version of Moby Dick from where I can get my quotes rather than trying to write them down from audio--which is hard when you're working out at the gym or raking leaves.
Posted by sage at 6:30 PM