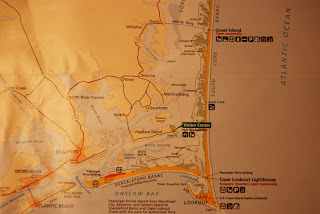 I haven’t been online much since getting to North Carolina late last week. I hope to catch up with you all later, but it’ll probably be after I get back home. Here’s the story of the first part of my trip.
Friday was a travel day. Surprisingly and unlike my experiences with airlines this summer (in which it took longer to fly than to drive or take the train), my flights were smooth and on time. As soon as I got to Wilmington, I dropped off my excess luggage at my parents home, had a quick lunch with my brother and mom, then headed north to Harker’s Island where I met my dad. He ferried me over in his boat to the fish camp on Cape Lookout. He, along with my uncle and my uncle’s brother-in-law, had gone over early that morning to set up camp. As I got to the marina, the moon rose. It was a day before full and had a ghostly appearance as it climbed above the horizon, partly veiled behind high level clouds. As the sun was setting, we quickly stowed my gear in the boat and I pulled on hip boots and a rain jacket for the rough trip across the Back Sound and through Barden Inlet, to Cape Lookout. The ride was choppy but as we were running with the wind, it wasn’t nearly as bad as he had been for my dad when he came across to get me. We got to camp about the time dinner was fixed. After eating, I headed out to the beach. The moon was now high, its light shimmering across the water. After walking on the beach a ways, I came back, had a nightcap, and then went to bed early. 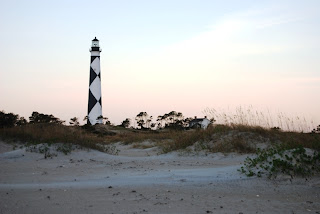 The next morning, the wind was blowing even harder than the night before. The marine weather forecast called for winds 20-30 knots for the next two days, with rain moving in Saturday night. That morning, my dad and I tried a bit of surf fishing, but the wind, blowing straight out of the north and parallel to the surf, made it impossible to keep a line in the water. We tried plugging, but after about an hour with no luck, we gave up. I hiked around, looking at and photographing the lighthouse. I already have a collection of photos of this lighthouse (which you’ve seen if you’ve read this blog for any time), but what’s wrong with a few dozen more? 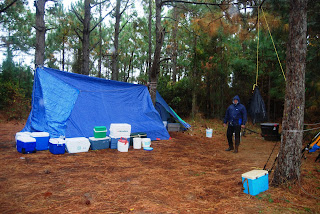 After lunch, we decided to try fishing along the leeward side of Shackleford Banks, another deserted barrier island inhabited by wild ponies. As Shackleford runs east to west, we stayed in close to the shoreline where we avoided the rough water and was somewhat protected by the wind. The four of us in two boats spent three hours fishing, catching enough Bluefish for dinner. Clouds were rolling in as we worked our way across Lookout Blight, back to the camp. Clouds shrouded that evening’s sunset and moonrise. As the rain began, we huddled under tarps and told stories and drank whiskey till bedtime. 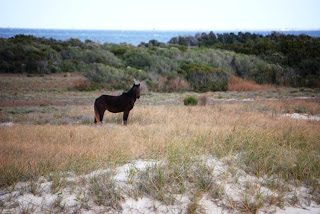 It was raining even harder Sunday morning, but I went fishing anyway (I’ll write more about that later). Sunday afternoon, after a long bumpy boat ride, I changed into dry clothes and headed to Wilmington to relieve my brother who was taking care of our mom. 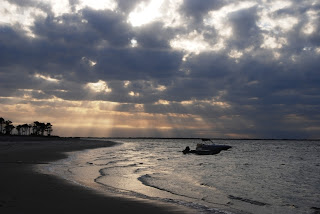