Every week Bone has a 3-Word Wednesday writing assignment. The goal is to write something using his three assigned words. Lately, every week, I've lost a two letter grades by turning in my work on Friday! This week, our words are: icy, pause, and train. I tried to recreate a train ride from North Carolina to Pittsburgh, back when I was in grad school. The photo was taken from the third floor apartment, looking east. Enjoy (I may have to come back and proof this better!). 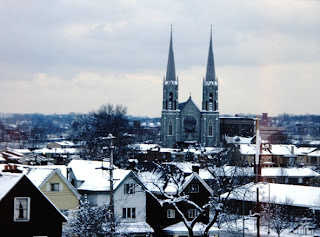 Soon after getting checked in by the conductor and shortly after pulling out of the DC Station, I headed to the lounge car for a beer and a sandwich for dinner. In a corner booth, a card game was being played by several obnoxious guys who were already intoxicated. I sat down at the only open seat, at a table where the conductor was doing some paper work. We exchanged greetings and he went back to his work and I began eating and looking out the window, watching the dropped crossing gates and the city fly by. Leaving DC, the tracks snaked along the Potomac. The icy winter mix that we’d been experiencing all day had changed to big snowy flakes by the time we reached Harper’s Ferry. After finishing my sandwich, I pulled out my book and began to read the few pages I had left, all while downing another beer.

The guys in the poker table in the corner kept hollering and then one of them told a racist joke. The car attendant came over and told them they’d been inappropriate and needed to return to their seats. When they asked for another beer to take with them, he refused, saying they’d had enough. The game broke up and all but one walked away. He got louder, shouting obscenities and racial slurs. The conductor immediately stood up, supporting the attendant and calling the calling on his radio for the other conductor to the car. I wondered if I was going to witness my first mobile bar fight, as the three men, the drunkard on one side, the conductor and attendant on the other, appeared to be locked in a stand-off, waiting for someone to blink. The man was told again that had better go back to his seat or he’d be removed from the train. He refused and sat back down in defiance. I’m not sure who made the call, perhaps the other conductor who stood in the back of the car. A few minutes later, at a lonely rural road, the train came to a stop by the dropped crossings bars of a rural road. Next to the crossing bar was a police cruiser, its spinning lights cutting through the night. The attendant opened the door and two sheriff deputies entered the car, spoke briefly to the conductor, and then to the man’s amazement, told him he was under arrest, cuffed him and led him away. The conductor made a call from his radio, the whistle blew, and the train jerked forward. From then on the ride was quiet.

The day, cold and gray, had started early as I’d boarded the Silver Star in Southern Pines. I’d spent New Years Eve with my grandma, barely making it till midnight, going to bed as soon as Dick Clark finished clicking off the seconds of 1986 at Times Square. Boarding the train, I was seated in a coach that I soon learned had a malfunctioning heating unit. Everyone was cold and the attendant had given out every blanket he had. I pulled my sleeping bag from my backpack and sat down, sliding my legs into it. My eyes alternating from the barren winter landscape outside to the pages of the Bridge over the River Kwai. In Raleigh they tried to fix the heating unit, and again in Petersburg, but in both cases, as soon as we were running, the unit kicked out. The train, having been filled with folks heading home for the holidays, had no seats in the other cars. That afternoon, I napped, warm in my bag, as the sleet and freezing rain began to pound against the window. There wasn’t a second to pause when we to Washington. We were late and had to immediately board the Capitol Limited for its run toward Chicago. Winded, I was at least pleased to find a warm coach, one whose heating system worked.

After my light dinner and the evening entertainment, I’d returned to my seat. The train crossed over the Appalachians and began the downhill dart through coal towns nestled along the Youghiogheny. The snow piled up. When we stopped at the little hamlets, folks getting off the train would leave footprints in the powder as they head toward the station or awaiting cars. Some looked around, as if waiting for someone who wasn’t there to greet them, a lonely feeling I thought. As the tracks approach Pittsburgh, running through the Monongahela Valley, flames could be seen coming from the few steel mills which were still operating, their red glow cutting though the darkness. A few minutes later, we pulled into Pittsburgh. As I got off, I wonder if I’ll have a ride, if Rusty has been able to make it through the snow to pick me up.

Sure enough, Rusty was waiting in the station. Pittsburgh had received nearly a foot of snow, but he was use to driving in it. The roads were vacant as we drove through town. Once we got back to the school, I dropped my bags in my apartment, pulled on my boots and headed outside. It was early in the morning, January 2nd, but I couldn’t sleep. Outside something magical happened. The dreary day had been transformed and now, at night, the snow added a cheerfulness to the air. I walked along, enjoying the left-over Christmas lights piercing the darkness. I was home.
Posted by sage at 2:09 PM