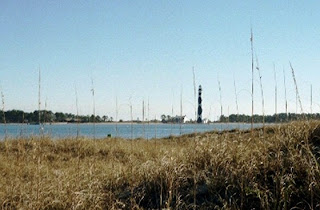 I couldn’t find a digitally saved picture of the sound near where I grew up and where oysters are raised, but this shot of Cape Lookout is of a similar terrain (with the addition of a lighthouse). The small tidal creeks in the sound are perfect breeding grounds for oysters. The second photo shows two types of oyster knives, presented on the traditional oyster shucking table cloth (that is if you don't have a table built just for the purpose, out of tin roofing).

My mouth began to water for a juicy oyster after reading about having ‘em on the half-shell in a restaurant review by Kelly the Culinarian in her blog. Kelly had stopped by my blog yesterday and so I returned the favor and was reminded that by this time next week, I may be enjoying some good Carolina oysters. I just hope the weather has been cool enough for the season to open. The idea of eating oysters in the months in where there is an “r” (September-April) appears to be a thing of the past, perhaps another example of global warming. You want the water to be cold enough to deter bacteria before you indulge in the delicacy. Growing up where I did, oysters were a stable. We always had oyster stuffing at Thanksgiving and Christmas and New Year’s Eve just wasn’t right without steaming a bushel. One New Year’s Eve, when I was living in Western North Carolina, I’d come home from Christmas with a bushel of oysters for a New Year’s Eve party. We were eating steamed oysters outdoors; the party was at my uncles. I almost broke a tooth when I bit into a beautiful black pearl. At the time, I thought that if anything came out of the date I had for the evening, I’d have the pearl made into a necklaces. Well, there wasn’t any spark there, and soon we were dating other people although we remained friends, which was a good thing according to my uncle who wasn’t sure what to make of the lady who could eat as many oysters as us guys (normally the women-folk stayed inside while the guys when outside to steam oysters and washed them down with some sort of alcohol). I’m not sure whatever became of my pearl. 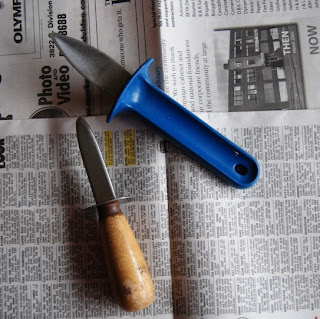 I’ve even eaten my share of oysters raw, including times when harvesting ‘em, I’d take a nice oyster, swirl it around in the water to wash off the mud, then pop it open with an oyster knife and enjoy. That said, being landlocked like I am now, mine’s one of the few homes in the Upper Midwest to boast a set of oyster knives. With that in mind, let me share with you a story that may cure your desire ever to eat a raw oyster.

I was at a conference down in Florida when I was working with the Boy Scouts. One evening, another guy and I had gone out to a bar. It was a nice place that had a patio built out over a lake, somewhere north of Gainesville. I don’t even remember the name of the guy I was with, but he was from East Tennessee. Seeing they had oysters on the half-shell, he confessed he’d never tried them. I ordered a dozen and told him I’d share, that he should have the experience. The waitress brought out the platter, oysters nicely presented on ice, with sliced lemons and some horseradish in a dish in the center. The first one, I slurped down, without any condiments. Then I showed how he could put horseradish or lemon juice or hot sauce on the mussel, before eating. After I’d consumed about half the platter, he decided he’d try one. He popped the oyster in his mouth, started gagging, and immediately spit it back into the shell. I encouraged him to try again and he did, pulling enough horseradish on it to clean not only sinuses but also a clogged drain. He then chased it with a beer, forcing it down. “That’s enough,” he said, “I can now say that I’ve eaten an oyster.” I went on to eat the rest, leaving the one partly consumed oyster sitting on the tray.

In the bar were others who were attending the same conference, including one of our colleagues, a first-class jerk. I think he was from New Jersey. I may be wrong but with his manners, he couldn’t have been a native southerner. For those of us who sat in the back, this guy became the blunt of all our jokes. He knew everything, or so he thought. He continually vied with the instructor to teach the course and we joked about why, if he was so damn smart, he was even in our class. Needless to say, I wasn’t exactly happy that evening when he walked over to our table and greeted us like we were his long lost friends. Standing by our table, we didn't offer him a seat, he spied the one lone (regurgitated) oyster. Without asking and before we could say anything, he reached for it as he proclaimed his love for shellfish. Then, in one motion, he slurped it down. We burst into laugher and right then, I knew there is a God and that sometimes we do get to experience justice here on earth.
Posted by sage at 10:14 AM