Hampton Plantation (and an Irma update)

The last week has been crazy.  A week ago, Hurricane Irma seemed to have us in her sights.  The whole coastal area of Georgia went under mandatory evacuation on Saturday.  They later rescinded the evacuation for all but the islands (I live on one of those islands) but by then I was half way across the state.  I left Saturday and came back home to a messy yard on Tuesday.  Thankfully, I only have a lot of clean up.  Although there was a lot more flooding this year than from last year’s hurricane, there were only a few trees down (last year somewhere between 10,000 and 12,000 trees were down just on his island).  I had written his before the quick evacuation and never had time to post it.
____

On my way back from North Carolina a couple of weeks ago, I took the long way down US 17.  Actually, this route is a bit shorter in miles, but takes a lot more time.  It’s not interstate and you get the pleasure of going through many towns and seeing different sights.  I took this route in order to make a slight detour to visit Hampton Plantation. As I wrote about in a recent review, I have discovered the writings of Archibald Rutledge.  He was born at Hampton in the 19th Century and the last person to live on the plantation.  Having grown up at Hampton, he later inherited the home. After a teaching career in Pennsylvania, he moved back to the plantation in the 1930s and spent the rest of his life restoring it as he devoted the remaining decades of his life to writing.  Shortly afterwards moving back South, he was honored with the title of the South Carolina poet laureate, a title he held till his death in 1973.  In 1970, Rutledge sound the plantation to the South Carolina.


It was a hot day and I was sweaty after just walking from my car to the ranger’s office.  It was about 1 PM and I learned there would be a tour of the house at 2 PM.  I signed up and then back to my car where I liberally applied insect repellent before walking through an interpretative area about the slaves who used to work the rice fields around Hampton Plantation.  Some of the dikes are still in place as well as some of the water controls that worked with the tides to flood the fields with fresh water.  The markers make it clear that the ones who were to credit with the wealth of the families who lived in the plantation were the slaves.  I also walked down to where Rutledge’s grace is located.

Hampton Plantation had a long history, going back into the pre-Revolutionary War days.  The early residents (ancestors of Archibald) were Horrys (Horry County is where Myrtle Beach is located) and  Pinckneys (that family also owned a plantation that is now a wildlife refuge near Hilton Head).  As friends of George Washington, he stayed here on his Presidential Southern Tour.  Supposedly,   Horry wanted to chop down a large live oak that blocked his view of his horses, but George having become a tree hugger after that cherry tree incident of his youth, pleaded for him to keep the tree.  The “Washington Tree” still stands and is huge.  Up in between some branches, there is a bell that dates back to the early 19th Century and was used to call folks to the dinner table or assemble people when there was danger. 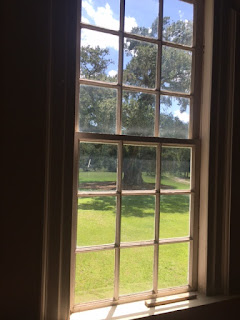 During the tour of the house, we were told stories about where Francis Marion (the Swamp Fox) was sitting when a contingent of Red Coats came riding up.  There was a trap down downstairs and the Swamp Fox was able to go out the back and hide in the swamp.  The plantation had a lovely ball room that covered the eastern side of the house.  When talking with the guide about life at the plantation during the summer, the ranger quickly reminded us that the owners never stuck around during the summer.  Rutledge would head up into the North Carolina Mountains during the summers he spent there.  Later in his life, he spent his summers a waterfront house in McClellandville.  I wonder how his lovely portrayals of Hampton might have changed if he spent his summers there working in the rice fields?

Another interesting thing in the house was a crack in the chimney and wall in the ball room.  This all came from the 1886 earthquake.  This 7.3 quake brought much damage and death to Charleston, SC.

Visiting Hampton was a nice way to divide my drive into parts and allowed me to stretch my legs as I got to see things that helped me better appreciate the writings of Ruthledge.  Click for my review of Rutledge's  God's Children.   John Lane in his paddle along the Santee (Hampton is located a few miles from the Santee on a creek that flows into the larger river), also refers to the Hampton and Rutledge.