I’m pretty tired tonight after paddling from Delegal Creek to Ossabaw Island and back.  Five of us started out on the trip, leaving the marina at 8:45 AM.  Our first stop was Raccoon Key.  Last night, when I checked the weather, we were to expect a mild 8 knot wind from the southwest, but by the time we left the creek and headed across the mouth of the Little Ogeechee as it flows out into Ossabaw Sound, we were in some rough water.  The wind had moved to the east and was blowing strong.  As the tide was running out, the wind pushed up waves that were close together and choppy.  One wave hit me broadside and had it not been for the sprayskirt, my boat would have been filled with water.  After we arrived on Raccoon Key, I checked the wind and found it blowing as high as 14 knots.


Once we made Raccoon Key, three of the group decided not to go any further, but Gary and I decided we were still game. As it turned out, the tide was lower than we had realized and we were pushed way out around a sandbar than runs from the key all the way out into the ocean, separating the waters from the Little Ogeechee and the Ogeechee Rivers.  We found ourselves having to walk our kayaks and at one point, where the bar was pretty narrow, we hauled our boats across.  The wave/tide action was still strong as we crossed the Ogeechee and the waves even larger than before, but the troughs wider and the ride a lot smoother.  We assumed that when the tide turned and started going in, with the off shore wind, it would calm down.   We made Ossabaw Island with no problems, arriving a little after 11 AM.  We walked out toward Bradley Point and then down the beach a ways, then had lunch, walked back to our boats, talked and sunned until 2:30.  It was then time to start back.

From the north shore of Ossabaw, we could see a line of breakers on the other side of Ogeechee River, running from the Raccoon Key out into the ocean. So much for the tide change calming the waters.  What had been a sandbar was now shoals.  We decided to check it out, hoping we could find a deep enough place to cross the line without too many waves.  There didn’t appear to be any and before I knew it, a wave caught my boat and I was surfing fast, heading northwest, into the melee of breakers.  As soon as my ride was over a wave from the northeast broke over my boat.  I was soaked, from my hat down.  I immediately turned the boat into the direction of the waves and began to paddle hard.  Gary was right behind me.  We paddled hard until we got out of the breakers on the other side.  Waves were crashing on the sandbar, but thankfully the bar wasn’t exposed so we were able to make it over it, a little wet and with our hearts pumping in excitement. 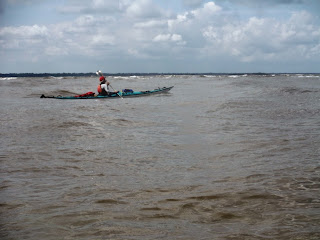 We could see another line of breakers ahead and ten minutes later, we were in the same predicament.  Again, I had a wave break over me, soaking my hat and shirt.  Thankfully, the sprayskirt kept the water out of the boat.  Sadly, I never got photos of the two of us in these lines of waves as it was all I could do to keep my boat upright and moving through the waves.  Several times I was afraid I’d have to do an Eskimo roll and hoping I could execute the maneuver successful as I did not want to come out of my boat this far from shore.  Thankfully, I never had to try as the boat stayed upright.   After the second set of waves, we found outside in still choppy water and way off Raccoon Key.  We were fairly close to the south end of Wassaw Island.  We turned westward and began to paddle toward Delegal Creek.  There was one more set of choppy waves (where I was able to get a nice photo of Gary navigating the waves, but sadly these waves were nothing like the others we’d already navigated.
Our last obstacle was making the mouth of Delegal Creek.  We were paddling slowly as we talked and passed the first red buoy for the creek (it was on our right).  We the current was moving us along nicely and as we got deep into a conversation about our experiences on the shoals, we noticed that we were no longer being carried into the creek but into another channel between the creek and the Little Ogeechee River.  We had to paddle hard against the tide.  Once we were in the creek, the tide was strong and we did little paddling, just enough to keep straight.  When we passed the Osprey nest on the channel marker (which I’d seen them building in March), we were treated with a young Osprey who, after making some clicking sounds, took to flight.  We were back at the marina a little after 4 PM, in time to have a beer and congratulate ourselves for a wonderful day.