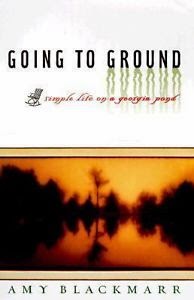 This is another book I've read in an attempt to better appreciate my new natural surroundings in South Georgia.

At the age of 33, Blackmarr leaves Kansas and returned to her native state of Georgia, settling in to her Grandfather’s old fishing cabin. She doesn’t give a lot of reasons for her retreat (but does drop hints such as tired of being inside an office and three ex-husbands).  Instead of reminiscing her past (which sounds colorful), she focuses on the presence, with attention to detail.  She is especially aware of the natural world in a manner that reminded me of Annie Dillard’s Pilgrim at Tinker Creek.  At first, she seems to be a little unsteady (calling on her distant neighbor to dispatch a snake or to ask about alligators.  In time, she gains confidence and learns to depend on the kindness of others and the comfort of her dogs, Queenie and Max.

Many of Blackmarr’s stories are humorous.  When she sees a snake that she fears to be the poisonous copperhead, a real threat to her dogs, she fetches her trusty pistol but is unable to hit it.  She calls her neighbor who sends over his son with another pistol, but he also misses and returns home to fetch a shotgun and comes back and “dispatches” the snake.  Afterwards, her neighbor looks at the snake and she is horrified to learn that it was a harmless corn snake. (44-45)  She also has a humorous battle with mice in the cabin.  The battle reaches a climax when she has a close encounter with one of the beady eyed beast.  “Across my forehead went that mouse.  Flushed me up out of the cover like quail and I made a beeline for the broom”  (81)  After being unable to wipe out the mice population, she finally causes a truce.   In her stories, she appears to gain an acceptance of the natural world.  In the beginning, she seems determined to dominate the natural, in a way that’s not exactly politically correct (she does have a pistol for protection and seems too trigger-happy when it comes to threatening wildlife).  Surely, the natural world is violent, as those at the top eat those at the bottom, but in time Blackmarr also learns it is world that can be appreciated without a knee-jerk need to dominate.
Blackmarr prose creates pastoral images:   “I was sitting on the steps with my coffee this morning, watching the pond water ripple under the breeze, and I was wondering where the golden cord is that ties this land to me,” she writes. (97)   She describes the Milky Way as “a lightened path through an obsidian sky”  (32)When musing about ownership (she didn’t own the cabin) and time, she pens: “Sometimes I sit out in the yard in one of those yellow lawn chairs with the frayed bottoms and watch the light move across the pond.” (167)   Sprinkled into her descriptions are quotes from a well-read life:  Samuel Taylor Coleridge, Thomas Merton, Henry David Thoreau, Robert Heinlein, John Keats, and Scripture (to name a few).

As she becomes more secure in her life by the pond, she also learns to accept the generosity of strangers.  Realizing that she has left her wallet at home and is out of gas, she presents her dilemma to two small town police officers.  Needing only a dollar of gas (this was in the  90s), one officer gives her a couple of bills and the other gives her a few more and says to use it to get herself some lunch.  (139f)

There are several back-stories of which we're only provided glimpses.  Blackmarr mostly focuses on her relationship with nature, but in the stories we read about her weekly visits to her grandmother who is in a long-term care facility and her teaching at a community college.  Her grandmother owns the property and after her death, the family sells it.  Blackmarr finds she must move on and heads to the mountains of Georgia (the source of another book).
Toward the end of her time at the cabin, her dog, Queenie, gets out beyond the fence is hit by a car and is buried on the property.  The story is sad, but it does provide Blackmarr with a permanent tie to the land that she (and her family) no longer own.   I recommend this book.  It was a treat to read and I look forward to reading other books by Blackmarr.

“Solitude is an easy companion.  It doesn’t require much from me except the ability to be comfortable alone.”  (31)
Posted by sage at 8:31 AM