Talking about the weather a few other things with some photos added for good measure...

The weather has been near perfect the past few days.  After already having a week of hot weather (well over 90 degrees F) with high humidity, the highs have only been in the low eighties.  The humid is still high, but not at the 90% range, and the wind has provided a steady breeze.  The trees are most lovely when their tops sway in a 15-20 knot wind.  It is warm enough that the sand gnats are not a problem and windy enough that mosquitoes and other biting flies are grounded.  At night, it cools off and with the moon still in an early stage of waxing, the summer constellations are out.  We have had some purely magical sunsets.  Several days ago, I was leaving the island right after the sunset and while crossing the causeway, the marsh was all golden pink color.  As I was driving and in a hurry (and without a camera), I didn’t have time to find a place to pull over and snap a photo, but it look liked something Pat Conroy would describe.  Last night, while walking the dog, I took a photo of the sunset from my iphone, (which has a pretty nice camera for a phone).


I have been sailing almost once a week.  The sail club regularly mixes up teams and boats (there are nine Rhodes 19 boats).  Some of the boats are better than others (especially since about half the boats have newer sails).  It seems that the boats I’ve been on recently have all been ones with older sails that have lost their crispness.  It is a little frustrating when on a beat and you are always tailing a boat that can point higher than you, but there is some satisfaction about giving them a run for their money.   Besides, there is pleasure just being on the water. 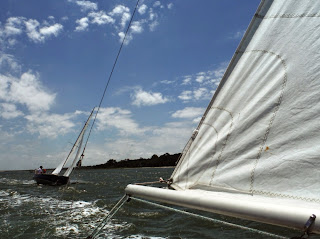 I am in the second phase of my training as a volunteer fireman.  As I noted a few months ago, I became a basic fireman in February and am now studying and practicing to become a panel operator.  This will allow me to drive and operate the trucks.  Although this position will keep me further away from the fire, it's probably good because my diabetes (with the possibilities of low blood sugars) could make me a liability to others if I was inside a building on fire.  We've not had any major fires since I've been in the department, but last week as the heat was breaking, we had several homes struck by lightning but thankfully none of them caught fire, only experiencing electrical damage.  Here is a photo of me learning to operate our ladder truck.  I still get kicks from heights!

Enjoy a few more photos of Saturday's sail…  In this race I snapped the shots, I wasn't on the helm or jib and we were not flying a spinnaker and my main role was to lean over the windward side to provide stability providing me time to snap a few shots. 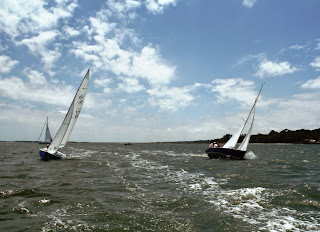 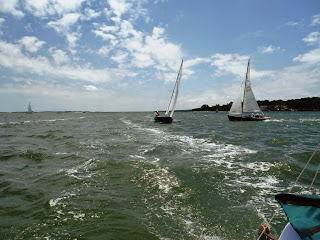