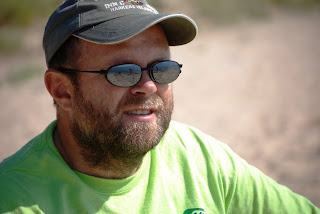 This photo was shot late in the summer on Lake Michigan… In my annual Christmas letter, I admitted I now have a few gray hairs in my beard and they seem to show up well in the photo. I just recently came across it when emptying a photo card. 2009 did fly by fast . As far as years go, 2009 was a good one. At least for a time, it seems we’ve avoided the economic apocalypse that loomed in our minds last year. Although I didn’t make any wilderness trips (only a 2 day canoe trip), I did spend a nice week in the middle of the Yucatan, took a long driving trip out West and another trip in August to the Carolina coast. I’m writing this at an airport terminal, having checked through security without having to have my drawers sniffed (read Desert Rat’s take on airline security, it‘s classic). I’m now waiting for a flight for Detroit, because that’s where you now go when you leave from here, thanks to the Delta/Northwest merger. Tomorrow morning I hope to be listening to the surf on the beautiful beaches of Southeastern North Carolina.

I didn’t have time to post yesterday and haven‘t gotten around to find a hotspot until later today. The beach is still beautiful and it’s good to be with my parents even though I once again am reminded truism from another North Carolinian, Thomas Wolfe, “you can’t go home again.” I’ll write more later and set up an auto post for tomorrow evening for “Traveling Tip Thursdays.” May you have a fun and be prosperous in the New Year. To ensure it’s prosperous, be sure to eat your greens, beans and cornbread on New Year’s Day.
Posted by sage at 5:45 PM