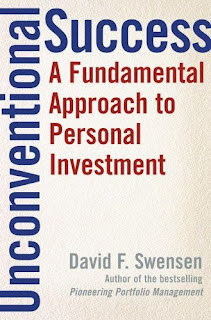 It's been a while since I've done a book review and this is a new genre for me to write a review. If you're not interested, skip down to my post about scooping poop at a dog show or the tribute I wrote for Eddie, a friend who recently passed away. Or you might want to go to the end of the review, where I talk about the political implications of his comments (in relation to Social Security). I'm at the airport while I edit this, waiting for the first leg of a light to take to the Old North State. Catch up with you all soon.

I put off reviewing this book long enough. Sitting on a board for a private foundation, I have heard the name David Swensen mentioned over and over from our investment advisors. Swensen is the Chief Investment Officer for Yale University and has attracted the attention of the investment world for his stellar results in that position. His 2000 book, Pioneering Portfolio Management, is a classic guide for foundation portfolio management. When I learned that a revised version of Pioneering Portfolio Management was being written and scheduled to be released in early in 2009, I decided to read his book for personal investment that was published just three years ago. I started this book in mid-September, when things look shaky on the Dow but hadn’t yet gotten down-right depressing. As I read, the market started to react erratic and I, along with everyone else, saw investments drop like lead sinkers. I’ve wondered what Swensen would say about the current turmoil in the market, but I feel he would stand by much of what he’s written.

Unconventional Success is not an “investment how-to book.” There are no “stock tips” here, only warnings. There’s no discussion on building a portfolio or any of those silly charts as to what might happen if we place a hypothetical $100 a month into investments for 40 years. Instead, Swensen takes a more academic approach. The first two parts of the book (roughly the first half) deals with investment theory. Swensen covers asset allocation and market timing. This section was well written and explores the various options for investing and provides a good introduction into the various forms of securities available. Swensen, like most investment gurus, is in favor of well diversified portfolios, where each asset class is large enough to matter but small enough that it mitigates risk. He illustrates a well diversified portfolio with the following targets:

Swensen prefers bonds back by the federal government and stays away from corporate bonds and foreign debt. Corporate paper limits one’s potential gain. If interest rates fall, corporations can refinance, calling the higher interest bonds and reissuing lower interest bonds, if rates rise, you’re stuck with a lower interest rates. Foreign debt is often risky, especially in countries where the government is shaky. Swensen splits his fixed assets between regular treasury bonds and Tips (Inflation protected bonds). There are some REITS (real estate investment trusts) that he likes for real estate investment component, but he’s also critical of many of them due to their fee structures. He sees REITS as long-term investments (and certainly those who have invested in REITS several years ago will have to take a real long term outlook before they can recoup their investment).

Swensen also sees stocks as a long term investment, although he warns not to be too sentimental over particular companies that you want sell when you need to rebalance. He realizes that most individuals have a hard time investing in individual companies. Traditionally, the rule has been it takes at least 30 different stocks, diversified in various sectors of the economy, to reduce risk. Swensen suggests it may even require 50 different stocks and agrees that the average individual doesn’t have time to make such selections. The alternative, the Mutual Fund Industry, is also flawed and Swensen attacks the industry throughout this book. He’s especially hard on mutual funds that are publically held, seeing a conflict of interest between the fund’s shareholders and the fund’s investors. He examines the various fee structures for funds and is critical of the ways they’ve developed hidden fees to transfer value from the investor to the fund managers and owners. He explores taxes on mutual funds and how when someone else sells their portion of the fund, it creates tax liabilities for all the fund owners. In the whole mutual fund industry, he only identifies three funds favorably. TIAA-CREF (Teachers Insurance and Annuity Association and College Retirement Equities Fund) is a non-profit fund set up for educators. Swensen does admit a conflict of interest with his approval of TIAA-CREF (he’s on their board). He has mostly favorable things to say about Vanguard Funds (it's non-profit) and a Longleaf Partners, a small fund that's mostly closed to new investors. Over all, Swensen prefers index funds (lower fees and lower turn-over of stocks which means less taxes). He also suggests there are some benefits for ETFS (Exchange Traded Funds), but admits that there is already signs of companies marketing EFTS with unfair fee structures.

Swensen warns against the practice of active management funds which try to beat the market, acknowledging that for every win, someone has to lose. Instead of trying to beat the market, he advocates maintaining a close what on ones asset allocations and frequently rebalancing. Yale’s foundation rebalances daily (which he admits is not possible for the individual investor). If the equity market rises, they sell and move it into fixed income. If the markets are down, they bring more money into equities. Such a strategy has enabled Yale to comfortably out perform the market in the long run, while avoiding the extreme highs and lows.

This book has political implication. He suggests that schemes like privatizing social security would be a windfall for the mutual fund industry and would not serve the individual investor. This industry has already received a windfall in most companies shifting from a defined pension plan to a self-directed plan, such as with the 401/403 programs. As an investment guru, he is highly attuned to investment schemes where the fund’s interest is not always aligned with the investor (such as mutual fund companies wooing companies for 401 accounts). Furthermore, he’s also critical of companies like Morningstar, that’s supposed to provide non-biased ratings of funds but often fail to serve the public. (Although he doesn’t address this, this critique seems right on in our recent market turmoil, where bonds had high ratings but were stuffed with subprime mortgages).

I don’t recommend this book if you are looking to start investing. But if you want a deeper understanding of the investment industry, I would recommend this book. He seems to go overboard selling the idea that he mutual fund industry fails to serve the individual investor. Reading all the details of tax implications (which if you’re in an IRA or 401/403 you don’t have to worry about) and of fees (which gets us all), is tiring, but also enlightening. I look forward to reading his updated Pioneer Portfolio Management when it comes out in January.
Posted by sage at 11:00 PM