Another week, another bailout and other news 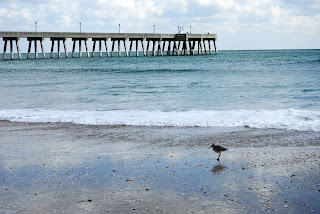 We wake up this morning to find another huge amount of money going to shore up Citibank. 25 billion here, a 100 billion there, hundred of billions of guarantees elsewhere! Why do these crises always seem to occur and supposedly get resolved over the weekend? I remember from a history class of long ago that in the late 30s, Hitler did many of his actions, such as invading countries and breaking arm treaties, on Friday afternoon. He knew that by then, members of the English parliament would have all retreated to country houses. By the time they could reconvene and address the situation, they’d be reacting to “old news.” I know they are saying they need to have these bailouts in place before the markets open, but I wonder sometimes if it’s easier to pull the wool over our eyes on the weekend.

It snowed today and that makes me happy! It’s a big difference from a week ago when I was enjoying warm weather on the Carolina coast. The picture is of the new Johnny Mercer’s pier on Wrightsville Beach. The old Johnny Mercer’s Pier was like the Kure Beach one, with wooden pylons. Every time a storm came through, a bit more of the pier was washed away… This one is built of concrete and is said to be capable of handling a 200 mph hurricane. We'll see.

I woke at 1:27 AM this morning in the middle of a terrifying dream. Although I often dream and even write about them, and some of them are really weird, as a general rule they're not nightmares. This one was an exception. The dream started out pleasant enough. I was going home, but someone warned me of a voodoo threat for the bridges I'd have to cross. I laughed it off and headed toward my truck, when I found myself attacked by something I couldn't see but could feel it compress around me and I fell down screaming in pain and praying for deliverance. It took me while to get back to sleep. Any of you folks doing voodoo on me?

I’m working on some more memoirs that I hope to start postings by midweek. I’ll need to take a break away from any Thanksgiving preparations I have to make (dinner will be at someone else’s home, so I won’t have to worry about a turkey).
Posted by sage at 11:09 AM