Vietnam: A History (A Book Review) 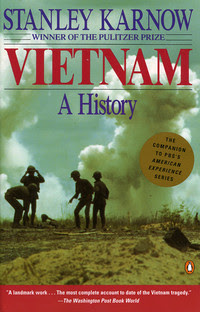 I’m not sure if Vietnam: A History was a book I should have read at this particular time in American history. Reading the book, I continually recalled sound-bites from my youth concerning the Vietnam War, reminding how little we’ve learned in the past forty years. In this way, there was plenty in the book to depress me. But it’s also enlightening. Yes, there are many differences between Vietnam and Iraq. We never really “invaded” Vietnam; our involvement in the country started out slow, but grew until we found ourselves in a full scale war. But there are also many similarities, especially in the logic that is used to counter calls to pull our troops out and the refusal of the Johnson to call upon sacrifices of the America people, suggesting we could maintain the war while implementing the president’s domestic agenda. Reading this does give cause of concern for the future as Karnow reminds us of the disastrous policies of Johnson’s “guns and butter” economy had on the nation in the mid to late 70s.

Stanley Karnow spent much of his career covering Vietnam and was uniquely prepared for writing this book. He was there in the early 50s, when the French were still in power; he was there through the United State era and in the final years of the war. In the early 80s, he traveled back to Vietnam, seeking and being granted interviews with key leaders from North Vietnam and the Vietcong, allowing him to draw on perspectives from the leaders of the North, South, the Vietcong and America.

With Karnow’s background as a journalist, it should not be surprising that this book reads like a series of journalistic dispatches instead of a detailed history of the country. Since he focuses on the narrative, often telling personal stories, the book reads somewhat like a novel. I found it enjoyable (I listened to it on an ipod, but did check the book out of the library and reread certain sections). However, Karnow’s focus on narrative means there are in places chronological gaps in the history as he jumps around following the story line, at times requiring him to catch up important pieces of history later in the narrative. Although Karnow mostly focuses on Vietnam’s history since the French involvement in the 19th Century, he does provide background information to the nation’s long struggle against Chinese domination.

Vietnam: A History does not deal with all the battles of the war. There are many other fine books that deal with particular campaigns and with the soldier’s life in the jungle. Karnow focuses most on the political side of the struggle, from the scheming of South Vietnamese officers for power, to reasons behind some of the decisions being made American politicians, to the strategy of the North and the role of the Chinese and Russians. Karnow reminds his readers the role of Johnson’s struggle with those on the right within the American government played in his leading the nation into Vietnam. Not wanting to be seen as “soft” on communism, especially during the ’64 election, as well as a desire to get his Great Society and Civil Rights policies passed, forced Johnson to take a harder stand on Vietnam. Likewise, Nixon also used the war to draw attention away from his domestic problems at home, especially with the Christmas bombings of 1972. Karnow also showed positive outcome of policies such as the role Nixon’s China’s visit and the warming of relations with the Soviet Union had with us getting out of the war. In addition he provides information such as the role the Chinese Cultural Revolution played, especially in the American invasion of Cambodia.

I’m sure that much of what Karnow says in this book is offensive to someone. He shows the ugly side of the war—covering not only American atrocities, but also those committed by South Vietnamese, the North, and the Vietcong. He also gives insight into the role religion played in the war. South Vietnam had both Buddhist and Catholics who generally were at odds, but there were also some small religious groups that played important roles at particular junctures in the war. Finally, Karnow does a great job covering the corruption that existed and probably more than anything led to the downfall of the South. I recommend this book as a way of understanding the larger picture of what happened in Vietnam as well as a way to help us understand more about our current war.
For more of Sage's book reviews, click here.
Posted by sage at 7:38 PM