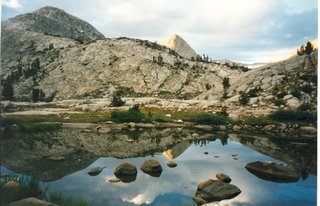 "Bear! There’s a bear behind you," Ben yelled.

"You’re kidding," I thought. We’d seen bears the night before. Our food was safely stored between trees, so they just sniffed around and moved on. It was now morning, about 7:30. Tending the stove, boiling water for oatmeal and tea, I heard something move behind me and turned. Sure enough, there was a bear looking over my shoulder as if he was checking the pot. Foregoing his nocturnal ways, this old guy found that if he waited for breakfast, he could have hikers serving him. I quickly jumped up and moved out of the way as the bear stepped into our makeshift kitchen, sniffing around the stove. I worried he might catch himself on fire or step on the stove, ruining it and doing his paw no good, but his movements were graceful. He went for the food, ripping into a bag of oatmeal and another of powder milk. He wasn’t impressed and walked down the trail to the next campsite where he ripped open a guy’s pack, pulling out his food. I was eighteen; it was the last morning of my first backpacking trip in the mountains. This close encounter with a bear was not to be my last.

Over the years I’ve seen many bears in the wilds. I expected everyone who has hiked the Appalachian Trail through the Smoky’s or the Shenandoahh’s have seen a bear. In the Smoky's, the shelters have heavy fences on the front in order to keep the bears out. You feel a little like an animal in the zoo, with the bears as sightseers, as if you’re trapped in a Far Side comic. I’ve heard stories of guys going out to relieve themselves in the middle of the night, forgetting to latch the door. When they return, they find those sharing their shelter to be extremely upset as they had to chase a bear, whose like a kid in a candy store, out of the shelter. Most bears are satisfied to grab a promising bag of food and flee. Luckily, I never had such experiences. I saw a few bears around campsites and shelters, but they were never a bother. I also get to see a few more while hiking early in the morning or late in the afternoon.

My best view of a bear along the Appalachian Trail was in New Hampshire. I was alone and heard something quickly scamper up a tree. I looked up thinking it might have been a raccoon, and was surprised to see a cub just above my head, peering down. It would have been a great photograph, but my camera was safely stored in my pack. I started to take the pack off, when it dawned on me to look around. I’m glad I did. Probably 25 feet away, in heavy brush, stood the mother, up on her hind feet. She was dead-eyeing me with a look that meant I better keep on trucking. For a while, I keep hearing things behind me that sounded like a twig breaking, but it was my mind playing tricks on me.

I’ve seen more bears in California than any other of the states and providence’s I’ve hiked or canoed. Onion Valley, a popular camping spot west of Kearsarge Pass and Independence, CA, seemed to be over populated with the beasts. As we came into the valley late in the day, we saw several bears running ahead of us along the trail. We made sure our food was safely stored, well away from where we camped. We got through dinner and after a hard day of climbing with heavy packs (we were out for 14 days), we crashed as soon as the sun went down.

I woke up about an hour before sunrise. I zipped the screen of my bivy tent open and, in the cool morning air, watched a faint pink haze on the eastern horizon replace the stars. Then I fell back asleep. A few minutes later (it couldn’t have been too long as it was still not yet light), I felt something against the back of my neck. Since there was no one sleeping in my bivy to cuddle up with me, I immediately sat up screaming. "Why am I yelling," I thought. "Was it a dream?" Then I looked around and saw a bear on all fours, slowly backing up. I look at her and shouted, "get out of here." She grunts, turns around and headed down the trail, a cub in tow. Although I don’t think I was in danger, as the bear was just sniffing around trying to find food, it’s still unnerving to be nuzzled out of bed by a beast that weighs three or four times more than me.

On another trip, in the backcountry of Yosemite National Park I head off one evening to watch the sun set from the top of a cliff a short hike from camp. Afterwards, I slowly make my way back to camp in the dark, without the aid of a flashlight. Just outside camp, I came face to face with a bear on the trail. Sensing me, the bear immediately stood up. He or she was as tall as me. I quickly moved off the trail in one direction, he took the other. As scared as I was, the bear must have been more frightened as he left one large pile of poop. For those of you who have seen the movie "Grizzly Man," let me be very clear here: I did not wax eloquently about the poop having just been inside the bear.

Also in the backcountry of Yosemite, while camping near Cathedral Lake, two bears came into our campsite about three in the morning. Our food was safely stored, way up in a tree, the bags counter-balanced in a way that it would take us ten minutes or so to retrieve them in the morning. One of the bears found where it was hanging and climbed the tree and began shaking the limb. I got up and threw a couple rocks at it, trying to chase it away when I saw the second bear looking at me. I decided that I’d go back to bed, as they didn’t appear too pleased with my interference. For fifteen minutes, Eric and I both stayed awake, our tents only 25 feet or so from the bears. We should have put the food further from camp. One bear one jumped on the branch, causing the food bags to swing back and forth. The other bear stood underneath, on hind legs, with his or her arms outreached as if in prayer, waiting for the food bags to drop. They finally gave up and left in a run. A few minutes later, we heard shooting and the banging of pots and pans from the other side of the lake.

All my bear experiences have been with black bears (even though the California bears are brown in color, they’re still black bears). I’ve hiked several times in Grizzly country, but have yet to see one in the wild. And to this day, the only time I’ve lost food to one of these beasts was on that first backpacking trip when Ben and I hosted a bear for breakfast.
Posted by sage at 2:22 PM