Flowers and an Appalachian Trail book

The flowers have been beautiful this year. The camellias are about done (I have two bushes left that are still blooming) and the azaleas are at their peak. While many of my azaleas took it hit with Hurricane Matthew dropping limbs and busting up the shrubs, they were still beautiful (even though there are gaps where they were broken up). 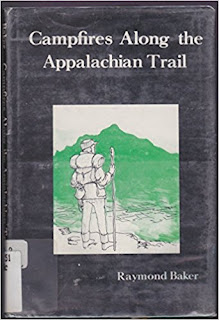 Raymond Baker, Campfires Along the Appalachian Trail (New York: Carlton Press, 1971), 120 pages including 6 pages of black and white photos and one map.

Raymond Baker retired in 1963, after running a diary for 33 years.  The following April, the 56 year old New Jersey man set off to hike the Appalachian Trail.  This book tells his story.  His niece, whom I know through church, lent me this book.  Knowing that I'd hike the trail, she thought I would enjoy it and I did.  The spring of the year always makes me long for the trail.

Baker heads out on the trail with no tent, only a ground cloth so that he could wrap his sleeping bag in when sleeping outdoors.  He often stayed in shelters.  During the spring and summer as he hiked, he was frequently met by his wife and family members for extended breaks from the trail.  He covered a lot of miles, especially since he did not carry a stove and would build fires to cook his meals.  The time to build fires would cut into the time spent hiking.  He also, apparently, didn't carry a flashlight.  I am pretty sure that flashlights of 1964 were heavier than the dual AA battery I light I carried 14 years later.

The Appalachian Trail in 1964 wasn't as popular as it was in 1987.  He only saw a few folks from the trail's beginning on Springer Mountain, Georgia to the Smoky Mountains, 160-some miles to the north.  There were not a host of folks setting out to hike the trail in 1964.  The exception, which was still happening when I hiked, were soldiers on maneuvers in the mountains of North Georgia as well as hikers in popular spots like the Smokies and White Mountains.

Like my journals, he does take notice of the wildlife, especially birds.  He loved the whippoorwill, and spoke of listening to them was better than counting sheep to fall asleep.  He once counted the bird making its high pitched cry 180 times in a row (53).  I found his fondness for such birds odd, as there were a few times that I awoke from a deep sleep when a whippoorwill started making its call just twenty or thirty feet from me. It'd scare you enough that you couldn't go back asleep for a long period.  And, I've been know thrown sticks in the direction of such birds, trying to encourage it to find another place to disturb the peace.  Another bird that had not changed their tactics during the years that spanned our hikes were the grouse.  A mother grouse would step out in front of you and run as if it had a broken wing, as it led you away from a nest.  When you were safely away from the nest, the bird would suddenly take flight and circle back around.  Baker noticed this on a number of occasions.  He didn’t seem to have a problem with bears, but wrote how he was warned over and over about snakes, but didn’t see that man dangerous ones (I saw a couple of rattlesnakes when I did the hike).

In 1964, the trail had not yet been protected as a National Scenic Trail, that forbid motorized vehicles or, as Baker referred to and complained about them, "Scooter Bikes."  That protection came in 1968.  I supposed both of us meet someone famous along the trail.  I met a Paul Laxalt, who was running for President (he dropped out early in the 1988 primaries).  Baker met William O. Douglas at Sunset Pond in New Jersey.  Douglas was a Supreme Court Justice and would later write the foreword to this book.

It was wonderful reading this book.  I recalled many of the shelters.  Thankfully, the cabin on Blood Mountain (highest point on the trail in Georgia) was in better shape when I hiked than when Baker went through.  The shelter had originally been built by the CCC in the 1930s.  However, it still wasn't critter proof as I remember lying very quietly as a skunk searched for food inside the shelter in the middle of the night.  Like Baker, I found many people very generous and willing to help as I hiked the trail.