An Afternoon in the National Gallery

After getting off at the train in Union Station, I dropped my bags at the ClubAcela Lounge after getting off the train at Union Station.  The lounge is a nice perk which is available to anyone holding a sleeping berth (as I had on my next leg) or traveling first class.  It provided a safe place to leave my bags without paying and outrageous fee.  I then caught a quick bite to eat at a Japanese fast food outlet in Union Station and headed out across Columbia Square and down toward the Capitol, upon where I turned south and along the mall to my destination, the National Gallery.  I was probably 14 or 15 years old the last time I was here, so this promised to be a treat.

By the time I arrived, I had nearly four hours to explore before they closed.  I decided to forgo the modern art section (which is in a separate building) and stick to the huge gallery that was build during the depression.   However, I did catch some modern art as their was a special exhibit on the work of Stuart Davis.  Although I didn't really recognize the name, I realized I had seen some of his work and, back in my 20s during a creative time of life, I had tried to imitate some of his abstract art which he created during his jazz period.  I still remember the piece, which I titled jazz, and gave it away an admirer some three decades ago.  While I found his work interesting, I really wanted to spend time with the the gallery's vast collection of art from the Hudson River School.  I have never tried painting with oils, but I have admired how such artist are able to capture light.  At my old age, I'll stick to the camera!


One of the photos I enjoyed was George Inness’ work, “The Lackawanna Valley,” which he painted in 1855.  Although he was influenced by the Hudson River artists, I find this painting more “open” than most of the others from that movement.  Everything is bright and the painting depicts progress.  There’s a train coming out of the valley, reminding us of the country was becoming interconnected.  And there’s a boy, sitting on the hill, watching and perhaps wondering, like those who admire the work, where all this was leading.  When it comes time for me to check out, I hope I can do it like Inness.  He was traveling in Scotland and, according to his son, watched a sunset, threw his hands in the air, and proclaimed, “My God! Oh, how beautiful!”  And then he died.

I was also amazed by the paintings of Frederic Edwin Church, also from the Hudson River school, who took his talents into the Amazon jungles in the mid-19th century.  El Rio de Lux (The River of Light) hangs in the gallery.  It is an amazing painting with so much detail.  The variety of plants and birds flourishing in the humid landscape.  Church traveled all over the world, including the arctic, making sketches.  He painted El Rio de Lux at home, in his studio, twenty years after traveling in South America, using hundreds of sketches that he’d made.

But the highlight of my time in the National Gallery came when I stepped into a room with only four large paintings.  (One of the things I like about this museum compared to others I’ve been too, especially the Hermitage in St. Petersburg, is that the walls of the National Gallery are not overcrowded.  Such spacing allows you to enjoy each painting.  This set, by Thomas Cole, I’d read about fairly extensively in a book by a latter-day Thomas Cole, titled The Journey of Life: A Cultural History of Aging in America.  I don’t think the two Thomas Cole’s are related.  One writes academic history on aging and the other explored again through his paintings. 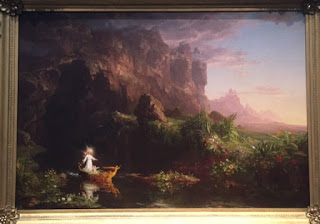 In the first painting, titled childhood, features a small child in a boat, steered by an angel, emerging from a womb-like cavern in a boat.  The sun is just about to rise over the horizon.  The painting shows the promise of a new day as the child begins his exploration of the world. 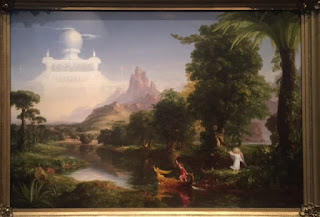 In the second, titled “Youth”, the child is older and is able to take the helm and guide the boat.  He’s dreaming big as there is a castle in the sky  The angel is still present. But she lets the boat continue was she watches from the bank.  Like the first, there is a lot of optimism and hope. 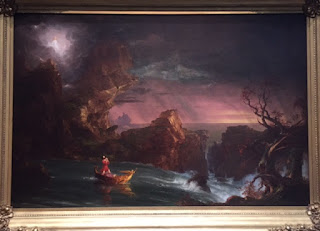 In the third painting, the colors darken and storms rage.  It is titled “Manhood.”  The man in the boat has lost his rudder and is approaching roaring rapids.  In the distance is the sea.  He prays.  There is still an angel in the painting, but she’s up in the sky, far away.  This dark view of adult life may have come from Cole’s on life, for he died young, in his forties.  This is a time of trial and the man, as depicted in the painting, is helpless. 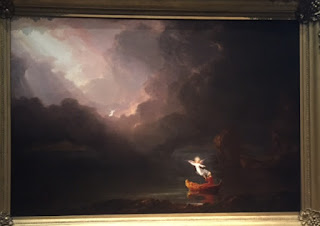 The final painting, titled “Old Age”, has the boat out on the sea as the sun sets.  The man is older and an angel is beckoning him to come.  His time is over and all is calm.  You can only see a bit of land as the boat floats out into the depths, into eternity.

Cole painted two sets of these paintings.  The first was commissioned by a man in New York state, who died before he finished.  His heirs did not want to "show" the paintings publicly, so he painted a second series from memory.  The second series hangs in the National Galley.  The first is in a museum in Utica, New York.

I spent a long time looking at each of the paintings.  I really liked them, but the more I looked and thought about them, I began to think that he had missed something important.  In the paintings, the man is always alone, except for an angel.  There are no parents to guide the infant, or a community to help the young man as he goes in search of his dream.  Nor are their peers or a spouse to help the man as an adult or to comfort the man as he ages.  Certainly Cole captures the idea of divine providence (as represented by the angels), but his paintings focus on the individual and forgets the community.  Maybe I am just cynical, but a problem in America is the cult of the individual. One of our recent candidates for President titled her book, It takes a Village to Raise a Child.  Too often we get hung up on the individual and forget that we depend on others and they on us.
The gallery closed at 5 PM. I walked back to Union Station and enjoyed the lounge as I waited for my train to Savannah. We boarded a little after 7 PM. After stowing my stuff in my roomette, I headed to dining car where I enjoyed a wonderful Flat Iron Steak dinner while talking to a guy who used to be an Amtrak police officer. He had a lot of interesting stories! Then it was time to sleep.
Posted by sage at 12:22 PM