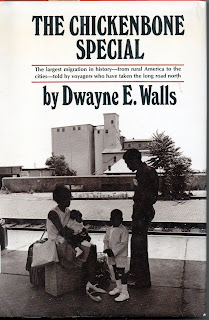 A disabled father loses a son the day after the son graduates from high school.  His son, Donnie, accepts a cash graduation gift from a sister already in New York City and buys a ticket on the afternoon train up north. His old man wonders who’ll be left to shave him.  A church is sadden by the loss of one of its promising young women when she decides to seek her fortune in Baltimore.  Yet, in gratitude for her faithfulness, they pay her what she's owed and give her a bonus to help with the transition.  Another family, with the promise of a good job and a good house in Washington DC, drives north.  Four young African-American men, having graduated from high school, take the bus to Rochester, New York.  The stories of these men and women are echoed thousands of times over again in the 20th Century as part of the great migration from the rural to the city.  In The Chickenbone Special, Walls captures the story of a few of those who made journey in the late 1960s.

There were so many young African-American youth leaving following graduation that the railroad would put on extra cars to handle all the traffic.  Most left by train (especially those going to Washington, Baltimore, Philadelphia and New York).   Those boarding had with them a ticket, a few dollars, a bag of food, and a suitcase containing their belongings.  The lines running along the East Coast, from Florida to New York, were nicknamed "Chickenbone Specials" as many of the passengers didn't have the funds to eat in the dining cars.  A favorite in their bag of vittles was a piece fried chicken, from which the train derived its nickname.

Wall captures the turmoil of the small communities losing their most promising young adults, who were lured north.  For some, the North became the Promised Land as they found jobs and decent housing and were able to provide for themselves and their families.  For others, it ended in tragedy.  Problems like unplanned pregnancies resulted in shipping back children to be cared for by grandparents.  Violent deaths resulted in bodies being shipped back.  The ghettos provided new challenges for those used to living in the country.  Some who left decided life wasn't so bad in the South and migrated back, while some of the men joined or were drafted into the military.

Walls' story is told against the backdrop of change in agriculture.  Wall's research was conducted in two areas (Kingstree SC and Warren County NC), where tobacco and cotton were the chief products.  With new machinery, it was taking fewer hands to harvest the crops.  Small farms with a minuscule tobacco allotment struggled to survive.  However, for those without the resources to buy the ticket as soon as school let out, they could stick around for the summer and pick up enough work in tobacco fields to earn their fare north after the harvest.

Wall also captures a glimpse into the networks that supported those migrating.  In the South, the church and the family provided stability for the community.  Often, those heading north had a relative who had paved the way beforehand.  These relatives would meet the new resident at the train or bus station and give them shelter while they looked for a job.   He told the story of how the African-American community grew in the Rochester area, starting with a clergy grower who early in the 20th Century recruited migrant workers from Florida to work in his fields in the north.  Overtime, many of the migrants stayed and the community grew to be quite sizable.

I recommend this book for anyone interested in African-American migration and the rural to urban flight.  However, it is not a sociological study.  Walls is a journalist and has collected stories which help the reader get a sense for the time.  For those of us who are not African-American, this book along with Melton McLaurin’s Separate Paths: Growing Up White in the Segregated South provide insight into rural South of the mid-20th Century.  Another recommendation, which focused on the rural poor white of the time, (which included many white families) at the time tenant farming was waning is Linda Flowers, Throwed Away: Failures of Progress in Eastern North Carolina.

Dwayne Walls was a reporter for the Charlotte Observer.  I learned of this book (which is long out-of-print and I picked up a used former library copy) from Phil Morgan.  Phil was a photographer at the Observer, who worked with Walls on this story.  One of Phil’s photographs (of an African-American family waiting on the train) is on the dust cover of the book.
Posted by sage at 12:26 PM