Catching Up with a Lost Friend

One of the blessings of social media and the internet is that we can reconnect with people.  Last week, I re-connected with my first photography teacher.  I was right out of college and took a class with Phil Morgan.  One of our assignments was to photograph our day.  I was working nights at the bakery and remember taking a photo of my day beginning with me making oatmeal and tea before heading into the plant at 1 A.M.  Not allowed to take a camera into the bakery, I had a shot of me in my white white uniform (I am not sure where those photos went) and another of me at my desk that morning(an "iPhone" copy is posted here).  Even though I had graduated from college, I was still taking some economic classes and maybe that's what I was working on.  I miss that curly hair! 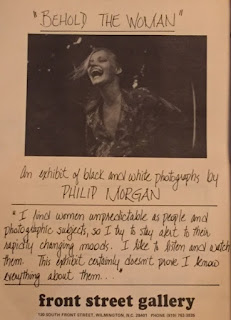 During the class, Phil and I stuck up a friendship.  At the time, his wife, Sandy, was dying of cancer.  She was the first hospice patient in Wilmington.  I remember a one person show he had shortly after her death, at St. John’s Gallery in Wilmington.   He had documented their sad journey. A few years later, he had another show titled “Behold the Woman” at the Front Street Gallery.  I was able to find the program in my old journals  (I had written notes of the exhibit on the back), Click here to see some of Phil's work.  His black and white "environmental portraits" (people in their work or living surroundings) captures the human element.  Having worked for the Charlotte Observer, Phil documented the Civil Rights movement and has a collection of photos from Appalachia before the mountains were gentrified.

Over the years, we have both moved around and lost contact.  The last time I saw Phil was before the adoption of a son or the birth of a daughter.  I was living in Utah at the time and was back visiting my parents in Wilmington during the Azalea Festival.  It’s been nearly 20 years but I hope to see and catch up with him the next time I'm back in Wilmington.

I don’t remember if it was 81 or 82, but I was going with a group of folks down the Waccamaw River.  I invited Phil. There were a half dozen canoes.  We put in at where the  river begins at the outflow of Lake Wacamaw, paddling through the cypress, hardwoods and pines of the Green Swamp.  We stopped at lunch on Crusoe Island where Dodo showed us how to carve out cypress canoes,  We also got to see the snake collection of Dodo's neighbor.  That evening, we camped along a high bank of the river, built a fire and talked late into the night.   Phil went to bed first and called me from our tent.  A mouse had invaded and was scared and pressing up against the rear trying to get away. After watching him for a moment, we backed off and the mouse took off.  The next morning, if I have the right trip in mind (I took a couple down the Waccamaw), we fixed eggs in half of oranges wrapped in tin foil and baked in the coals of a fire (try it, it’s good).  Then we paddled down to Highway 130, where we pulled off the river south of the town of Old Dock.  After connecting this week, Phil sent me the photo below, taken at the end of that river trip.  I’d forgotten about that shirt (Kudzu Alliance, which was an anti-nuke organization) and that hat (I wonder where it went?).   The canoe in the front is mine.  I had purchased it when I was sixteen.  A few years later, it was stolen. I then brought the Mad River that I still have.  It was exciting to look at this photo and remember.
Last year I reviewed The River Home, a book by a man who grew up on the Waccamaw in South Carolina and, as an adult, came back and paddled the entire length of the river from the lake to Georgetown.
Posted by sage at 6:00 AM