This is my 1000th post.  I started this blog in 2004 and I had no idea I’d still be writing in it eight and a half years later.  Over the years I have written a variety of posts:  memoirs, adventures, trips, poetry, satire, political commentary and book reviews.  In 2011, I took a break from this blog to start a new blog (riding rails) which highlighted my sabbatical journey from Indonesia to Europe and on back to the United States via ship.  After getting back, I never finished the story (the last post, I was leaving Dover on a ship.  This is one of the missing stories as I tell about visiting the Faroe Islands in the North Atlantic. 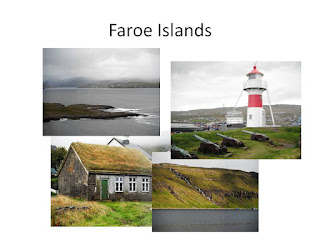 I take breakfast at the buffet on the promenade deck, sitting strategically where I can see out both sides of the ship.  Off starboard, to the east, a cloud bank lies over the ocean, obscuring the sunrise.  The skies are clear to port.   Savoring my coffee, I alternate between reading Simon Winchester’s The Atlantic and starring out across the water.  I’m surprised when land appears off port, one of the outward islands of the Faroe archipelago, our destination for the morning.

The Faroe Islands are rocky series of volcanic rock that rise like fingers above the Atlantic halfway between Norway and Iceland.  The islands tend to be long, running from the southwest to the northeast.   They are narrow enough that there is no place on the islands that one is more than three miles from the sea.   There are few trees on the islands, mostly just thick grass and rock.  People have lived on the island for at least 1200 years, maybe more.  Legend is that the first settlers were monks from Ireland who sailed there in 461 AD, but there is some question as to the validity of such claims.  It is known the Vikings settled here late in the first millennium of the modern era.  Since then, the population on the island has been somewhat stable as they make a living from fishing and raising sheep.

We sail past the islands of Suduroy and Sandoy and a few smaller ones.  The sun rises over the fog as we sail into the port of Torshavn, capital of the Faroes.  The city is beautiful, with its neat houses nestled between the water and the mountains alive in the morning light.  Soon we’re docking, the deckhands handing the heavy ropes to moor the ship the bulkhead.  I head back to my cabin and pack a bag for a day of sightseeing.  We’ll have a little over seven hours before we sail and, as I did not arrange for a tour, I’m not sure what I’ll see.  But we’ve been informed there is a lot of shopping and exploring in the capital city.  The only commercial tour available was to see puffins.  Those signing up for this, at an additional cost of $250, would not have time to see the city at all as they’d spend the day on a boat around the cliffs of the island.  The price seemed steep and when I later learned they only saw a couple of puffins as the rest of the birds had already migrated, I was even more glad that I skipped out on the tour. 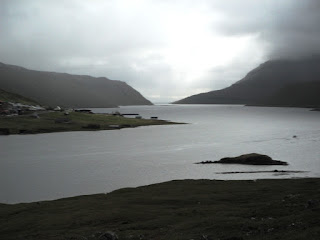 Getting off the boat, I head with a group of people to the tourist office to pick up a map and to get the local scoop on the trip.  There, someone tells us about the bus service in the Faroes.  In a few minutes, there’ d be a bus leaving for Kloksvik, some 90 km away in the northern islands and we were promised a wonderful ride that will show off the best of the islands.  It’s only 90 Krones (about $15), but we have to exchange money into the local currency as the driver won’t accept pounds, euros or dollars.  The Faroes have independent home rule but are a part of the Kingdom of Denmark and depend on their mother country for defense, judicial proceedings and currency.  Over the centuries, the islands have been a political football that’s been kicked back and forth between Norway and Denmark.  During World War II, after the fall of Denmark, the British “invaded” the islands, in a friendly take-over that kept Germany from claiming the islands and having an outpost in the North Atlantic.
Having obtained some local currency from ATM, about a dozen of us from the ship get on the bus along with a couple of locals.  The group from the ship include an extended Chinese family, from Hong Kong and Vancouver, who have become with my daughter and a few other stragglers.  We take off, climbing up the steep hills behind Torshavn, the hairpin turns providing a grea view of the view of the city below.  The roads in the Faroes are surprisingly good.  The islands are warmed by the Atlantic current which keeps the temperature moderate.  It’s never hot, nor is it very cold.   Winter temperatures are generally above freezing and they only occasionally have a dusting of snow.  Summers are warmer, but temperatures seldom rise above the low 60s (10-12 C).  It is often rainy or foggy, giving the island s a mysterious appearance.   Soon after we leave on the bus, the morning sun disappears and t he rain begins.  Throughout the day, it’ll be rainy or foggy or sunny, all subject to change on a moment’s notice. 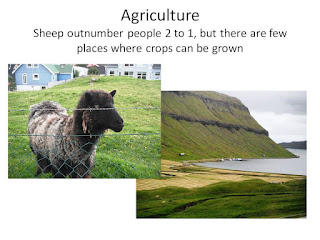 Because of the steep mountains, there are a number of tunnels on the islands, both between mountains and under the sea that separates them.  Our bus takes us to the center of the island of Streymoy, then down through Kollafjerour and along the south bank of Sundini, a fjord separating Streymoy and Eysturoy.   We pass a couple of small fishing villages and a waterfall that tumbles down over the side of the cliffs rising up from the fjord.  Although most of the homes are modern, we see a few traditional houses with sod roofs.  There’s a little farming, mostly hay, but lots of sheep.  The word Faroe comes from the Norwegian word for sheep. 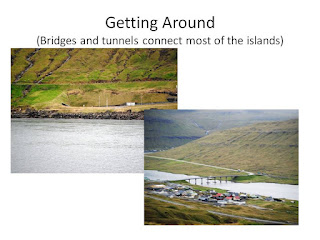 We are surprised to see a small bridge at the narrow part of the fjord, which the driver brags that it crosses the ocean (which it does as both ends of the fjord are open).  We cross over to a new island and stop in the rain to drop off and pick up a few passengers.  Leaving the village of Tordskali, there’s a long tunnel cuts through the mountain.  On the other side, it’s dry and the sun is shining (for a few minutes anyway.  The road runs to the southeast, along the northwest bank of Skalafijordur (another fjord), before cutting over a peninsula of land and by a few more villages.  At Leitvik, we drop into a longer tunnel that runs under the sea to the Island of Bordoy.  Coming out of this tunnel, it’s just a short distance to the town of Kloksvik, our destination.  We have an hour to explore this small fishing community, before the bus returns.  The highlight of the town is a Lutheran Church with a Viking boat hanging in the rafters.  About 85% of the population is Lutheran, with the next largest religious group being members of the Plymouth Brethren.  We walk around looking at boats and stopping in a few stores, picking up some snacks to eat on the way. 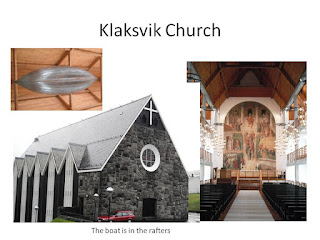 As we make our way back to the bus station, the rain returns.  Our return trip is just the reverse, except that it’s raining even more.  As we wait, I strike up a conversation with a young Dutch couple who are backpacking.   They’re spending a few weeks in the Faroes, hiking around (and taking the bus through the tunnels).  Sometimes they camp, other times they stay in hostels or hotels.  They take the bus to the next island and then get off and we see them head up into the hills as we drive away.  As we enter Torshavn, with a few hours to spare before boarding, the driver suggests a shopping mall and we all get out and eat.  Afterwards, most everyone shops for wool yarn or handiwork, but I decide to walk to the lighthouse and an old fort that guards the port.  We meet up later on the ship.

As the ship leave Torshavn, we still not done with the Faroes.  The captain sails around the southern point of the island of Streymoy, then steams north through Hestsfjordur, Vagafjordur, and Vestmannasund, a series of fjords that will allow us to pass through the Faroes, between Streymoy and Vagar.  I head up to top deck on the ship.  It’s cold and exposed, but the views are incredible as we sail by small villages and remote homes, watching sheep graze on the steep hills.  On the intercom, our resident geologist (he got on the ship in Ireland and will sail with us to Nova Scotia), tells us about the islands and explains their geology as well as their history and culture.  We see where another tunnel under the ocean, that connects Vagar to Streymoy, descends below the depths.  Two hours after leaving Torshavn, we leave the fjord and are
back on the open ocean, sailing to toward Iceland.