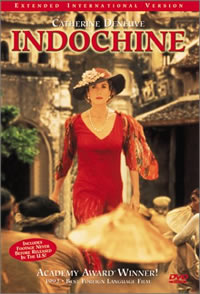 It's been a while since I've done a movie post and rainy day and river flooding posts would get old...


I made an exception to my “avoid all things French” rule and watched this film. I’m glad I did. I fell in love with Catherine Deneuve. What a beautiful woman! In the movie she plays Elaine, a wealthy French woman living in Vietnam in the 1930s. Unmarried, but with suitors and lovers, Elaine raises a Vietnamese girl (Camille) after her parents are killed. A marriage at birth has been arranged for Camille and Tanh, a Vietnamese boy who is sent to France to study. Thrust into this mix is a young French Naval Officer in Vietnam, Jean-Baptiste. He is one of Elaine’s lovers and later, after coming to her aide, becomes a lover of Camille. Elaine arranges it that Jean-Baptiste is sent to a forsaken naval outpost in the north. Camille, with Tanh’s blessings, goes north after him. Camille is tricked into being sold as an indentured servant to plantation owners in the south and then sees the brutality of the French control. She is also reunited with Jean-Baptiste and kills another French officer (who was responsible for the death of Camille’s friends). She and Jean-Baptiste run away and become a legend amongst those in the Vietnamese communist party. The country is on the edge of a revolution. They travel with a theater group and almost make it to China when French soldiers catch up with Jean-Baptiste and his son (Camille gets away). Jean-Baptiste gives the boy to Elaine, but before he’s taken back to France for trial, he’s given 24 hours of freedom to get his affairs in order. After keeping his son for the evening, Elaine finds him the next morning with a bullet in his head while the son is in the bed beside him. Although she knows better, his death is ruled a “suicide.” The movie ends with Elaine and her son back in France. Its 1954 and Camille is a leader in the Vietnamese Communist Party and is in Geneva to work out the peace accord with France. Camille takes her grandson to meet his mother. He goes into the hotel and then comes out and says that she is his mother.

The setting for this movie is beautiful. The scenes of the workers, wearing headlamps, going into the rubber tree forest on foggy nights to re-slash the trees in order for them to produce more sap is mystical. The mountain scenes and the views of Ha Long Bay are breath-taking. I could watch the movie many times just to enjoy the scenery, which stands in contrast to the conflict that is rising (and will eventually lead to the French defeat and later to the American involvement in Vietnam). The brutality of the French rule is exposed. Although I enjoyed the movie, the story line is like that of a soap-opera. Also, the film seemed to have some jagged edges as it jumped around (from Elaine telling her grandson about his past to actually being in the past).

Overall, I recommend this movie, but only for the scenery. It makes me even more interested in going to Vietnam.
Posted by sage at 9:48 AM