A rant on last night's ballgame 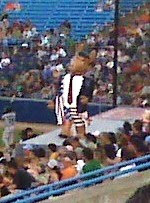 Life is a whirlwind and I haven’t had time to do any writing for my blog nor have I been very good at keeping up with those blogs I enjoy reading… And the next few weeks look crazy and although great things are happening, this summer promises to be the craziest on record.

Yet, I did get out yesterday evening a minor league baseball game; the West Michigan Whitecaps taking on the Dayton Dragons. The Whitecaps lost it in the ninth and also lost a catcher as he was creamed trying to block home plate. That said, has one heck of a 3rd basemen in Frank Pfister. With his glove and arm, if last night was at example of his talent, I doubt he’ll play at the Single A level very long if the Reds (their franchise team) has need of a 3rd baseman.

Minor league ball has a lot of silly stuff that would never be tolerated in the big leagues. Most of it is fun, but I had to take an exception with “President Barack Ollama.” The donkey (or was it a llama) was dressed in a blue suit with red white and blue boxer shorts made his debut at in the 7th inning, leading the singing of “Take Me Out to the Ballgame” from one of the cooperate balconies. Then, the character started dancing and showing his boxers and vomited confetti onto the crowd below. Later, he appeared on the Visiting Team dugout, singing and wetting those sitting around the dugout. As I didn’t have my camera, the pictures I have of him are from my blackberry (and are not very good). I found the whole skit to be disrespectful and, although I enjoy parody, lacking of taste. It felt like something from a minstrel show of the 1920s. Proudly, my daughter and her friend both made the similar comments. She couldn’t believe I was taking a picture of something so rude (she didn’t know that I wanted it for evidence).

I should say, we didn't come away from the game empty handed. They gave out "Sparta brand Barbecue Sauce." I should be grateful, but now for the rant. I read the ingredients and wasn't impressed. I've had candy with less sugar. And where were the peppers? Being from Eastern North Carolina, the number one ingredient in barbecue sauce has to be vinegar. If you want to be fancy, use apple cider vinegar. I'll even use a little tomato sauce, but corn syrup, never! Well, maybe someday I can use this bottle to make some of those sweet meatballs... But as barbecue sauce, never.